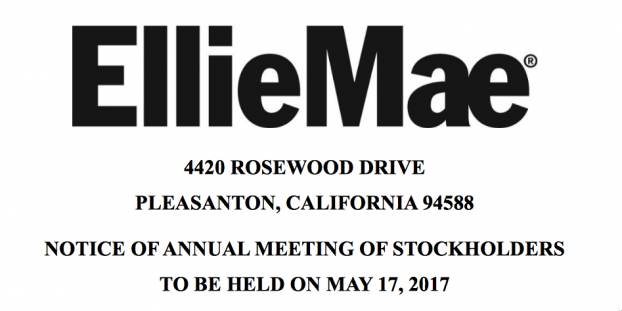 EllieMae, Inc. (ELLI) provides on-demand software solutions and services for the residential mortgage industry in the United States. EllieMae is one of the stocks in my portfolio. ProxyDemocracy.org had collected the votes of one fund family when I checked and voted. Their annual meeting is coming up on May 17, 2017, so vote now.

I voted FOR #4 to declassify the board. See how and why I voted other items below. I voted with the Board’s recommendations % of the time. View proxy via SEC’s EDGAR system (look for DEF 14A).

EllieMae’s Summary Compensation Table (p. 47) shows the highest paid named executive officer (NEO) was CEO Jonathan Corr at $4.3M in 2016. I am using Yahoo! Finance to determine the market cap ($3.7B) and I am roughly defining large-cap as $10B, mid-cap as $2-10B, and small-cap as less than $2B.EllieMae is a mid-cap company. According to the Equilar Top 25 Executive Compensation Survey 2015, the median CEO compensation at mid-cap corporations was $5.3M in 2015, so pay was below that amount. EllieMae shares outperformed the NASDAQ over the most recent one, two, five and ten year time periods.

Egan-Jones also recommended that clients vote FOR all directors. However, that endorsement was qualified with the following statement:

#4 Declassify the Board of Directors

James McRitchie (that’s me) is the proponent. I voted ‘FOR.’ Only 31% of the S&P 1500 have a classified board. Per the chat below, classified boards are rare at S&P 500 companies. Here’s what Egan-Jones said:

Recommendation: After evaluating the details given about the shareholder proposal, we believe that corporate governance procedures and practices, and the level of accountability that the Company imposes, are closely related to financial performance. It is intuitive that when directors are accountable for their actions, they perform better. We therefore prefer that the entire board of a company be elected annually to provide appropriate responsiveness to shareholders. As such, we recommend a vote FOR this Proposal. 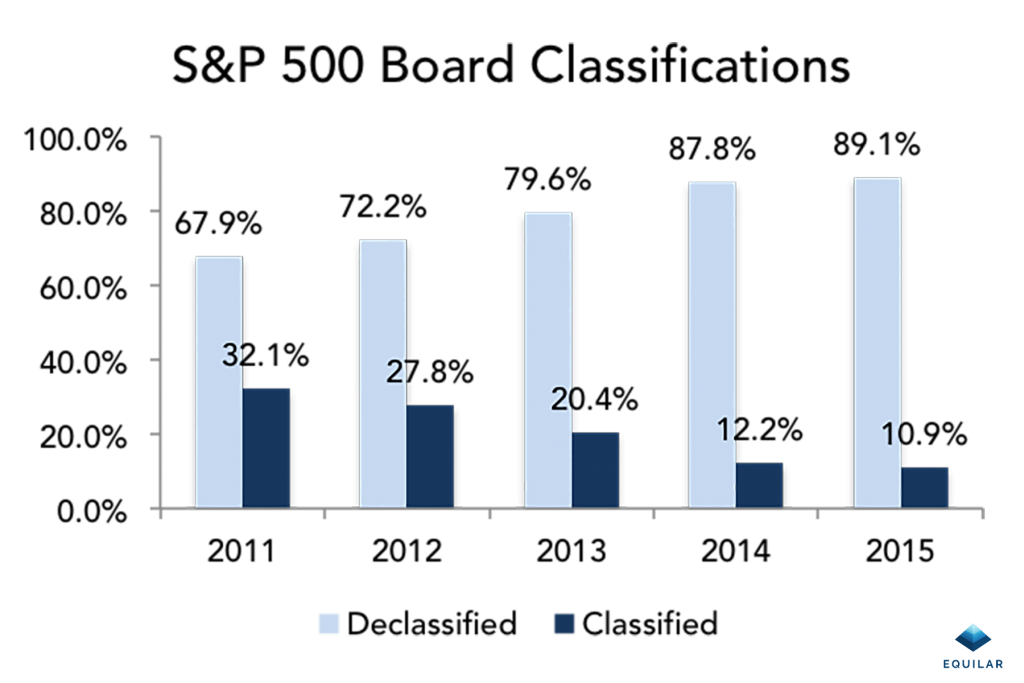 Background: The shareholders are being asked that the Company take the steps necessary to reorganize the Board of Directors into one class with each director subject to election each year. Although the company can adopt this proposal topic in one-year and many investors are in favor of a one-year implementation, this proposal allows the option to phase it in over 3-years.

Arthur Levitt, former Chairman of the Securities and Exchange Commission said, “In my view it’s best for the investor if the entire board is elected once a year. Without annual election of each director shareholders have far less control over who represents them.”

A total of 79 S&P 500 and Fortune 500 companies, worth more than one trillion dollars, adopted this proposal topic since 2012. Annual elections are widely viewed as a corporate governance best practice. Annual election of each director could make the directors more accountable, and thereby contribute to improved performance and increased company value.

This proposal may get strong support at the 2017 annual meeting. For instance in 2016 the Company gave strong majority support to another corporate governance improvement proposal – proxy access for shareholders.

EllieMae: Votes Against Board Position in Bold

As mentioned above, ProxyDemocracy.org had collected the votes of one fund when I voted.  Proxy Insight reported additional votes from CalSTRS, Teacher Retirement System of Texas (TRS), and Calvert. Each voted FOR all items, including Item #4 to declassify the board of directors.

To be considered for inclusion in our proxy materials for next year’s annual meeting in accordance with Rule 14a-8 under the Securities Exchange Act of 1934, as amended (the “Exchange Act”), your proposal must be submitted in writing by December 7, 2017, to our Secretary, at Ellie Mae, Inc., 4420 Rosewood Drive, Suite 500, Pleasanton, California 94588 and must otherwise comply with the requirements of Rule 14a-8 of the Exchange Act.