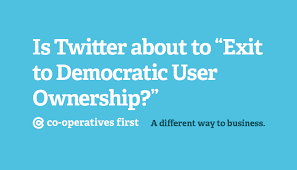 Exit to Democratic Ownership; here is a preview of my presentation to the annual meeting of Twitter shareholders, to be held on May 22, 2017, at 1355 Market Street, San Francisco, California 94103. The meeting starts at 10 AM. Bring photo ID.

I am James McRitchie, speaking in favor of proposal #4, Exit to Democratic Ownership, co-filed with Steffen Sauerteig of Germany on behalf of thousands of users around the world as a part of BuyTwitter.org and #WeAreTwitter. Shareholders or members of the press interested in contacting me after this meeting, can email  jm@corpgov.net.

We are part of a world-wide movement to save Twitter from losing sight of its mission and being turned into another democratic-free zone.

That mission is very connected to democracy. Twitter is spreading First Amendment rights around the world. Access to information and the exercise of free speech are key to government and an Internet “by and for the people.”

However, Twitter is in trouble. $1,000 invested in Twitter at IPO is now worth about $540, whereas the same amount invested the Nasdaq is worth about $1570. With 330 million users sending a billion tweets every few days, our company can do better. Shareholders, employees and users are frustrated. Twitter is not performing to its potential.

Cooperatives, typically owned by their users or employees, also have roots in promoting democracy. According to the global consulting firm McKinsey, cooperatives perform substantially better at growing market share than publicly traded companies. When customers are owners, companies are more in touch with customer needs. When employees are owners, they are more incentivized to collaborate and push new ideas.

Giving Twitter users and employees a formal voice through ownership and representation on the Board could accelerate growth to outpace other social media companies.

Our proposal simply asks for a study to explore options. Those options could range from reincorporating as a cooperative to selling preferred shares to users and setting up an employee stock ownership plan (ESOP) for employees, allowing both groups to directly elect representatives to the Board.

Unlike most large companies, Twitter has no proxy access bylaws. It does not allow long-term shareholders holding 3% of shares for 3 years to place nominees on the proxy.

Unlike most large companies, Twitter requires an 80% vote to amend it bylaws, instead of a majority vote.

Twitter has much to learn from studying more democratic forms of corporate governance, such as governance at cooperatives.

The cost of a study is minor; the potential gains are huge. Vote to study cooperative models and their possible applicability to Twitter; vote FOR proposal #4, Exit to Democratic Ownership.