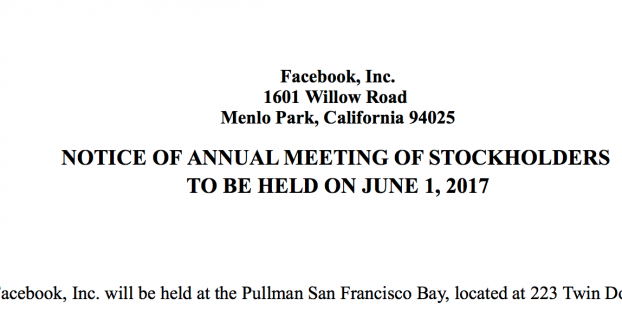 Facebook Proxy Voting Guide by James McRitchie of CorpGov.net. Facebook, Inc. provides various products to connect and share through mobile devices, personal computers, and other surfaces worldwide. Facebook is one of the stocks in my portfolio. ProxyDemocracy.org had collected the votes of two fund families when I checked and voted. Their annual meeting is coming up on June 1, 2017. 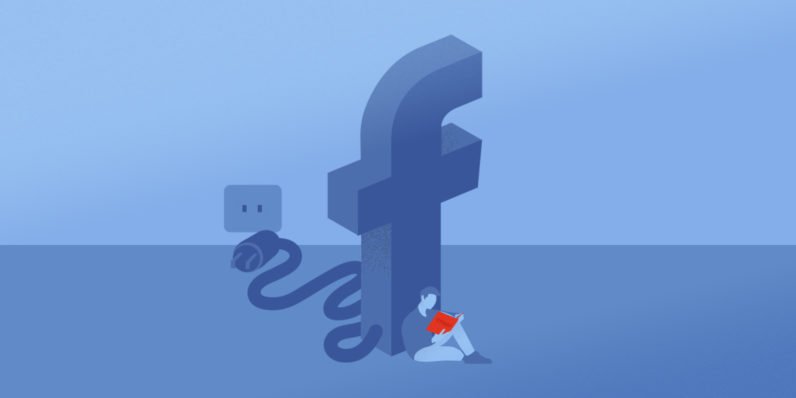 I voted AGAINST the Board’s recommendations 100% of the time. Until all stock has equal voting weight (vote FOR #3 to cure), Facebook will remain essentially a dictatorship. Facebook is in the sharing business. How about sharing some of that enormous power with shareholders, users and employees? As a democratic-free zone, Facebook faces a potential backlash, especially if other options become available. View Proxy Statement via SEC’s EDGAR system (look for DEF 14A).

Facebook’s Summary Compensation Table (p. 27) shows the highest paid named executive officer (NEO) was COO Sheryl K. Sandberg at $24.5M in 2016. I am using Yahoo! Finance to determine the market cap ($441B) and I am roughly defining large-cap as $10B, mid-cap as $2-10B, and small-cap as less than $2B. Facebook is definitely a large-cap company. According to EY Center for Board Matters, the 3-yr average CEO compensation at large-cap corporations is $12.7M, so pay was well above that amount. Facebook shares outperformed the NASDAQ over the most recent one, two, five, and ten year time periods.

I would have voted “AGAINST” a say-on-pay item if we had the right to vote on pay, which we don’t. The “Lake Woebegone effect,” where everyone is above average and the averages are recalculated upward every year, has to stop. We cannot just keep voting in favor of higher and higher pay packages. I could understand paying more than median, since Facebook has done well but that much more. I voted against all the compensation committee members: Andreessen, Hastings, and Thiel.

I have no reason to believe the auditor has rendered an inaccurate opinion or is engaged in poor accounting practices. Egan-Jones recommends voting against, favoring auditor rotation after seven years. I am not quite ready to set that as the bar, but also voted AGAINST, since the auditor serves at the pleasure of founder Mark Zuckerberg and see that as a potential conflict of interest.

As mentioned above, I voted “Against” the compensation committee.

Egan-Jones concluded as follow, with regard to Board nominees:

Inside director Mark Zuckerberg is a current Chairman of the Board and CEO of the Company, and combined with the Board Rating of Some Concerns the Company has received, we recommend that clients WITHHOLD votes from this nominee. We believe that there is an inherent potential conflict, in having the CEO or former CEO serve as the Chairman of the Board. Consequently, we prefer that companies focus on the following areas to improve its corporate governance practices: separate the roles of the Chairman and CEO, hold annual director elections, have one class of voting stock only, have key board committees consisting of independent directors and majority of independent directors on board and include non-binding compensation vote on agenda to further ensure board independence and accountability.

Moreover, we recommend that clients WITHHOLD votes from Affiliated outside director Peter A. Thiel, current member of the Compensation & Governance Committee of the Board. We believe that key Board committees namely Audit, Compensation, and Nominating Committees should be comprised solely of Independent outside directors for sound corporate governance practice.

I voted against all the Board nominees. Facebook founder Mark Zuckerberg personally controls the firm with over 52% of the vote, though he owns only 14.36% of the economic value of the firm. Under those circumstances, directors are not really independent. They serve at Zuckerberg’s pleasure.

NorthStar Asset Management is the lead filer on this proposal. I and others co-filed. By allowing certain stock to have more voting power than others, the company takes our money but does not give us an equal voice in the company’s management. Facebook founder Mark Zuckerberg personally controls the firm with over 52% of the vote, though he owns only 14.36% of the economic value of the firm.

Without a voice, shareholders cannot hold management accountable. This is most apparent in last year’s vote to approve a third, non-voting, share of stock which has been described as a move that specifically sought to ensure that Mr. Zuckerberg retain control of the Company despite his plan to transfer the majority of his Facebook stock over time to the “Chan Zuckerberg Initiative LLC, an actual corporation under his control that can even turn a profit.”

Vote ‘FOR’ to send a message that Facebook shareholders believe each share should carry equal weight. Let’s do what we can to end the dictatorship, which may be benevolent right now but may not be tomorrow. Facebook should not be a democratic-free zone. Those aren’t good either for shareholders or society in the long-run.

Additional disclosure of the company’s lobbying-related policies and oversight mechanisms, along with its trade association memberships and payments, would help shareholders better assess the risks and benefits associated with the company’s participation in the public policy process. Vote FOR.

A vote FOR the shareholder proposal is warranted as shareholders would benefit from additional disclosure related to the operational and reputational risks posed to the company by fake news.

A vote FOR this resolution is warranted, as Facebook lags its peers in addressing gender pay disparity at the company. By not keeping pace with its peers, Facebook is put at a competitive disadvantage in the recruitment and retention of employees.

Facebook Proxy Voting Guide: Votes Against Board Position in Bold

As mentioned above, ProxyDemocracy.org had collected the votes of two fund families when I voted.  Proxy Insight reported additional votes from Canada Pension (CPPIB), Teacher Retirement System of Texas (TRS), and others. All voted FOR #3 to move to one-share, one vote.

You may present proposals for action at a future meeting or submit nominations for election of directors only if you comply with the requirements of the proxy rules established by the SEC and our amended and restated bylaws, as applicable. In order for a stockholder proposal or nomination for director to be considered for inclusion in our proxy statement and form of proxy relating to our annual meeting of stockholders to be held in 2018, the proposal or nomination must be received by us at our principal executive offices no later than December 15, 2017.