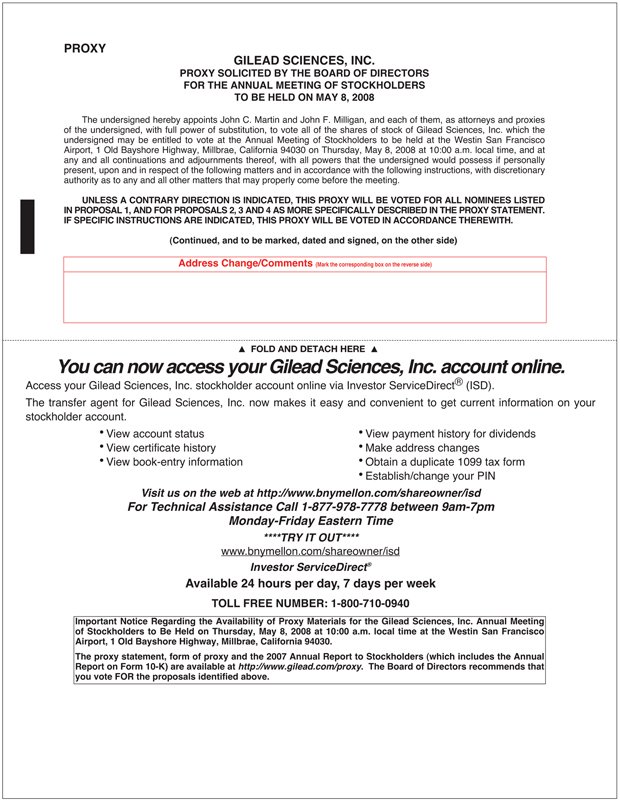 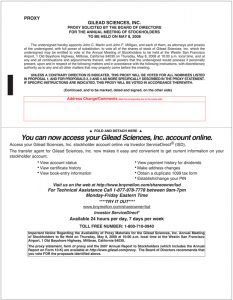 Gilead Sciences Proxy Voting Guide by James McRitchie. Gilead Sciences, Inc., a research-based biopharmaceutical company, discovers, develops, and commercializes medicines in the areas of unmet medical needs in Europe, North America, Asia, South America, Africa, Australia, India, and the Middle East. Gilead $GLD is one of the stocks in my portfolio. ProxyDemocracy.org had collected the votes of four fund families when I checked and voted. The annual meeting is May 10, 2017, so vote NOW! If you have already voted, you can change your vote online until May 9.

I voted FOR Written Consent and requiring an Independent Chairman. See how and why I voted these and other items below. I voted with the Board’s recommendations 47% of the time. View Proxy Statement via SEC’s EDGAR system (look for DEF 14A).

From the Yahoo Finance profile: Gilead Sciences, Inc.’s ISS Governance QualityScore as of May 1, 2017 is 2. The pillar scores are Audit: 1; Board: 5; Shareholder Rights: 3; Compensation: 4. Brought to us by Institutional Shareholder Services (ISS). Scores range from “1” (low governance risk) to “10” (higher governance risk). Each of the pillar scores for Audit, Board, Shareholder Rights and Compensation, are based on specific company disclosures. That gives us a quick idea of where to focus: the Board and Compensation.

Gilead’s Summary Compensation Table shows the highest paid named executive officer (NEO) was CFO John F. Milligan at $13.9M in 2016. I am using Yahoo! Finance to determine the market cap ($87.8B) and I am roughly defining large-cap as $10B, mid-cap as $2-10B, and small-cap as less than $2B. Twitter is a large-cap company. According to the Equilar Top 25 Executive Compensation Survey 2015, the median CEO compensation at large-cap corporations was $10.3M in 2015, so pay was above that amount. Gilead shares outperformed the NASDAQ over the most recent five and ten year periods but have vastly underperformed in the most recent one and two year time periods.

The Company’s Approval of a Restatement of the Gilead Sciences, Inc. 2004 Equity Incentive Plan earns an AGAINST recommendation due to its dilutive effect to the interests of the shareholders, as such, we recommend that clients WITHHOLD votes from the members of the Compensation Committee, namely Independent outside directors Kevin E. Lofton and Per Wold-Olsen, and Affiliated outside director Nicholas G. Moore.

I agreed, without reservation.

#6 Right to Act by Written Consent

James McRitchie (that’s me) is the proponent. Of course, I voted ‘FOR.’ Egan-Jones also recommended FOR.

We have determined that it is a positive corporate governance measure to allow the stockholders to have the ability to take action by written consent, if such written consent or consents sets forth the action to be taken and is signed by the holders of outstanding stock having not less than the minimum number of votes that would be necessary to authorize or take such action at a meeting at which all shares entitled to vote on the matter were present and voted. As such, we recommend a vote FOR this Proposal.

John Chevedden is the proponent. I voted FOR. Egan-Jones also recommended FOR.

We believe that there is an inherent potential conflict, in having an Inside director serve as the Chairman of the board. Consequently, we prefer that companies separate the roles of the Chairman and CEO and that the Chairman be independent to further ensure board independence and accountability.  We recommend a vote FOR this Proposal.

As mentioned above, ProxyDemocracy.org had collected the votes of four funds when I voted.  Proxy Insight (PI below) reported additional votes from Canada Pension (CPPIB), Teacher Retirement System of Texas (TRS), CalSTRS, CalPERS and others. All voted FOR all items, including shareholder proposals #5 & #6.

You may submit proposals for consideration at future stockholder meetings. For a stockholder proposal to be considered for inclusion in our Proxy Statement for the 2018 annual meeting of stockholders pursuant to SEC Rule 14a-8, the Corporate Secretary must receive the written proposal at our principal executive offices no later than November 27, 2017. Such proposals also must comply with SEC regulations under Rule 14a-8 under the Securities Exchange Act of 1934, as amended (the “Exchange Act”), regarding the inclusion of stockholder proposals in company proxy materials. Proposals should be addressed to: Corporate Secretary, Gilead Sciences, Inc., 333 Lakeside Drive, Foster City, California 94404.