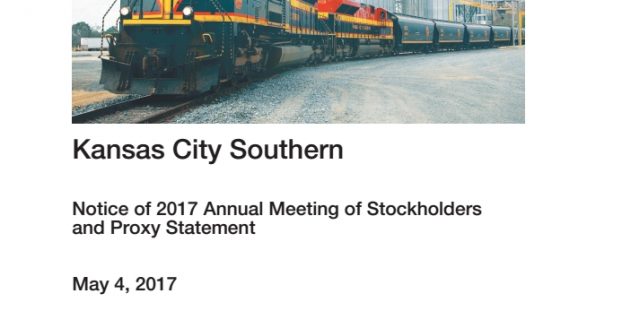 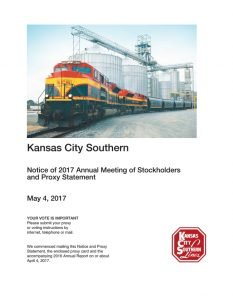 Kansas City Southern Proxy Voting Guide by Corporate Governance (CorpGov.net). Kansas City Southern (KSU), through its subsidiaries, provides freight rail transportation services between Kansas City, Missouri, and various ports along the Gulf of Mexico in Alabama, Louisiana, Mississippi, and Texas, as well as between Mexico City and Laredo. KSU is one of the stocks in my portfolio. ProxyDemocracy.org had collected the votes of three fund families when I checked and voted. Their annual meeting is coming up on May 4, 2017

I voted FOR Proxy Access Amendments: AGAINST pay, compensation committee and other items. See how and why I voted all items below. I voted with the Board’s recommendations 38% of the time. View Proxy Statement via SEC’s EDGAR system (look for DEF 14A).

Starbucks’ Summary Compensation Table shows the highest paid remaining named executive officer (NEO) was CEO Patrick J. Ottenmeyer  at $5.9M in 2016. I am using Yahoo! Finance to determine the market cap ($9.5B) and I am roughly defining large-cap as $10B, mid-cap as $2-10B, and small-cap as less than $2B. KSU is a mid-cap company. According to the Equilar Top 25 Executive Compensation Survey 2015, the median CEO compensation at mid-cap corporations was $5.3M in 2015, so pay was slightly above that amount. KSU shares underperformed the NASDAQ over the most recent one, two, five, and ten year time periods. That makes me wonder why I still own it. KSU is a relative monopoly. If the current management cannot beat the averages, maybe it is time for turnaround managers.

I voted “AGAINST” the say-on-pay item. The “Lake Woebegone effect,” where everyone is above average and the averages are recalculated upward every year, has to stop. We cannot just keep voting in favor of higher and higher pay packages. Total shareholder return has been poor. As Calvert points out:

The company awarded its former CEO an $850,000 cash bonus in connection with his retirement. Additionally, supplemental performance awards rely on goals of questionable rigor, given that two of the tranches vested within three months of the grant date. Finally, the new CEO’s special equity award includes a retesting feature that provides multiple opportunities to earn the award.

Furthermore, we note that the Mr. Druten is the Company’s Chairman who holds more than one other public directorship. We believe that the Chairman, being responsible for the leadership of the Board and the creation of the conditions necessary for overall board and individual director effectiveness, should hold no more than one other public directorship to ensure the valuable and prudent exercise of his fiduciary duties as a Chairman and that his integrity and efficiency are not compromised.

Egan-Jones recommended FOR but I voted AGAINST, since the stock plan simply compounds the CEO’s total compensation.

James McRitchie (that’s me) is the proponent. Of course, I voted ‘FOR.’ KSU has a “lite” version of proxy access. The following amendment would provide more robust proxy access: 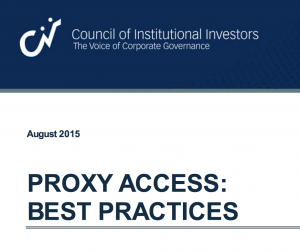 Current bylaws limit nominating groups to 20 members. The Council of Institutional Investors studied such provisions and found their members, who hold in excess of $3 trillion in assets, would not be able to meet the requirement of 3% held for 3 years with a 20-member limit. The proposal seeks lifting the cap on the number of members that can form a group to 40 or 50.

Most of the largest institutional investors (Vanguard, Fidelity, BlackRock, SSgA etc.) have never even filed a proxy proposal, so would be highly unlikely to participate in a nominating group even if KSU performance plummets for years.

If the cap were eliminated chances of being able to form a nominating group would increase substantially. Even without invoking proxy access, a stronger bylaw would encourage directors to look at shareholders, instead of the CEO, as their boss. Vote FOR #5.

As mentioned above, ProxyDemocracy.org had collected the votes of three funds when I voted.  Proxy Insight reported additional votes from Canada Pension (CPPIB) and Teacher Retirement System of Texas (TRS)  voted. Both vote AGAINST the pay plan and FOR #6 amendments to KSU’s proxy access bylaws.

If a holder of our Common Stock wishes to present a proposal for inclusion in our proxy statement for next year’s annual meeting of stockholders, the proposal must be made in accordance with the applicable laws and rules of the SEC and the interpretations thereof, as well as our Bylaws. Any such proposal should be sent to our Corporate Secretary at P.O. Box 219335, Kansas City, Missouri 64121-9335 (or if by express delivery to 427 West 12th Street, Kansas City, Missouri 64105) and must be received no later than December 5, 2017.