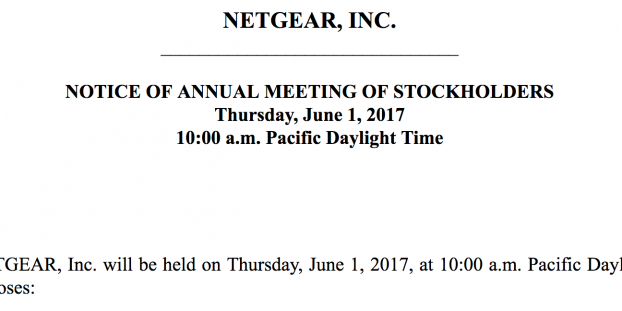 Netgear Proxy Voting Guide by James McRitchie of CorpGov.net. NETGEAR, Inc. (NTGR) designs, develops, and markets innovative networking solutions and smart connected products for consumers, businesses, and service providers. NTGR one of the stocks in my portfolio. ProxyDemocracy.org had collected the votes of one fund family when I checked and voted. Their annual meeting is coming up on June 1, 2017. 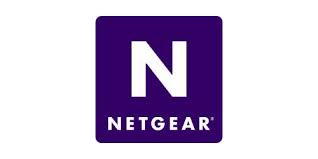 I voted FOR James McRitchie’s shareholder proposal to provide a right to special meeting for shareholders with 15% of the common voting stock. See how and why I voted other items below. I voted with the Board’s recommendations 64% of the time. View Proxy Statement via SEC’s EDGAR system (look for DEF 14A).

Netgear’s Summary Compensation Table shows the highest paid named executive officer (NEO) was Chairman and CEO Patrick C.S. Lo, at $4.5M in 2016. I am using Yahoo! Finance to determine the market cap ($1.4B) and I am roughly defining large-cap as $10B, mid-cap as $2-10B, and small-cap as less than $2B. Netgear is a mid-cap company. According to EY Center for Board Matters, the 3-yr average CEO compensation at mid-cap corporations was $6.2, so pay was well below that amount. Netgear’s shares outperformed the NASDAQ over the most recent two time period but underperformed over the last one, five, and ten year time periods.

and as such, we believe that shareholders should support the current compensation policies put in place by the Company’s directors. Furthermore, we believe that the Company’s compensation policies and procedures are centered on a competitive pay-for-performance culture, strongly aligned with the long-term interest of its shareholders and necessary to attract and retain experienced, highly qualified executives critical to the Company’s long-term success and the enhancement of shareholder value. Therefore, we recommend a vote FOR this Proposal.

I agreed, and voted FOR.

As mentioned above, I voted “For” the pay package. I also voted a say-on-pay frequency of one year (item #4) With regard to director nominees, Egan-Jones recommended that clients

Netgear currently offers know right for shareholders to hold a special meeting and probably would not have proposed a right of 25% of shares to do so, had I not filed my proposal.

I voted against #5, as explained below.

As indicated above, Netgear probably would have not proposed a right of 25% of shares to call a special meeting.  A right of 15% seems a reasonable compromise above the minimum 10% threshold allowed by Delaware. As last reported, BlackRock held 12% and Vanguard held 10% of Netgear. Neither are activist funds so will not be calling a special meeting unless Netgear craters.

Many funds will vote in favor of both proposals #5 and #6 to ensure we get some sort of special meeting right. I would advise against that. If both proposals get an equal vote, the Board will assume shareholders have no preference. If proposal #6 gets a higher vote, the Board is more likely approve 15% as the threshold. Or, they could compromise with a 20% threshold. However, no compromise is likely if proposal #5 gets a higher vote.

Vote FOR proposal #6. to to allow the right of 15% of shares to call a special meeting.

Netgear Proxy Voting Guide: Votes Against Board Position in Bold

As mentioned above, ProxyDemocracy.org had collected the votes of four funds when I voted.  Proxy Insight reported additional votes from CalSTRS, Calvert and others. All voted FOR #6, my proposal for special meetings. I was glad to see CalSTRS voted Against #5, probably using the same logic I discussed above.

As a stockholder, you may be entitled to present proposals for action at a forthcoming meeting if you comply with the requirements of the proxy rules established by the Securities and Exchange Commission. Proposals by our stockholders intended to be presented for consideration at our 2018 Annual Meeting must be received by us no later than December 22, 2017 (120 calendar days prior to the anniversary of the mailing date of this proxy statement), in order that they may be included in the proxy statement and form of proxy related to that meeting. The submission of the stockholder proposal does not guarantee that it will be included in our 2018 proxy statement.