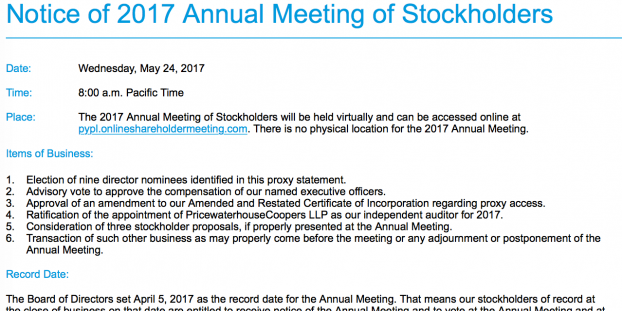 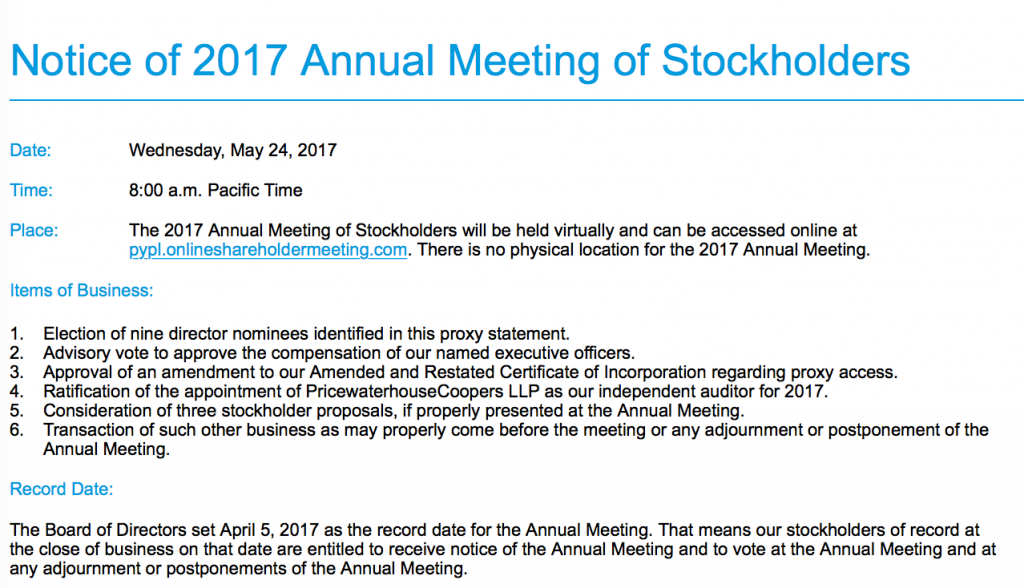 PayPal Proxy Voting Guide by CorpGov.net. PayPal Holdings, Inc. (PYPL) operates as a technology platform company that enables digital and mobile payments on behalf of consumers and merchants worldwide. PayPal is one of the stocks in my portfolio. ProxyDemocracy.org had collected the votes of three fund families when I checked and voted. Their annual meeting is coming up on May 24, 2017.

I voted FOR #5 Provide Right to Act by Written Consent and two shareholder proposals seeking reports. See how and why I voted other items below. I voted with the Board’s recommendations 40% of the time. View proxy via SEC’s EDGAR system (look for DEF 14A).

From the Yahoo Finance profile: PayPal Holdings, Inc.’s ISS Governance QualityScore as of May 1, 2017 is 4. The pillar scores are Audit: 2; Board: 8; Shareholder Rights: 3; Compensation: 5. Brought to us by Institutional Shareholder Services (ISS). Scores range from “1” (low governance risk) to “10” (higher governance risk). Each of the pillar scores for Audit, Board, Shareholder Rights and Compensation, are based on specific company disclosures. That gives us a quick idea of where to focus: the Board.

PayPal’s Summary Compensation Table shows the highest paid named executive officer (NEO) was CEO Daniel H. Schulman at $18.9M in 2016. I am using Yahoo! Finance to determine the market cap ($59.3B) and I am roughly defining large-cap as $10B, mid-cap as $2-10B, and small-cap as less than $2B. PayPal is a large-cap company. According to EY Center for Board Matters, the 3-yr average CEO compensation at large-cap corporations is $12.7M in 2016, so pay was well above that amount. PayPal shares outperformed the NASDAQ over the most recent two year time period but underperformed during the most recent one year time period.

I voted “AGAINST” the say-on-pay item. The “Lake Woebegone effect,” where everyone is above average and the averages are recalculated upward every year, has to stop. We cannot just keep voting in favor of higher and higher pay packages. I also voted against the Compensation Committee, since they recommended the plan: David W. Dorman (Chairman), Wences Casares, Jonathan Christodoro.

#4 I have no reason to believe the auditor has rendered an inaccurate opinion, is engaged in poor accounting practices, or has a conflict of interest. However, Egan-Jones recommends voting against, favoring auditor rotation after seven years. I am not quite ready to set that as the bar, so voted FOR.

Egan-Jones also recommended that clients vote against some directors. However, that endorsement was qualified with the following statement:

We recommend that clients WITHHOLD votes from the Company’s Chairman, Independent outside director John J. Donahoe and the Company’s CEO, Inside director Daniel H. Schulman, for holding more than one other public directorship. We believe that the Chairman, being responsible for the leadership of the Board and the creation of the conditions necessary for overall board and individual director effectiveness, and that the CEO, being the most critical role in a company, should hold no more than one other public directorship to ensure the valuable, effective, and prudent exercise of their fiduciary duties as Chairman and CEO and that their integrity and efficiency are not compromised.

Egan-Jones “determined that the proposed resolution contemplated thereby is advisable, substantively and procedurally fair to, and in the best interests of Company and its shareholders. We recommend a vote FOR this Proposal.” Frankly, I didn’t independently analyze this item. Since Egan-Jones recommended and Calvert, CBIS and Trillium voted FOR, I joined in – trusting their analysis.

James McRitchie (that’s me) is the proponent. I voted ‘FOR.’ A growing number of firms (30% of the S&P 500) allow shareholders to act by written consent. Such rights are important, in cases of emergency where even a special meeting would take too long.

#6 Report on Sustainability and #7 Report on Feasibility of Net-Zero GHG Emissions. These proposals are warranted since they address issues of not only social responsibility but significant risk. PayPal does not currently disclose its greenhouse gas (GHG) emissions reduction goals, its environmental policies or its environmental oversight mechanisms.

PayPal: Votes Against Board Position in Bold

As mentioned above, ProxyDemocracy.org had collected the votes of three funds when I voted.  Proxy Insight reported additional votes from the Local Government Supernnuation Scheme. They voted against Donahue and Schulman.