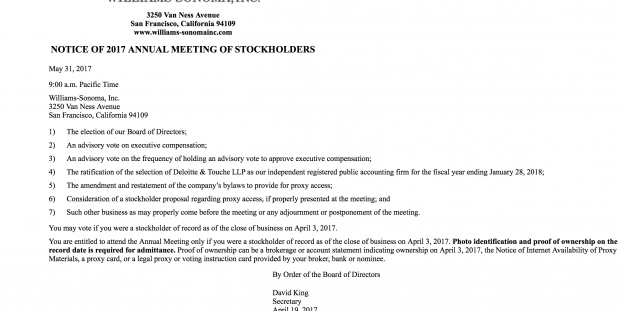 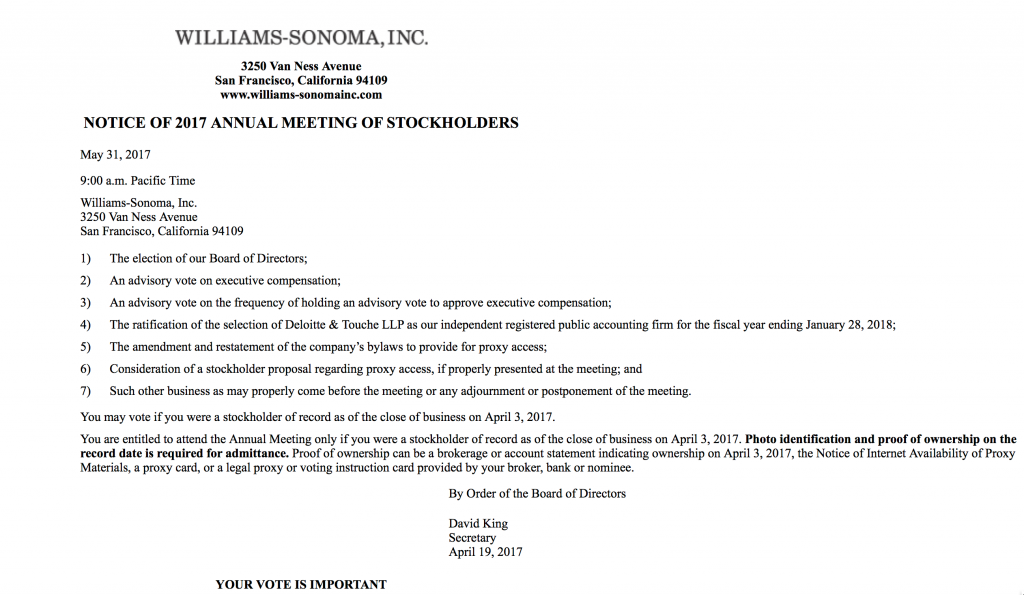 Williams-Sonoma Proxy Voting Guide by CorpGov.net. Williams-Sonoma, Inc. (WSM) operates as a multi-channel specialty retailer of various products for home.  Williams-Sonoma  is one of the stocks in my portfolio. ProxyDemocracy.org had collected the votes of one fund family when I checked and voted. Their annual meeting is coming up on May 31, 2017.

I voted AGAINST #5 lite proxy access, FOR #6 real proxy access, proposed by me. See how and why I voted other items below. I voted with the Board’s recommendations 57% of the time. View proxy via SEC’s EDGAR system (look for DEF 14A).

Williams-Sonoma, Inc.’s Summary Compensation Table shows the highest paid named executive officer (NEO) was CEO Laura J. Alber at $13.8M in 2016. I am using Yahoo! Finance to determine the market cap ($4.3B) and I am roughly defining large-cap as $10B, mid-cap as $2-10B, and small-cap as less than $2B. Williams-Sonoma is a mid-cap company. According to EY Center for Board Matters, the 3-yr average CEO compensation at mid-cap corporations is $6.2M in 2016, so pay was well above that amount. Williams-Sonoma shares underperformed the S&P 500 over the most recent one, two, five and ten year time periods.

We recommend that clients WITHHOLD votes from the members of the Compensation Committee, namely Affiliated outside directors Adrian D.P. Bellamy and Anthony A. Greener, and Independent outside director Rose Marie Bravo. Egan-Jones believes that the Compensation Committee should be held accountable for such a poor rating and should ensure that the Company’s compensation policies and procedures are centered on a competitive pay-for-performance culture, strongly aligned with the long-term interest of its shareholders and necessary to attract and retain experienced, highly qualified executives critical to the Company’s long-term success and the enhancement of shareholder value.

I agreed and voted “AGAINST” the say-on-pay item. I also voted against the Compensation Committee.

I have no reason to believe the auditor has rendered an inaccurate opinion, is engaged in poor accounting practices, or has a conflict of interest. However, Egan-Jones recommends voting against, favoring auditor rotation after seven years. I am not quite ready to set that as the bar, so voted FOR but 37 years with the same auditor is outrageously long.

We recommend that clients WITHHOLD votes from Affiliated outside directors Adrian D.P. Bellamy and Anthony A. Greener, current members of the Compensation and Nominations and Corporate Governance Committees of the Board. We believe that key Board committees namely Audit, Compensation, and Nominating Committees should be comprised solely of Independent outside directors for sound corporate governance practice.

That seems like excellent advice to me, although they were also on the Compensation Committee, so already covered above.

#5 Provide Proxy Access Right is management’s proposal. The primary difference between management’s proposal and my proposal (#6, Adopt Proxy Access Right) is that management’s proposal limits nominating groups to 20, instead of allowing groups of up to 50. The Council of Institutional Investors, whose members have over $3T in assets, says its members cannot meet the 3 year/3% threshold with a 20 members group. Since their members are mostly indexed, it may take 30 to 50 members to get there. Of course, retail investors may also need up to 50 to implement proxy access. Most of the real problems in corporate governance are at small-cap companies, where few institutional investors have positions.

Secondly, their proposal only provides up to 20% of the board, or 2 whichever is greater. My proposal allows shareholders to nominate up 25% of the board, or 2 whichever is greater. That makes no difference right now, but could if the board expands. Williams-Sonoma sets out a table in their opposition statement that pro ports to show other differences… Would not prohibit… No requirement, etc. These are non-issues. Since our shareholder proposal is limited to 500 words, we cannot cover any issue. Management is free to adopt any language they would like to address those issues.

I am voting AGAINST #5 and FOR #6 because a higher vote for #6 will demonstrate that is what shareholders prefer. Many funds, like Calvert and CalSTRS will vote for both proposals to ensure at least one passes and is adopted. No one is invoking proxy access at this time, so it is more important to get it right that just to have a weak unusable rule. Additionally, many large mainstream funds routinely vote with management. We will need a lot of independent thinkers to vote FOR #6 to offset such drone votes.

Williams-Sonoma: Votes Against Board Position in Bold

As mentioned above, ProxyDemocracy.org had collected the votes of only one fund when I voted.  Proxy Insight will soon report CalSTRS and other additional votes.

Under Rule 14a-8 of the Securities Exchange Act of 1934, as amended, if the date of the 2018 Annual Meeting changes by more than 30 days from the anniversary of this year’s Annual Meeting, to be included in our Proxy Statement, stockholder proposals must be received by us within a reasonable time before our solicitation is made.