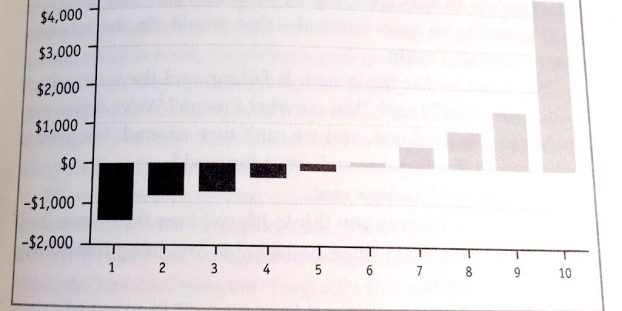 Peter Georgescu’s Capitalists Arise!: End Economic Inequality, Grow the Middle Class, Heal the Nation correctly identifies short-termism and a focus on stock price as a problem contributing to growing wealth inequality. His solutions depend on enlightened managers and boards to transform how America does business by taking all stakeholders into account, not just shareholders. I say, don’t count on enlightened self-interest by those now in control. They are unlikely to overturn the system that benefits them.

Transformation is not likely to come from those in power, even if it would be to the advantage of all. Transformation must be demanded from below. Any transformation system that purports to consider all stakeholders must effectively redistribute power. We cannot depend on benevolent dictatorships like Facebook’s Mark Zuckerberg or Alphabet’s Sergey Brin and Larry Page to act as if all stakeholders matter. To get where Georgescu correctly wants to go, there must be a real shift in power. 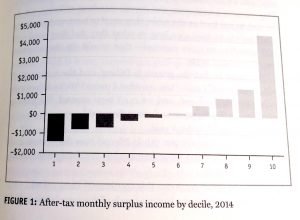 The main strengths of the book are an easy to read folksy narrative and its correct identification of inequality as the main danger facing capitalism. Liberal use of graphs also helps. For example, as can be seen in Figure 1, nearly 60% of Americans add thousands of dollars to their debt load every year. The house of cards will collapse.

Unemployment statistics do not include discouraged workers, a much larger proportion of the population than those seeking work. A third of the employable population is out of work.

America’s Gini coefficient (inequality gap) is higher than any other developed company. 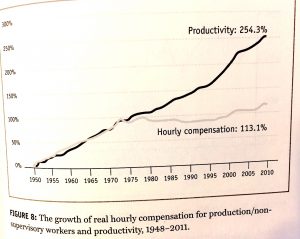 Corporations make money for shareholders but that isn’t working for society. Despite increases in productivity, median households income is less than 1% higher than it was in 1989.

The 1% lives 15 years longer than the bottom. American’s cannot afford to buy what we make. Those who run our corporations need to balance the needs of all stakeholders – employees, customers and communities. The world has changed from one of excess consumer demand to one of excess supply of products and services. The two need to more in balance. Innovation, not capital, is the driver of wealth. Innovation comes from your employees. Unless you pay them first, shareholders will also lose in the long-run.

To bolster his argument, Georgescu cites evidence that enlightened companies are even more profitable. Johnson and Johnson pulled possibly contaminated Tylenol off the shelf because it was the right thing to do for their customers. That was a short-term loss but drove long-term gains because it enhanced their reputation. He also cites Alphabet, Adobe, Autodesk, Home Depot, Costco, Publix, Qualcomm, Unilever, The Container Store, Starbucks, Wegmans and Gravity Payments, among others.

Georgescu recognizes, “creative insight rarely flows down from the office of the CEO. It rises up from the factory floor, the cubicle warren, and the street.” Yet, his solutions appear to flow top down, focused on CEOs and directors. They should start the following:

Free-market capitalism has been hijacked to serve only the few, not the many. “If business chooses to isolate itself from the needs and obligations of society, government must and will step in. That’s the European model.” Government dictates the obligations businesses must meet.

Georgescu pleas that CEOs must step up, supported by their boards and long-term shareholders. Don’t count on that happening. Georgescu acknowledges US prominence after WWII was helped by the elimination of competition, strong unions, and a responsibility to society and our national interests. He could have been further emphasized that many industries had been essentially redirected by the government to meet the war effort. CEOs and boards felt an obligation to stakeholders, in large part,  because stakeholders were powerful. They had to pay attention to them.

Now, the main power left standing is that of shareholders. Georgescu’s ideal companies run the gamut, from Alphabet, a benevolent dictatorship, to Publix, which is private and employee owned. Yes, companies should serve all their stakeholders but wouldn’t that be more likely if stakeholders had real power through seats on the board? 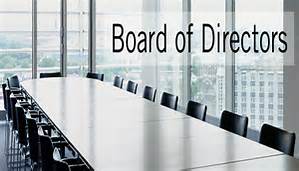 For example, companies could not only have an ESOP but could have one with pass through voting rights tied to electing a seat or two on the board. Or, they could have common shares through an ESOP that appreciate but each employee could also have a preferred share, entitling them to elect a board member or two.

Similarly, a Costco membership or Amazon.com Prime membership could come with a preferred share that expires if membership expires). Members/preferred shareholders could be entitled to elect a director or two on the board.

Yes, these may be unrefined thoughts, but the idea is to formalize the stakeholder relationship through some form of share ownership and board representation. I have long rejected most forms of stakeholder theory because it simply provides discretion to management to play off one stakeholder against the other. Shareholders have legal rights to hold boards accountable through elections and other mechanisms. Stakeholders do not.v 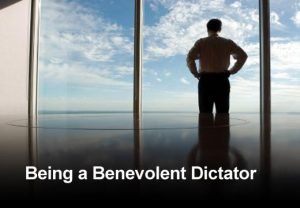 Georgescu’s ideas rely primarily on example and whim. Brin Sergey and Larry Page, who have adopted some of Georgescu’s recommendations, can change the culture of Google overnight by turning employees into the equivalent of serfs. That cannot be done at Publix, since it is owned and operated by its employees.

Shouldn’t we try to build in stakeholders though common or preferred shares and formal representation? Transformations of that type are much more likely to survive the changing whims of CEOs, boards and shareholders.

Despite my frustrations with the book, reading it was a couple of hours well spent. Also well worth the time was a recent Webinar. The Conference Board‘s Douglas Chia did an excellent job interviewing Mr. Georgescu. Watch the replay if you can. (You may have had to register for the program to get the link.)