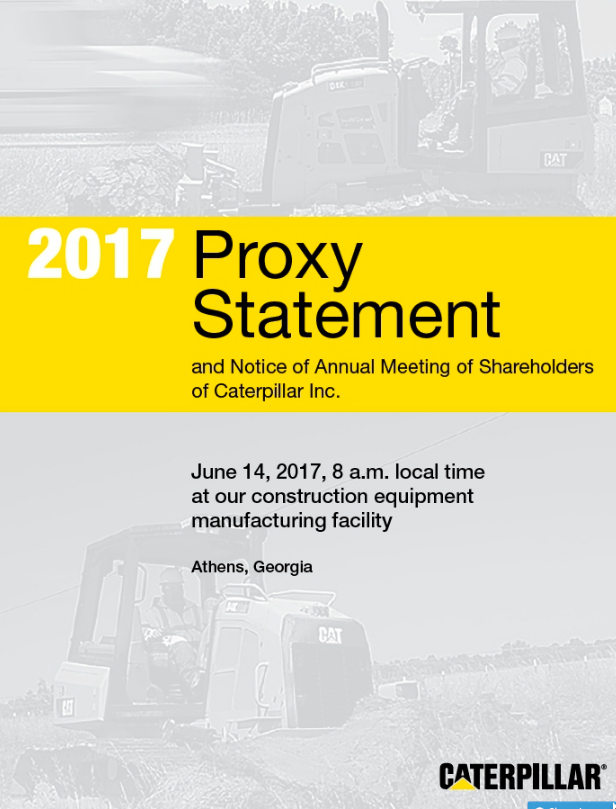 Sorry, this Caterpillar Inc Proxy Voting Guide comes late, since tomorrow is the last day to vote unless you attend the annual meeting. Caterpillar Inc. (CAT) manufactures and sells construction and mining equipment, diesel and natural gas engines, industrial gas turbines, and diesel-electric locomotives for heavy and general construction, rental, quarry, aggregate, mining, waste, material handling, oil and gas, power generation, marine, rail, and industrial markets. Caterpillar is one of the stocks in my portfolio. ProxyDemocracy.org had collected the votes of two fund families when I checked and voted on the last day. Their annual meeting is coming up on June 14, 2017.

I voted FOR our proposal to reduce the threshold required to hold a special meeting. See how and why I voted other items below. I voted with the Board’s recommendations 70% of the time. View Proxy Statement via SEC’s EDGAR system (look for DEF 14A).

Caterpillar Inc’s Summary Compensation Table shows the highest paid named executive officer (NEO) was Chairman and CEO Douglas R. Oberhelman at $15.5M in 2016. I am using Yahoo! Finance to determine the market cap ($62.5B) and I am roughly defining large-cap as $10B, mid-cap as $2-10B, and small-cap as less than $2B. Caterpillar Inc is a large-cap company. According to EY Center for Board Matters, the 3-yr average CEO compensation at large-cap corporations is $12.7M, so pay was above that amount. Caterpillar Inc shares outperformed the NASDAQ over the most recent one, two and ten year time periods, but underperformed in the most recent five year time period.

I voted “FOR” the say-on-pay item, considering Caterpillar Inc the above advice, performance and that it is larger than may large-caps.

As mentioned above, I voted “FOR” the pay package and auditors.

With respect to Directors, Egan-Jones recommended that clients

WITHHOLD votes from the Company’s Chairman, Independent outside director David L. Calhoun, for holding more than one other public directorship. We believe that the Chairman, being responsible for the leadership of the Board and the creation of the conditions necessary for overall board and individual director effectiveness, should hold no more than one other public directorship to ensure the valuable and prudent exercise of his fiduciary duties as a Chairman and that his integrity and efficiency are not compromised.

I am not quite ready to go there on the CEO, although I strongly supporting splitting chair and CEO positions. Maybe I will join next year. I took their recommendation to reinforce committee independence and voted against Gallardo and Rust.

Egan-Jones also recommended in FOR amending #5 Amend Omnibus Stock Plan. I went along with their advice.

A right of 15% seems a reasonable compromise above the minimum 10% threshold allowed by Delaware. As last reported, SSgA held 9% and Vanguard held 6.5% of Caterpillar Inc. Neither are activist funds so will not be calling a special meeting unless Caterpillar Inc craters.

Vote FOR proposal #7 to allow the right of 15% of shares to call a special meeting.

This is a proposal on disclosing of lobbying priorities from the right-wing the National Center for Public Policy Research’s Free Enterprise Project. “After eight years of President Obama’s regulatory overreach, high corporate taxation and executive actions that hampered growth and led to America’s worst economic recovery since the 1930s, we finally have a president willing to work with business leaders on a pro-growth agenda. President Trump is showing an eagerness to increase American manufacturing and bring jobs back to America,” said National Center General Counsel and FEP Director Justin Danhof, Esq.

#9 Include Sustainability as a Performance Measure for Senior Executive Compensation

Executive pay should be linked to sustainability. Vote FOR #9.

Caterpillar Inc’s current clawback policy does not provide for the disclosure of the amounts and circumstances surrounding any recoupments. Such disclosure would benefit shareholders. Vote FOR #10.

A vote FOR this proposal by John Chevedden is warranted given the importance of having an independent chairman of the board.

As mentioned above, ProxyDemocracy.org had collected the votes of two funds when I voted. Proxy Insight reported additional votes from Teacher Retirement System of Texas (TRS) and Calvert. They were split on #5. All voted AGAINST #8 and voted FOR all other shareholder proposals.

A proposal for action or the nomination of a director to be presented by any shareholder at the 2018 annual meeting of shareholders will be acted on only: