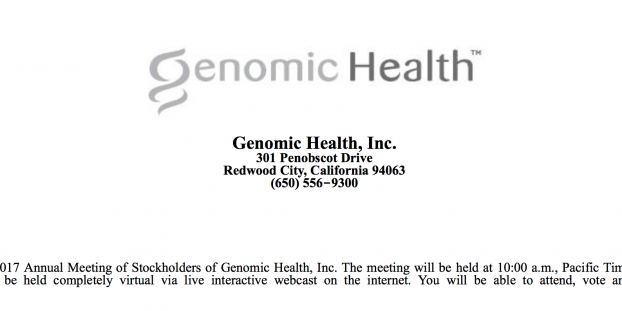 Genomic Health Proxy Voting Guide by CorpGov.net. Genomic Health (GHDX), a healthcare company, provides actionable genomic information to personalize cancer treatment decisions in the United States and internationally. It develops and commercializes genomic-based clinical laboratory services that analyze the underlying biology of cancer, allowing physicians and patients to make individualized treatment decisions.  Genomic Health is one of the stocks in my portfolio. ProxyDemocracy.org had collected the votes of no fund family when I checked and voted. Their annual meeting is coming up on June 15, 2017.

I voted FOR #5 proxy access, proposed by me. See how and why I voted this and other items below. I voted with the Board’s recommendations 62% of the time. View proxy via SEC’s EDGAR system (look for DEF 14A).

Genomic Health’s Summary Compensation Table (p. 18) shows the highest paid named executive officer (NEO) was CEO Kimberly J. Popovits at $2.3M in 2016. I am using Yahoo! Finance to determine the market cap ($1.1B) and I am roughly defining large-cap as $10B, mid-cap as $2-10B, and small-cap as less than $2B. Genomic Health is a small-cap company. According to EY Center for Board Matters, the 3-yr average CEO compensation at small-cap corporations is $3.85M in 2016, so pay was well below that amount. Genomic Health’s’ shares underperformed the S&P 500 over the most recent one, two, five and ten year time periods, outperforming only over ten years. Is it worth keeping?

I agreed, but barely, and voted “For” the say-on-pay item.

I have no reason to believe the auditor has rendered an inaccurate opinion, is engaged in poor accounting practices, or has a conflict of interest. Egan-Jones notes Ernst & Young, LLP has been serving as the Company’s auditor for more than seven years. Agreed, that is problematic but I’m not ready to vote against them on that basis. Maybe I will change my mind next year. I voted FOR.

Board Elections: Egan-Jones recommended as follows:

Inside director Kimberly J. Popovits is a current Chairman of the Board and CEO of the Company, and combined with the Board Rating of Some Concerns the Company has received, we recommend that clients WITHHOLD votes from this nominee. We believe that there is an inherent potential conflict, in having the CEO or former CEO serve as the Chairman of the Board. Consequently, we prefer that companies focus on the following areas to improve its corporate governance practices: separate the roles of the Chairman and CEO, hold annual director elections, have one class of voting stock only, have key board committees consisting of independent directors and majority of independent directors on board and include non-binding compensation vote on agenda to further ensure board independence and accountability.

I’m not quite ready to go there on the Chairman but did vote against J. Baker and Cohen. 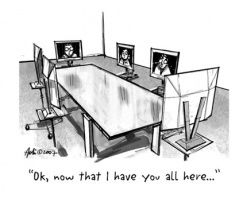 Additionally, I have decided to also WITHHOLD my vote from all the members of the Nominating and Governance Committee for their presumed recommendation to the full board to hold a virtual-only shareholders meeting. Virtual-only meetings are easily programmed by the current board to avoid difficult questions. Shareholders lack an opportunity to meet with directors, staff and each other. Such meetings make a mockery of one of the most important mechanisms available and will lead to corporations as democratic-free zones. Vote AGAINST Henry J. Fuchs, M.D. (Chair), Felix J. Baker, Ph.D. and Fred E. Cohen, M.D., D.Phil.

Taking into account the maximum amount of effective dilution this proposal could cause, as well as both the quantitative and qualitative measures outlined below, we believe that shareholders should support the passage of this plan as proposed by the board of directors. Furthermore, we believe that the Company’s compensation policies and procedures are centered on a competitive pay-for-performance culture, strongly aligned with the long-term interest of its shareholders and necessary to attract and retain experienced, highly qualified executives critical to the Company’s long-term success and the enhancement of shareholder value. Therefore, we recommend a vote FOR this Proposal.

I see that both Calvert and TRS voted AGAINST, so I did as well.

I agreed and voted For.

#5, Amend Proxy Access Right (McRitchie) Proxy access should be viewed as a fundamental right to ensure shareholders can hold directors accountable. Yes, in uncontested elections we can vote against directors and Genomic Health requires a majority vote to win. However, losing candidates can be replaced by board nominated candidates who may be no better. Proxy access would allow shareholders to place up to 25% of the board or two, whichever is more, nominees on the proxy.  We do not need independent directors as much as directors who know they are dependent on shareholders — their vote and sometimes even their nomination.

Egan-Jones notes, “we believe that shareholders should have the right to nominate their own representatives according to the shareholders’ criteria proposed in this proposal. As such, we recommend a vote FOR this Proposal.”

The vast majority of large-cap companies offer proxy access, most mid-caps will soon follow. The Board argues, proxy access “creates a risk that any such candidates have not first been thoroughly evaluated for their suitability, experience and perspective to serve on the board.” Of course, nominating candidates is not the same as electing them. Under proxy access, the Board will have ample opportunity to argue their candidates are more qualified. While proxy access candidates would be limited to a 500 word statement in the proxy, no such limitation would apply to Board nominees. While proxy access may take more time to come to small-caps, such as Genomic Health, eventual adoption is almost inevitable.

Please vote FOR proposal #5 to give shareholders a right to proxy access.

Genomic Health: Votes Against Board Position in Bold

As mentioned above, ProxyDemocracy.org had not collected any advance votes.  Proxy Insight reported those of Calvert and Teachers Retirement of System of Texas (TRS). Calvert voted against all the directors. TRS voted against Cohen. Both voted against #3, the stock plan, and FOR #7 proxy access.

If a stockholder wishes to present a proposal to be considered for inclusion in our proxy statement for the 2018 Annual Meeting of Stockholders, the proponent and the proposal must comply with the proxy proposal submission rules of the SEC. One of the requirements is that the proposal be received by Genomic Health’s Secretary no later than December 31, 2017. Proposals we receive after that date will not be included in the proxy statement. We urge stockholders to submit proposals by Certified Mail—Return Receipt Requested.