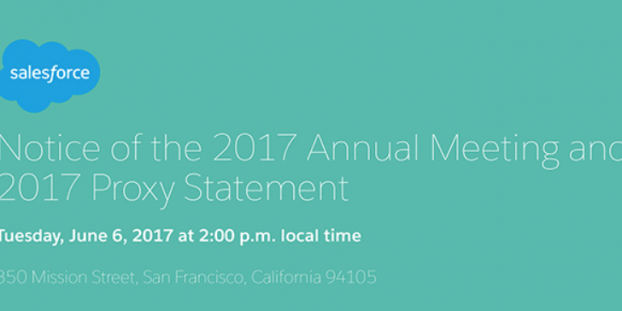 Salesforce.com, inc. develops enterprise cloud computing solutions with a focus on customer relationship management.  Salesforce.com, inc. (CRM) is one of the stocks in my portfolio. ProxyDemocracy.org had collected the votes of three fund families when I checked and voted. Their annual meeting is coming up on June 6, 2017

I voted FOR #7 the ability of shareholders to call a special meeting. See how and why I voted other items below. I voted with the Board’s recommendations 59% of the time. View Proxy Statement via SEC’s EDGAR system (look for DEF 14A).

Salesforce.com’s Summary Compensation Table shows the highest paid named executive officer (NEO) was Chairman and CEO Marc Benioff at $13.2M in 2016. I am using Yahoo! Finance to determine the market cap ($64.6B) and I am roughly defining large-cap as $10B, mid-cap as $2-10B, and small-cap as less than $2B. Salesforce.com is a large-cap company. According to EY Center for Board Matters, the 3-yr average CEO compensation at large-cap corporations is $12.7M, so pay was just below that amount. Salesforce.com’s shares outperformed the NS&p 500 over the most recent two, five, and ten year time periods, but underperformed in the most recent one year time period.

we believe that shareholders should support the current compensation policies put in place by the Company’s directors. Furthermore, we believe that the Company’s compensation policies and procedures are centered on a competitive pay-for-performance culture, strongly aligned with the long-term interest of its shareholders and necessary to attract and retain experienced, highly qualified executives critical to the Company’s long-term success and the enhancement of shareholder value. Therefore, we recommend a vote FOR this Proposal.

I have no reason to believe the auditor has rendered an inaccurate opinion, is engaged in poor accounting practices, or has a conflict of interest. However, Egan-Jones recommends voting against, favoring auditor rotation after seven years. I am not quite ready to set that as the bar, so voted FOR Ernst & Young, LLP.

With respect to Directors, Egan-Jones’ advice included the following:

Inside director Marc Benioff is a current Chairman of the Board and CEO of the Company, and combined with the Board Rating of Some Concerns the Company has received, we recommend that clients WITHHOLD votes from this nominee. We believe that there is an inherent potential conflict, in having the CEO or former CEO serve as the Chairman of the Board. Consequently, we prefer that companies focus on the following areas to improve its corporate governance practices: separate the roles of the Chairman and CEO, hold annual director elections, have one class of voting stock only, have key board committees consisting of independent directors and majority of independent directors on board and include non-binding compensation vote on agenda to further ensure board independence and accountability.

Moreover, as the Company’s Amended and Restated 2013 Equity Incentive Plan earns an AGAINST recommendation due to its dilutive effect to the interests of the shareholders, we recommend that clients WITHHOLD votes from the members of the Compensation Committee, namely Independent outside director John V. Roos and Affiliated outside directors Craig Conway and Maynard Webb. Egan-Jones believes that the Compensation Committee should be held accountable for such disapproval and that the board as a whole should seek to align CEO and employee pay more clearly as well as link that pay with the performance of the company, and work to reduce the potential cost of any similar plan that may be proposed in the future.

I agree on all these but am not quite ready to automatically vote against all combined CEO/Chairs… maybe next year.  I also agree, proposal #2, Amend Omnibus Stock Plan, is too dilutive and is not adequately tied to performance, so voted AGAINST.

I agree and voted FOR.

Egan-Jones writes: “We do not believe it is appropriate to enable holders of below 25% of the common stock to have an unlimited ability to call special meetings for any purpose at any time. As such, we recommend a vote AGAINST this Proposal. Delaware law allows a 10% threshold to call a special meeting. My proposal for 15% seems a reasonable compromise.

Salesforce.com Proxy Voting Guide: Votes Against Board Position in Bold

As mentioned above, ProxyDemocracy.org had collected the votes of three funds when I voted.  Proxy Insight reported additional votes from three additional funds. All voted FOR #7 to allow shareholders to call a special meeting.

Any stockholder proposal submitted for inclusion in the Company’s proxy statement for the 2018 Annual Meeting of Stockholders pursuant to Rule 14a-8 of the Exchange Act should be addressed to the Secretary of the Company at the address set forth above and must be received at our principal executive offices not later than December 27, 2017. In the event the date of the annual meeting is moved by more than 30 days from the one-year anniversary of the date of the 2017 Annual Meeting, then notice must be received within a reasonable time before the Company begins to make its proxy materials available. Upon such an occurrence, the Company will publicly announce the deadline for submitting a proposal by means of disclosure in a press release or in a document filed with the SEC.