The Interfaith Center on Corporate Responsibility, a coalition of institutional investors representing $200 billion in invested capital that engage corporations on the environmental and social impacts of their operations, sent a letter yesterday to all U.S. Senators urging them not to pass the Financial CHOICE Act.

The proposed legislation, which passed the House and is currently pending in the Senate, would not only eviscerate critical financial reforms instituted in response to the 2008 financial crash, but would also eliminate the long-standing right of shareholders to exercise their voice regarding the governance of the companies they own.

The CHOICE Act is dangerous on multiple levels and it is crucial that the Senate reject it. From the perspective of financial reform, this bill would roll back Dodd Frank rules that are creating a fairer and more transparent financial services marketplace and reducing the excessive risk-taking by banks that was responsible for the 2008 meltdown. From the perspective of shareholder democracy, the CHOICE Act is a brazen attempt to eliminate shareholders’ ability to file proxy resolutions – a highly effective corporate accountability tool that has been beneficial to companies and has produced meaningful change on important environmental, social and governance issues.

The letter was signed by 166 institutional investor members of the Interfaith Center on Corporate Responsibility that engage in dialogue with the corporate management of the companies that they hold shares in to improve corporate performance on issues impacting communities around the world, including climate change, corporate water stewardship, human rights and health care.

Shareholder resolutions are used to heighten awareness of an issue with board and management, as well as with other shareholders who can vote on them at annual meetings. While purely advisory in nature, when these resolutions achieve significant support they often lead to positive changes in corporate practices that benefit all stakeholders and improve the company’s bottom line.  The letter cites examples where shareholder resolutions have resulted in meaningful corporate commitments and improved environmental and social performance, which include:

It is also important to underscore that quite often resolutions are withdrawn by their proponent after prompting a productive dialogue and improved understanding between shareholders and companies, leading to significant policy changes that can transform businesses. Even resolutions that get low votes often result in further dialogue and substantive progress on the issues.

The CHOICE Act proposes drastic changes to the proxy process, including setting the ownership thresholds so high that it would eliminate virtually all shareholder proposals.  This would effectively silence investors’ ability to raise environmental, social, and governance concerns with the board, management and other shareholders.

Interfaith Center on Corporate Responsibility members believe the CHOICE Act would be bad for companies, their investors, the broader economy and society at large, and will continue to advocate against its passage by the Senate.

About the Interfaith Center on Corporate Responsibility 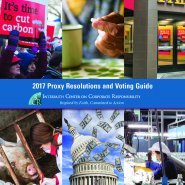 Celebrating its 46th year, the Interfaith Center on Corporate Responsibility is the pioneer coalition of shareholder advocates who view the management of their investments as a catalyst for social change. Its 300 member organizations comprise faith communities, socially responsible asset managers, unions, pensions, NGOs and other socially responsible investors with combined assets of over $200 billion. Interfaith Center on Corporate Responsibility members engage hundreds of corporations annually in an effort to foster greater corporate accountability. More at the Center’s website.

Get the ICCR 2017 Proxy Voting Resolutions and Voting Guide.