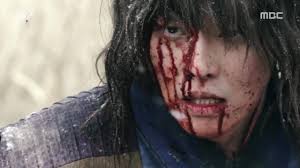 I’ll just quickly summarize her post, adding a little commentary, and will then report on a few additional observations from the battlefield. Excuse my blood, while I take the metaphor too far. (Okay, maybe I’ve been watching too many episodes of Rebel: Thief of the People on DramaFever but sometimes my fight to end what are essentially democracy-free zones in corporate governance feels a little like Gil-dong’s efforts to end tyranny in Korea’s Joseon dynasty.)

Chiu divides attempts at proxy access amendment proposals into three phases. In phase one of the proxy access battlefield, some of us sought multiple amendments to what I’ve been calling proxy access ‘lite.’ Lite bylaws give the appearance of providing access but cannot really be used without the unlikely participation of huge funds, such a Vanguard (who could do proxy access on their own), since “smaller” shareholders such as CalPERS cannot typically combine with similar funds to meet the group of 20 limitation. (see CII report) One of the primary provisions in phase one was that there be no numerical limits on the size of nominating groups.

Although companies were largely denied no-action requests in phase one, our proposals did not meet with success. Perhaps it takes a while convince huge index funds that they should not be the only ones with power? We also wanted to reach out to boards to let them know we were open to compromise, so in phase two of the proxy access battlefront we focused on allowing nominating groups to be limited to 40 or 50 shareholders. Companies were able to exclude such proposals on the basis that limiting groups to 50 members was not significantly different than limiting them to 20 members. At least, that’s my read of the tea leaves, for what it is worth.

In the third phase of the proxy access battlefront, we went back to request nominating groups of an unlimited number of shareholders. Staff rejected H&R Block’s request for no-action relief. I think I know why, but if I told you it might jeopardize college funds of the children of outside counsel, since companies might stop fighting such a reasonable request. I wonder how much HRB paid Stinson Leonard Street LLP for those 5 letters. How much did Broadridge save by agreeing to amend their bylaws?

What would you do? I’d love to get your comments below or by email. I was fairly confident before the Staff decision on HRB, so have filed for proxy access amendments with no limits on the number of shareholders in a nominating group. I trust support will grow as more shareholders realize no one is actually able to make use of proxy access lite bylaws.

The latest missive from the US Chamber of Commerce (Shareholder Proposal Reform) appears to blame the country’s low GDP growth on the “tax” imposed on public companies by shareholder proposals, such as those “sponsored by six individual investors.” 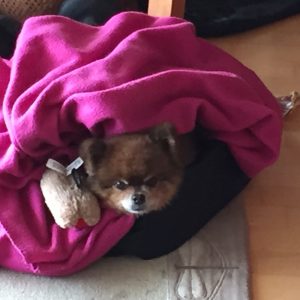 Canada is too cold; I want my blankie.

Of course, their arguments are not totally based on alternative facts. The IMF predicts Canada’s GDP will grow at 3.5% this year, whereas our projected growth has been downgraded to 2.1%. The slow-down is real.

However, even our little dog, who think’s Canada is too cold, probably recognizes that companies and employees in Canada do not have to worry about healthcare, daycare, university tuition, gun violence, obesity, the gap between rich and poor, lack of social mobility, high corporate taxes and so much more. [see 99 reasons why it’s better to be Canadian (I’m sure that number has increased since this report in 2013)] Those seem more important drivers than any “tax” imposed on public companies by a “small subset of activists” who “commandeer long-standing SEC rules for their own parochial purposes.”

I will try to write something more definitive about the Chamber’s Shareholder Proposal Reform next week but the heart of their argument seems to be that most shareholder proposals are a frivolous “tax” on companies and other shareholders. Proposals get few votes, yet companies are forced to spend a fortune (apparently enough to lower GDP) trying to keep them off the proxy.

Do you see the gapping hole in their logic? If most shareholder proposals are doomed to failure, why waste money trying to keep proposals used to “advance idiosyncratic agendas that come at the expense of other shareholders” off the proxy? No one is forcing companies to hire outside counsel requesting no-action letters based on technicalities.

Why not just argue the merits using an opposition statement in the proxy? If the agendas advanced really are idiosyncratic, shareholders will reject them. During the last five years, 132 of my proposals have been voted on. Most received substantial support in the 30-50% range. Well over 20% received a majority vote. See Exhibit 1 (download in Excel Exhibit1. You have to click again in the next window). Of course, many other proposals never get to the no-action stage or a proxy because boards adopt them without all the fuss. See WD-40 Win Win – Majority Vote Standard  and Broadridge Amends Proxy Access: Allows 50 for two cases so far this month.