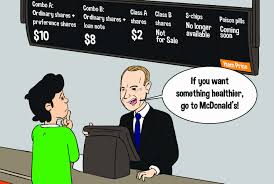 Multi-class share structures were banned by S&P from joining their most popular indexes. The move has been hailed by investors, myself included. Little noticed by the mainstream press, but discussed briefly by Davis, Polk & Wardell LLP is a provision allowing spin-offs from companies (like Alphabet) to be listed.

Importantly, a newly public company spun off from a current S&P Composite 1500 index constituent would not need to meet the criteria for new additions to the index, and so would effectively benefit from its parent’s grandfathering. S&P Dow Jones believes this helps the index meet the objective of minimizing turnover.

From the S&P U.S. Indices Methodology:

For companies that issue a second publicly traded share class to index share class holders, the newly issued share class line will be considered for inclusion if the event is mandatory and the market capitalization of the distributed class is not considered to be de minimis.

Due to turnover and liquidity concerns, S&P 100 & 500 constituent Berkshire Hathaway Inc. (NYSE:BRK.B) is an exception to this rule. S&P Dow Jones Indices will continue to consolidate the share count for this company under the B share class line.

Companies, such as Alphabet and Under Armour, have sometimes paid a mandatory stock dividend in the form of a non-voting share class line, to current shareholders. In such cases, it appears new share lines could be added to S&P 500 and other indexes.

The new policy says, “Non-S&P Composite 1500 companies with multiple share class structures that acquire S&P Composite 1500 constituents are not eligible for S&P Dow Jones Indices.” What about the reverse? Could we see grandfathered multi-class share companies like Alphabet and Facebook getting into a new businesses through something like inversions, where they absorb other companies, disenfranchising shareowners?

Call me paranoid but some companies will take advantage of any possible loophole. For example, when Staff Legal Bulletin No. 14H (CF) was issued, I warned that it provides some wiggle room for companies to game the system by proposing the opposite of whatever a shareholder proposes. For example, if a shareholder proposes proxy access a company could invoke (i)(9) by countering with a proposal to deny any form of proxy access.

I wrote at the time that such a tactic could backfire. Whole Foods became something of a pariah when they put up a counter proxy access proposal to mine with thresholds that could never be met. Taking a “do the opposite” stand might be funny in comedy but not when carrying out the fiduciary duties of a board. However, that did not stop Illumina, Inc. I proposed the Board do away with supermajority requirements. That prompted the Board to do the opposite:

The Company Proposal seeks seeks stockholder ratification of the retention of certain provisions of the Company’s Certificate of Incorporation and Bylaws that require a vote of 66 2/3% of the Company’s outstanding stock in order to take certain actions.

SEC staff granted the no-action request. It is certainly an abuse of what (i)(9) was originally intended to do. As I noted in my appeal to the full Commission on 12/23/2014, the original rule

made clear that subsection (i)(9) could not be used as a tactical weapon in order to exclude shareholder proposals. To the extent company proposals were developed “in response to” a proposal submitted by shareholders, the subsection was unavailable. Finally, the staff only allowed for the exclusion of proposals that raised actual and immediate concerns. The proposals at issue in General Electric and Northern States were both mandatory and not precatory and, as a result, they raised clear and unavoidable issues with respect to implementation. [See Cypress Semiconductor Corporation (March 11, 1998) (“The Division is unable to concur in your view that the proposal may be excluded under rule 14a-8(c)(9). Among other factors that the staff considered in reaching this result, the staff notes that it appears that the Company prepared its proposal on the same subject matter significant part in response to the Mercy Health Services proposal.”); see also Genzyme Corporation (March 20, 2007) (“We are unable to concur in your view that Genzyme may exclude the proposal under rule 14a-8(i)(9). Among other factors that we considered in reaching this result, we note your representation that you decided to submit the company proposal on the same subject matter to shareholders, in part, in response to your receipt of the AFL-CIO Reserve Fund proposal.”).]

The change to the S&P 1500 Composite—which applies to all “multiple share class structures”—is far more sweeping and at a minimum will exclude any company with differential common-share classes, without regard to the voting power held by the public. This change not only precludes index eligibility for many newly public companies that are controlled using a dual-class structure, but also may impact newly public companies with “Up-C” structures, even when there is no differential voting, because public holders have a class of stock with economic and voting rights, while pre-IPO holders have a separate class of stock with just voting rights as they hold their economics in a separate subsidiary. At the moment it is not clear how S&P Dow Jones will interpret the phrase “multiple share class structures,” perhaps creating uncertainty for companies with tracking or other preferred shares outstanding.

On the other end of the spectrum, I am concerned the multi-class share ban may prohibit innovative share classes designed to increase more representative democracy on corporate boards. For example, this year McDonald’s shareholders vote on a proposal to give franchisees a seat on its corporate board of directors at their annual meeting. The proposal would have granted each franchisee a preferred share, entitled to vote on a board member elected only by franchisees. The proposal failed to get even 3% of the vote but I thought it was an interesting way to give voice on the board to a key constituency group. (Board Seats for Franchisees: Democratic Paradigm)