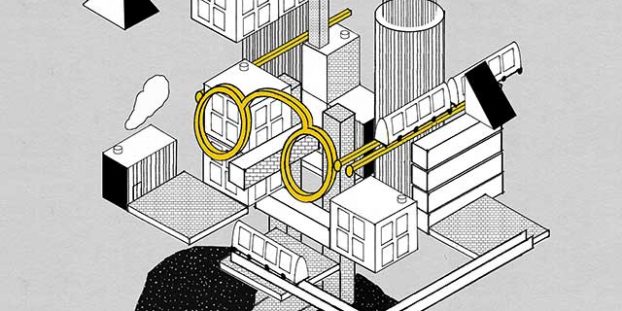 A shareholder society appears to have no place in the U.S. Chamber of Commerce Center for Capital Markets Competitiveness (CCMC) severely flawed paper on shareholder proposal reform. The paper is intended to contain a “set of recommendations for the SEC on fixing the broken Rule 14a-8 system in order to protect investors and make the public company model more attractive.”

However, the report attempts to solve our economic woes by eliminating shareholder rights. I criticized their report in my post Shareholder Proposal Reform Rebutted. Instead of seeking to amend Rule 14a-8 to create an essentially democratic-free zone for entrenched managers and boards, the Chamber should focus on creating a prosperous shareholder society where all Americans have a stake in our future.

The latest missive from the US Chamber of Commerce (Shareholder Proposal Reform) appears to blame the country’s low GDP growth on the “tax” imposed on public companies by shareholder proposals, such as those “sponsored by six individual investors,” including this shareholder advocate and his wife. In my prior post (and in that of Adam Kanzer), we saw that Rule 14a-8 proposals cost companies practically nothing. In fact, if used as an early warning system for issues such as the subprime mortgage crisis and climate change, heeding shareholder proposals could have saved companies billions of dollars.

There is a gaping hole in the Chamber’s logic. If most shareholder proposals are doomed to failure (as they argue), why do their member companies waste money trying to keep these proposals used to “advance idiosyncratic agendas that come at the expense of other shareholders” off the proxy? No one is forcing companies to hire outside counsel requesting no-action letters based on legal technicalities. Why not just argue the merits of such “idiosyncratic” proposals using an opposition statement in the proxy? If the agendas advanced really are idiosyncratic, shareholders will reject them.

Of course, most of the proposals are not nearly as idiosyncratic as the Chamber would have readers believe. During the last five years, 132 of my proposals have been voted on. Most received substantial support in the 30-50% range. Well over 20% received a majority vote.

Additionally, the Chamber’s flawed cost analysis fails to take into account that many shareholder proposals never reach the ballot because progress is made and they are withdrawn. Let us examine just a few topics from this year. The New York City Comptroller filed 170 resolutions on proxy access only 30% came to a vote. A record 37 resolutions were filed to improve recruitment of women and minorities; 60% were withdrawn after progress was made. Similarly, half of the 2017 resolutions on workforce diversity were withdrawn after companies agreed to publicize their workforce diversity data. Every one of the proposals calling for nondiscrimination for sexual orientation and gender identity were withdrawn after companies offered such protections. Half the proposals filed on gender pay gaps were also withdrawn because of progress. [Alliance Advisor’s 2017 Proxy Season Review (Aug. 2017)] None of these or many other proposals are counted by the Chamber.

Of course, the Chamber’s arguments are not totally based on alternative facts. They are right, we should be concerned that since America is struggling to achieve “even 2% GDP growth, addressing the decline in public companies should be a top concern for policymakers.” However, our failure is not because of the “tax” companies face with proxy proposals or because “the SEC’s accredited investor rules that limit investment in private enterprises.” Our failure is that most Americans have nothing invested in equities. After working two jobs to pay for health insurance, daycare and college loans, they have nothing to invest in the stock market. America is practically the opposite of a shareholder society.

Most people think stock markets are only for the rich. They know companies and their lobbyists are powerful. They support candidates who promise to “drain the swamp” in Washington to limit such power. Since they have no say in how corporations are run, they think only government has the power to regulate corporations. Especially after losing a home to the financial crisis, many believe the more regulations, the better.

Even when they do hold equities, they usually do so not directly but through an indexed mutual fund or ETF. If they feel any loyalty to a company it is not as an investor or owner, but as a customer. The trouble with US markets is not that a few shareholders like me are concerned about how their portfolio companies are governed. It is just the opposite. Not enough Americans have any stake in the economy. Corporate executives used to acknowledge the value of attracting retail shareholders by running “shareholder mix campaigns,” although sometimes for the wrong reasons. See my review of Institutional Investors and Corporate Governance.

The IMF predicts Canada’s GDP will grow at 3.5% this year, Australia’s growth is pegged at 3%, whereas our projected growth has been downgraded to 2.1%. The slow-down is real. (Data and Charts) Do the Canadian or Australian economies outperform because shareholders have fewer rights in those countries? No! By most measures shareholders in those countries have more rights.

There are many reasons why one economy may outperform another. Most have little to do with shareholders or their proposals. For example, companies and employees in Canada and Australia worry less about healthcare, daycare, university tuition, gun violence, obesity, the gap between rich and poor, lack of social mobility, high corporate taxes and much more. [see 99 reasons why it’s better to be Canadian] Any of these might be more important drivers than any “tax” imposed on public companies by a “small subset of activists” who “commandeer long-standing SEC rules for their own parochial purposes.” 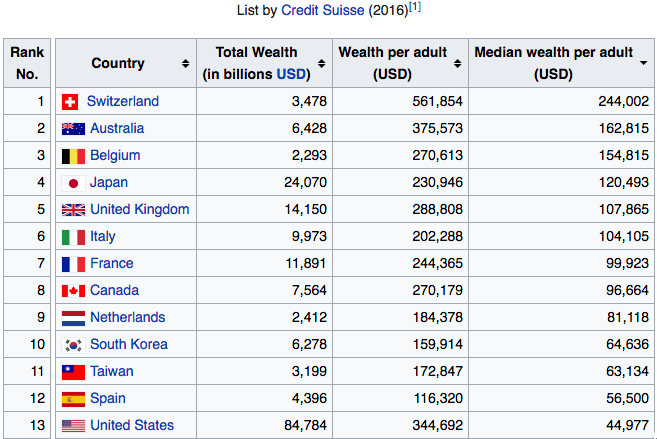 Americans like to think of ourselves as the richest country in the world. Yes, we have the highest total wealth. Even based on average wealth per adult, we rank third behind Switzerland and Australia. However, if we look at median wealth (what most adults have), we fall below Switzerland, Australia, Belgium, Japan, United Kingdom, Italy, France, Canada, the Netherlands, South Korea, Taiwan and Spain. Median wealth for an adult in Australia is $162,815 versus $44,977 in the United States.

One of the main problems with President George W. Bush’s proposal for an “Ownership Society” was that it called for decreasing Social Security. People do not like losing money or rights. The Australian system creates a prosperous “Shareholder Society” not by replacing part of their old age security benefits but by supplementing savings.

By deferring compensation (and consumption), Australian workers accumulate assets that weave more resiliency into the social safety net, rather than piling up unfunded liabilities which threaten to tear it down in the times of demographic or economic stress when they are needed most.

Australians have a real stake in Australian companies. As long-term owners, they have an incentive to ensure their companies are well-governed and sustainable. Additionally, since most Australians are monitoring their equity investments, there is less need for government regulation to ensure they are run in society’s best interest. In a shareholder society, the best interests of shareholders and society are closely aligned.

Australian shareholders have a two-strike rule, which allows just 25% of shareholders to vote down a company’s pay proposal and ultimately throw out the board. It only takes 5% of shareholders to call a special meeting. “Australia has the fourth largest pension savings pool in the world, at approximately A$2 trillion, with a forecast to be circa A$6 trillion by 2035.” (Shareholder activism in Australia)

The Chamber should look at how to “make American great again” by making us a little more like Australia. Their shareholder society – which also offers better healthcare, better opportunities for higher education and much more – has helped create a society where the average citizen feels like a participant in their own destiny, rather than a bystander. Unfortunately, the Chamber’s latest missive favors the role of bystanders for shareholders, instead of empowerment in a shareholder society. I would be happy to work with members of the Chamber to transform their vision. Contact me.