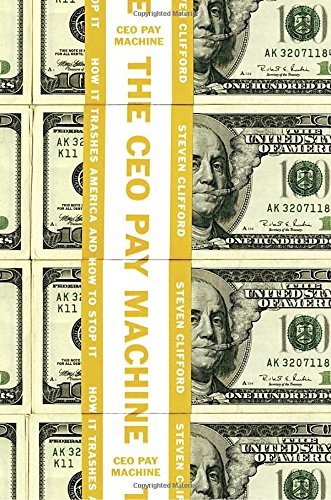 The CEO Pay Machine: How it Trashes America and How to Stop it (Amazon) by Steven Clifford should be mandatory reading for all compensation committees and those who vote proxies for large funds. The book is easily read and understood by the layperson. It also includes the fact-based evidence needed to convince fiduciaries that voting against most executive pay packages is one of the first steps to restoring shareholder value, company sustainability and the very foundations of American democracy.

Why combine CEO and chair positions or pay executives with options when both practices lead to poor results? We don’t except “everyone else does it” as an excuse for harmful behavior from our teenagers; why should we accept it as a reason from compensation consultants and the former CEOs sitting on most corporate boards? Clifford also outlines possible remedies but nothing will be done unless we shift public opinion. If widely read and discussed, The CEO Pay Machine could be central to change.

The CEO Pay Machine: My Efforts to Date

For years, I have included the following in a footnote on my announced proxy votes for the pay of named executive officers (NEOs):

For more than a decade, I have been talking with those who vote proxies for large and small funds about the cumulative impact of the “Lake Woebegone effect.” Compensation committees typically pick comparison peer groups for NEOs based on aspiration. Technology companies might pick Oracle, which paid Mark Hurd $41M last year. Communications companies might look to Charter Communication’s $98M paid to Tom Rutledge and/or the $69M CBS paid Les Moonves. Tourist companies might look to Wynn Resorts paying Steve Wynn $28M. They almost never include companies based outside the United States in their peer groups because their CEOs are generally not paid as much. That is true even when such foreign companies are winning the game of competition, as they will do if we continue to reward CEOs excessively and fail to pay American workers enough to buy the products and services our companies make.

Those responsible for voting the proxies of funds will often acknowledge the system of overpaying leads to a recalibration of the base each year and an ever increasing proportion of company wealth diverted to CEO pay. However, as long as pay is tied to “performance” (often through indicators that bear little or no correlation to effort), they generally vote in favor. In fact, many executives at funds are paid substantive bonuses using poorly designed metrics similar to those outlined by Clifford. No wonder they don’t fight executive pay.

Research finds, institutional investors and proxy advisors fail to use economic value creation as a major factor in Say-on-Pay voting. The Alignment Gap Between: Say on Pay Voting and Creating Value.

Admittedly, the academic studies I reference in my typical footnote are not geared to the layperson. However, just about anyone can read Steven Clifford’s book with ease. For example, his chapter “You Get Paid Like a CEO: A Fairy Tale” tells how a bank loan officer’s pay of $75,000 could easily balloon to $5,845,000 if the company decided to “pay for performance,” like how they pay their CEO. (see also What if We Talked About Diet Plans Like We Talk About Comp Plans? from As You Sow) Hold onto your seat for a fun ride, but be warned, you might get sick along the way as you read. Clifford’s explanation of CEO pay may sound like smoke and mirrors but I can assure you the techniques used to inflate pay are standard throughout corporate America.

Normally, when I review a book I discuss several highlights. In the case of The CEO Pay Machine, that seems redundant. You can easily listen to one or both of the following two interviews and get an excellent grasp of key elements.

Broc Romanek of TheCorporateCounsel.net posted his interview with Steven Clifford on June 15, 2017, before I knew of the book’s existence. Readers should subscribe to his “Big Legal Minds” podcast series. Romanek writes,

Steven’s new book – “The CEO Pay Machine: How It Trashes America & How to Stop It” – is a game-changer. There’s nothing out there like it. In 280 pages, Steven clearly lays out the broken components of a typical executive pay package – along with the broken board processes that led to them.

Play the interview at this link to “The CEO Pay Machine” on Big Legal Minds.

Barry Ritholtz of the Big Picture posted a more in depth interview on August 26, 2017.  Ritholtz writes,

Clifford notes that the pay gap between chief executive officers of publicly traded U.S. firms when compared to their workers has changed dramatically — its grown 95 times faster than that of their average workers. In the 1970s, CEOs were paid 25X their employees; today, CEOs get paid 300 to 700 times more than the average worker.

From 2011 to 2014, there were 4 CEOs who earned $100 million per year; these companies could have paid them 90% less and still generated the same returns. Despite all of the usual outrage, very people critics understand the factors that have caused the upward spiral in executive compensation… What was supposed to be pay for performance, he said, has become a scheme to transfer wealth from shareholders to insiders.

Also worth reading is a fine review posted on July 18th by Rosanna Landis Weaver of As You Sow. Here’s a taste:

Likewise Clifford questions whether bonuses truly motivate executives to do their very best work. As he does throughout the book, Clifford sites academic studies. “A meta-analysis of 128 studies of human behavior demonstrated that large monetary incentives tend to decrease motivation and performance.”

But as also seen throughout the book, it is his analogies that are the most powerful. He identifies “the performance delusion” as that corporate boards can effectively measure and reward CEO performance. Here he notes, “I could observe an evening of roulette and conclude that the best gamblers were rewarded for their performance. How do I know they were the best gamblers? Easy. They won the most money.”  This is how  compensation consultants defend the “link” between pay and performance.

Be sure to keep up with their blog on CEO pay and download As You Sow’s report, THE 100 MOST OVERPAID CEOS: ARE FUND MANAGERS ASLEEP AT THE WHEEL?

As I wrote above, I urge readers to listen to the above linked interviews and to buy the book. Clifford looks at the highest-paid CEOs, their companies and others to formulate the following five delusions that most boards accept as gospel: 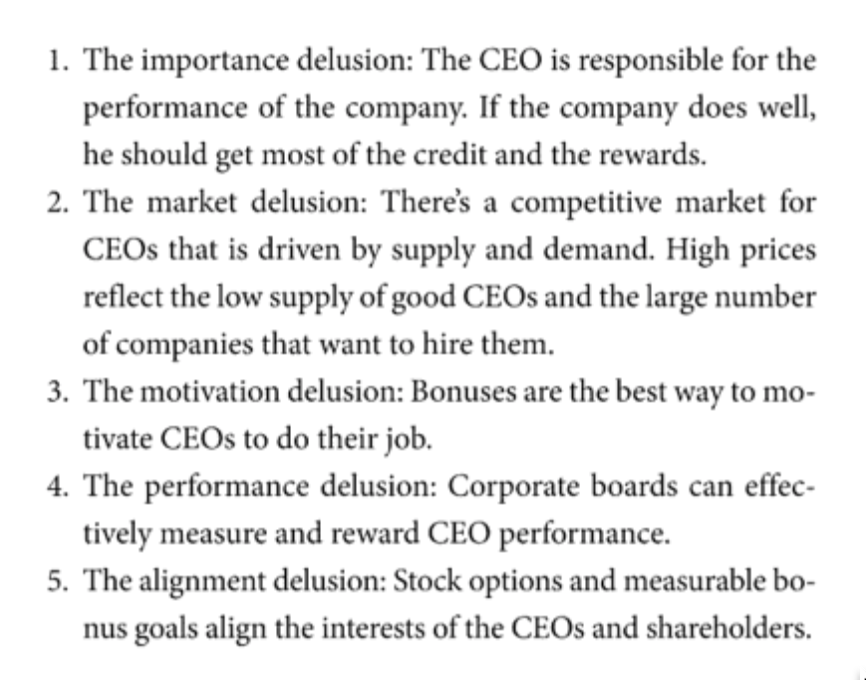 CEO Pay Machine: The Fix and How to Get There

In his last chapter, Steven Clifford discusses how to fix the CEO Pay Machine to work better for shareholders and society. With regard to boards, they should: 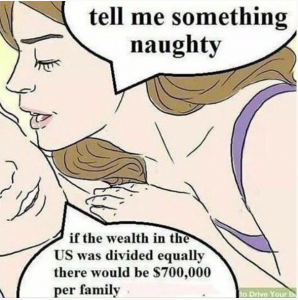 With regard to society, Clifford recommends a luxury tax on “excess” compensation above $6M. Anything above that amount would not be tax deductible. All compensation would be included in that $6M limit, including retirement benefits, 401(k) matches, and other perks.

Advocating a luxury tax seems new, but many have pushed to get rid of the tax deductibility of “pay for performance,” to no avail. With regard to Clifford’s recommendations to boards, academics have made similar recommendations but, as a former CEO, maybe he will get more traction.

CEO Pay Machine: Could it Stir More Traitors from the 1%? 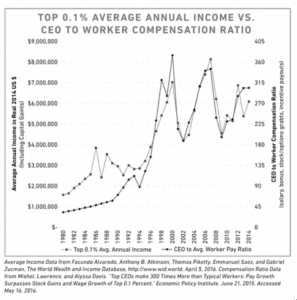 What is most striking about The CEO Pay Machine is that the author is a former CEO, compensation committee member, has read Thomas Piketty, understands CEO pay is at the root of growing inequality, understands it to be a central problem to society’s ills, wants to solve the problem AND is a talented writer who knows how to tell a good story. His book is not a dry academic study from an “objective” observer. Instead, it is a conversion story by a participant.

It has often been pointed out that people in red states vote against their own economic interest (favoring tax cuts for the wealthy and big business, regressive consumption taxes,  privatization of public health and other functions, militarization, and de-regulation).

However, most in the top 1-2% staunchly vote in their own economic interests and fight any attempt to redistribute wealth. See the Wall Street Journal video “Do You Make $400,000 a Year But Feel Broke?” depicting the hard times faced by a couple making only $400,000 a year. Such people probably have little sympathy for the poor because they can’t even imagine living with lower expectations.

We need more traitors from the 1-2% class. In the meantime, I’ll vote against most pay packages, file proposals to separate CEO and Chair positions, and will work more closely with As You Sow. I welcome reader suggestions on shareholder proposals that can address the issues without running afoul of Rule 14a-8(i)(7) the “ordinary business” exclusion. Your comments on the book and suggested solutions are always welcome.

How to Think: Reviewed
Elect Flaherman and Brown to CalPERS