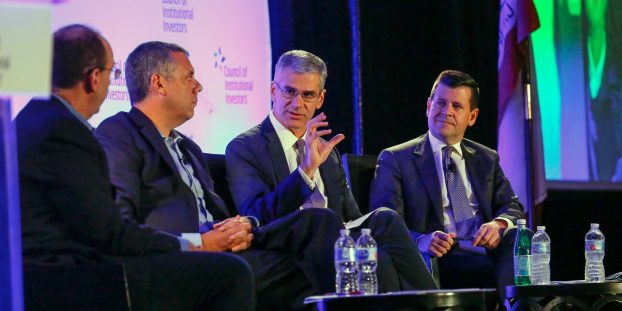 Are public companies an endangered species? If so, why? How can we solve that problem? At last week’s Council of Institutional Investors (CII) Fall Conference there as an informative panel discussion entitled Public Companies: An Endangered Species?

Panelists were David Brown, Michael Mauboussin, and Robert McCooey moderated by the always erudite and entertaining Frank Partnoy, one of the best facilitators in the corporate governance industry.

I am a sociologist by training, not a trained journalist. My typing speed is abysmal. As I age, my hearing is going as is my vision. I have no intention to create ‘fake news.’ However, it is probably best not to rely on my reported numbers. I’ll refrain from quoting, since I probably would have too much difficulty capture every word. I don’t think it is quite down to disclaiming my notes as for “entertainment purposes only. I try to be informative, although readers may not always be able to tell what opinions are mine and what are those of panelists. Hopefully, you will still find it thought provoking.

If you were there and heard something else, let us know by leaving a comment below. Even if you were not there but have something to contribute, please do so.

“Let your winners run” is one of the oldest adages in investing. One of the newest ideas is that the winners may be running away with everything. Jason Zweig (No, he wasn’t even on the panel)

The U.S. had more than 7,000 public companies 20 years ago. Now we have fewer than 4,000 but market cap is moving up. There was a huge drop in public companies around the Dotcom bubble burst. Private capital has become less expensive. Companies have learned that keeping out of the public eye during their gestation period generally leads to bigger returns. Other factors are an increase in delisting, M&A and the availability of private capital.

I think most, if not all, of the panelists agreed that many companies that went bankrupt should never have gone public in the first place. However, while America now has fewer public companies than we did in 1976, other countries have increased their number of listed companies. One explanation is that many “developing” countries have joined the ranks of one elite countries like the US and UK with strong financial institutions and independent stock exchanges. Foreign companies no longer need to come to the US but can list abroad, in or closer to home markets.

Public companies create more jobs, so most would agree that we want them. Raising capital isn’t the problem it used to be (I think social media and the growing concentration of wealth contribute). Nascent companies have access to more private equity funds and there are many more of them.

Another factor may be that bigger, older, stronger balance sheets are easier for analysis and indexed to understand. The IPO market is less risky today, although that should be a positive. Companies that need capital are able to find capital but they have to spend time finding it. How do we put investors with early stage companies? There is currently a disconnect between firms willing to pay for research and the researchers.

Almost everyone is a high frequency traders. The spread is not there and cost of of transactions have eroded.

How much is the weight of regulators? SOX is cumbersome, expensive. Yet, most agree it has served a purpose in raising investor confidence. Another positive mentioned: companies are not listing elsewhere in the world to avoid U.S. specific issues.

It is just less attractive to list. The trend was well in place before SOX. 2/3 of companies gone are micro-cap. 2/3 or 3/4 of those were gone before SOX. The JOBS Act has been very helpful. Helpful that companies can keep data confidential for longer.

McCooey recommended the NASDAQ paper, The Promise of Market Reform, which among other things, discusses the current $2,000 threshold for filing proxy proposals and recommends:

Deleting this meaningless dollar threshold and instead requiring that a proposing shareholder hold at least 1% of the issuer’s securities entitled to vote and increasing the holding period to three years, would ensure that shareholder proposals representing the views of a meaningful percentage of the companies’ long-term owners are considered at shareholder meetings.

These panelists may know a lot more than me, but I know the proxy proposal processes is not why public companies have become an “endangered species.” Requiring almost a billion dollars in stock held for 3 years to be able to file a precatory proposal with Apple? That’s just crazy talk. Unfortunately, we are living in crazy times and many of the powers that be want corporations to be essentially democratic-free zones.

McCooey went on to say SEC filings are too burdensome. Litigation is one reason why companies don’t come to the US. Tax reform is needed. We need dividends to be deductible. Worry about short sellers. 5% owners have to file but short-sellers don’t if short 5%. NASDAQ Private Market is a new way to raise funds among high market individuals. (Another way to increase the inequality gap too. That’s me again.)

Sorry, I was thinking about my own question and didn’t get to take much in the way of Q&A notes from others. Should M&A be curbed? The correlation between M&A activity and IPOs used to be strong but not so much now. Entrepreneurs can borrow a ton now at low rates. M&A doesn’t destroy value since financial crisis. Jobs Act changed requirement to go public from 500 to 2000 investors. It is cyclical; many are going IPO soon.

I did not get to ask my question. Maybe that is just as well. It was more of a consideration than a real question. From my vantage point close to Silicon Valley, I see the Internet and inequality changing everything. Companies used to have to raise a lot of money to build factories, hire and train employees, set up distribution networks, etc. Now they can plug into the Internet and scale up all over the globe at minimal cost.

The money is easily gotten on Sand Hill Road or wherever the venture capitalists have moved.  With inequality rising, there are a lot more poor people… but rich people are easier to find as well. Many companies only need to go to IPO when initial owners want to cash out, since that money is no longer necessary to scale up. Now NASDAQ Private Market and other vehicles are filling that gap as well, so going public just is not needed for many types of companies.

In this new world, just make sure your personal security systems are robust. While waiting for the apocalypse, read how The CEO Pay Machine is destroying America. Then ask your pension or mutual fund if they still believe the “pay for performance” in a land of CEOs living in Lake Woebegone, where all CEOs perform above average.

Since most directors assume their CEO performs at the 75% level, compared to peers, pay automatically ratchets up each year. In my opinion, funds that don’t vote against at least half the pay packages aren’t voting to end rising inequality.  Of the largest mutual funds, Dimensional Fund Advisors opposed 53% of pay packages for the 25 most overpaid CEOs, while Blackrock opposed only 7% of them. (THE 100 MOST OVERPAID CEOS: ARE FUND MANAGERS ASLEEP AT THE WHEEL?)

Public Companies Endangered Species? Ratcheting CEO pay down just might be the most important step we can take to end inequality. If that happens, eventually companies might just find it harder to find venture capitalists and would be more likely to move to the IPO stage earlier. Yes, it will take a lot of outrage and a lot of work to change course. However, with say on pay and coming pay ratio rules, we have the tools, if only pension and mutual funds will use them. Feel small? We could by giants.

Find more from the Fall Conference of the Council of Institutional Investors at #ciifall2017.