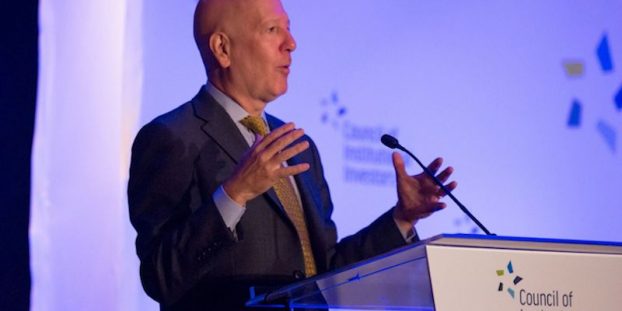 Richard Bookstaber discusses value at risk modeling — easily the most illuminating talk at #CIIFall2017. It was certainly statistics aimed at the layperson. However, in listening to him, I was glad I completed by PhD comprehensive in statistics 35 years ago.  I scribbled a few notes. Although I can’t guarantee accuracy, if I motivate a few fund managers to read his The End of Theory: Financial Crises, the Failure of Economics, and the Sweep of Human Interaction I will be delighted.

Value at risk models are moving. Early theorists believed economics would only become a science if approached with mathematical rigor, removing human sentiments, and concentrating on the underlying static causes. After more than 100 years, we began to see that we couldn’t forecast the future by modeling the past. The world isn’t static. Under Dodd-Frank, we began stress tests. What it this happens? If I understand correctly, Richard Bookstaber wants to take modeling a step further – essentially stress testing with agent-based models. Not only does history not repeat itself, people are unpredictable agents. Modeling needs to factor in the dynamic interactions of agents, their models and how activity is ever-changing through feedback loops.

The Four Horsemen of the Econopolypse – aspects of reality that traditional economics sweeps under the rug… emergence, non-ergodicity, radical uncertainty, and computational irreducibility.

Below are a few more concepts discussed by Richard Bookstaber but I don’t have the notes or time to further decipher. Egress – Liquidity, Flammability – Leverage, Crowding – Concentration, Asset shock or funding shock; Forced sales do to leverage; Price effects do to concentration; Further declines due to illiquidity; Cascades and Contagion; Key Data missing – leverage, concentration, illiquidity, collateral damage. Events have fat tails; they are not symmetric. Movement into tails is not smooth. Risk doesn’t resolve at a constant rate. We must move to an agent-based approach.

The end objectives are to manage risk, generate return, and dampen the crises. Develop scenarios, crowd-source the data and mirror the investment process. High frequency traders have kill switches. That accelerates crisis because trading stops and liquidity drops. Leverage is somewhat tamed but not liquidity. Passive index investing is part of the issue.

If I had my camera, I would have taken some shots of his interesting explanation of cascading impact. See Richard Bookstaber’s YouTube video below, especially starting about 30 minutes in. Read his blog.

My cynical take away is that few will adopt Richard Bookstaber’s methodology because we want simplicity. However, the world isn’t simple. Hopefully, a future CII meeting will feature Bookstaber leading a wise group of investors, feeding cascading scenarios into Watson or some other AI device.