FedEx Fights for a democratic-free zone @ 9/25/2017  annual meeting. Seeks to maintain fake proxy access; refuses to disclose lobbying payments; wants to continue to monitor say-on-pay vote to lobby those who vote against; wants to disrespect human rights where allowed by state laws.

FedEx Corporation provides transportation, e-commerce, and business services worldwide.  FedEx is one of many stocks in my portfolio. ProxyDemocracy.org had collected the votes of two fund families when I checked and voted. Their annual meeting is coming up on September 25, 2017. Vote today. If you have already voted, and want to change your vote, you can. Your last vote will override the previous vote. More than 90% of retail shareholders don’t bother to vote, so think of yourself as voting for 10.

I voted FOR Proxy Access Amendments and all the other shareholder proposals. See how and why I voted other items below. I voted with the Board’s recommendations only 25% of the time. View Proxy Statement via SEC’s EDGAR system (look for DEF 14A).

From the Yahoo Finance profile: FedEx Corporation’s ISS Governance QualityScore as of September 1, 2017 is 4. The pillar scores are Audit: 2; Board: 8; Shareholder Rights: 3; Compensation: 6. Brought to us by Institutional Shareholder Services (ISS). Scores range from “1” (low governance risk) to “10” (higher governance risk). Each of the pillar scores for Audit, Board, Shareholder Rights and Compensation, are based on specific company disclosures. That gives us a quick idea of where to focus: the Board. You can tell FedEx fights its shareholders from just looking at its ISS scores, which are low when it comes to audit and shareholder rights.

FedEx’s Summary Compensation Table shows the highest paid named executive officer (NEO) was Chairman and CEO Frederick W. Smith at $15.6M in 2016. I am using Yahoo! Finance to determine the market cap ($58.7B) and I am roughly defining large-cap as $10B, mid-cap as $2-10B, and small-cap as less than $2B. FedEx is a large-cap company. According to EY Center for Board Matters, the 3-yr average CEO compensation at large-cap corporations is $12.7M (mid-cap corporations was $6.2, small-cap corporations was $3.4), so pay was well above the amount paid to average CEOs. FedEx shares outperformed the NASDAQ over the most recent one-, two-, and five- year time periods, but how hard should that be, given the rise of Amazon.com and increased volume in shipping? FedEx underperformed in the most recent ten-year time period.

we believe that the Company’s compensation policies and procedures are centered on a competitive pay-for-performance culture, strongly aligned with the long-term interest of its shareholders and necessary to attract and retain experienced, highly qualified executives critical to the Company’s long-term success and the enhancement of shareholder value. Therefore, we recommend a vote FOR this Proposal.

But Egan-Jones does not rate the impact of ever increasing CEO pay on society and the ultimate viability of all the stocks in my portfolio. I voted “AGAINST” the say-on-pay item. The “Lake Woebegone effect,” where everyone is above average and the averages are recalculated upward every year, has to stop. We cannot just keep voting in favor of higher and higher pay packages. FedEx has done well but is that really because of their CEO? I doubt it. Read CEO Pay Machine Destroying America.

I have no reason to believe the auditor has rendered an inaccurate opinion, is engaged in poor accounting practices, or has a conflict of interest. However, Egan-Jones recommends voting against, favoring auditor rotation after seven years. I agree and voted against the Auditor. When I vote against the auditor I also vote against the committee: Paul S. Walsh (Chairman), Marvin R. Ellison, John C. (“Chris”) Inglis, Shirley Ann Jackson, Susan C. Schwab. Again, committee members should be held accountable for their poor recommendations.

As mentioned above, I voted “Against” the pay package and auditor. As is my habit, when I vote against those items, I also vote against/withhold on the committee members.

Frederick W. Smith is a current Chairman of the Board and CEO of the Company and combined with the Board Rating  of Some Concerns,  the Company has received we recommend that clients WITHHOLD votes from this nominee.  We believe that there is an inherent potential conflict, in having the CEO or former CEO serve as the Chairman of the Board. Consequently, we prefer that companies focus on the following areas to improve its corporate governance practices: separate the roles of the Chairman and CEO, hold annual director elections, have one class of voting stock only, have key board committees consisting of independent directors and majority of independent directors on board and include non-binding compensation vote on agenda to further ensure board independence and accountability.

That seems like excellent advice to me, so I did the same, adding them to the previously mentioned withholds.

Myra Young (my wife) is the proponent and I wrote the proposal, you know I voted ‘FOR.’ FedEx has a “lite” version of proxy access. Egan-Jones recommend FOR as well.

Current bylaws limit shareholder nominees to 20% of the 12 member board or 2. The proposal recommends one quarter of the directors then serving or two, whichever is greater. In the case of FedEx, that would yield up to 3 candidates.

Research suggests three women may constitute a critical mass for reframing the decision-making culture of boards. Similarly, having three shareholder-nominated directors may help ensure not only participation on each of the committees but a critical mass for bringing a shareholder perspective to Board decisions. Research also finds that director insulation from removal is associated with lower firm value and worse performance.

One thing few take into account is that shares are not consistently held. Funds frequently buy or sell shares. Looking at funds that held in the last reporting period does not tell you which funds have held significant amounts over the last 12 reporting periods.

FedEx fights proxy access by claiming to have it but their form of proxy access is like calling gasoline “natural,” since it is made from a product found in nature. Three shareholder nominees could form critical mass. No cap on group members would give a voice to smaller funds and even individuals concerned with FedEx’s sustainability — if they can join together with like-minded investors. Remember, this would just get them on the proxy. As a shareholder, you would still help decide who gets elected.

The International Brotherhood of Teamsters General Fund introduced this proposal. Investor Voice is a co-filer.

The proposal is part of an ongoing investor campaigni for greater corporate political spending disclosure. Transparency and accountability in corporate spending to influence public policy are in the best interests of FedEx stockholders. Without a clear system ensuring accountability, corporate assets can be used to promote public policy objectives which can pose risks FedEx’s reputation to the detriment of stockholder value. See Teamsters Demand Lobbying Transparency at FedEx. Egan-Jones recommends against because of cost. The real reason FedEx fights it isn’t cost but possible embarrassment. They have the data. I voted ‘FOR.’

This is a new type of proxy proposal from John Chevedden, so many funds and proxy advisors probably have not taken the time to analyze it. The proposal essentially asks that FedEx not do an end-run around a vote by shareholders against pay by prohibiting the use of interim vote tallies to alert them when to solicit votes to ensure passage.

Simple idea; good idea. Put us on an even playing field. I voted ‘FOR.’

NorthStar Asset Management filed this proposal. The proposal asks for a report detailing the known and potential risks and costs to the Company caused by any enacted or proposed state policies supporting discrimination against LGBT people, and detailing strategies above and beyond litigation or legal compliance that the Company may deploy to defend the Company’s LGBT employees and their families against discrimination and harassment that is encouraged or enabled by the policies.

When FedEx fights it own employees or fails to stand up for their rights, we all lose. I voted ‘FOR.’ 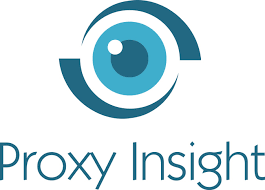 FedEx Proxy Voting Guide: Votes Against Board Position in Bold

As mentioned above, ProxyDemocracy.org had collected the votes of two funds when I voted. Proxy Insight reported additional votes from Canada Pension (CPPIB), Teacher Retirement System of Texas (TRS), and Calvert. All voted FOR #6 amendments to FedEx proxy access bylaws. Of all the funds, Trillium voted closest to how I voted.

My votes against management recommendations are in bold below. (under CorpGov)

Stockholder proposals (other than director nominations) intended to be presented at FedEx’s 2018 annual meeting must be received by FedEx no later than April 16, 2018, to be eligible for inclusion in FedEx’s proxy statement and form of proxy for next year’s meeting. Proposals should be addressed to FedEx Corporation, Attention: Corporate Secretary, 942 South Shady Grove Road, Memphis, Tennessee 38120.