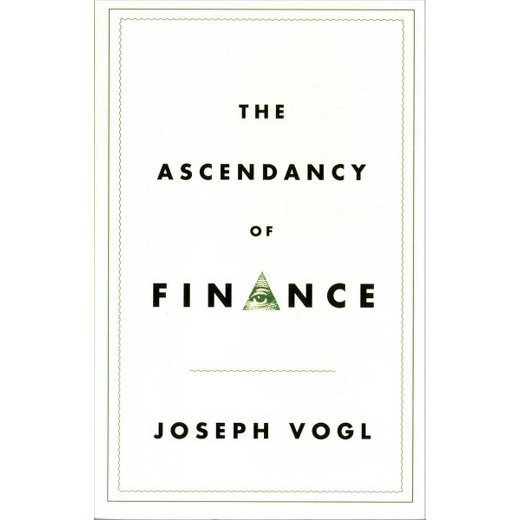 The Ascendancy of Finance (link) by Joseph Vogl, explains the dramatic transfer of power to  the financial sector that occurred over centuries but accelerated during the recent financial crisis. Traditionally, markets limited state power and were, in turn, restrained by the nation states. As Vogel notes, “In this theoretical myth, spaces of freedom are weighed against concerns of security…” Finance, once a mediator of capital, now threatens to rule both industry and politics.

Ascendancy of Finance: Not an Easy Read

One sentence from the book, which cogently explains where we are with respect to the ascendancy of finance, also provides a good example of the book’s density, aggravated by long complex sentences.

From 2008, in connection with the recent financial and economic crisis, an emergency politics has formed whose quality and character demonstrate a number of basic features: exceptional situations that require extraordinary instruments and measures; negotiations that take place behind closed doors, that are determined by the rhythm of the financial markets, and that clash with the lengthiness of formal procedures, an urgency that forces decisions to fall firmly in favor of the common good; and the informality of powerful executive bodies that might be described as hastily convened ‘committees of public safety.’

The best known “Committee of Public Safety” was created in 1793 as a de facto executive government in France during the Reign of Terror stage of the French Revolution. Are we there yet?

Ascendancy of Finance: One Minute Version

Historically, money creation was the domain of sovereigns. Over time, especially in democracies much of the job of regulating capital reserves and money supply was delegated to central banks, run as semi-independent constitutional anomalies.

In an age of derivatives, algorithmic trading, Bitcoin and other pseudo forms of money, what money does and what it means has become “unpredictable and erratic.” “It remains unclear what precisely can be regulated and how.”

Money and credit are essentially interchangeable and ultimately based on private credit. The generation of private credit is independent of the limits of available money. It is therefore impossible to base the intervention and decisions of central banks on reliable quantities and rules.

Vogl notes that in 1990 all market transactions combined totaled five times global GDP but by 2007 it was seventy-three times. As assets become liquified, price movements have become less correlated to conventional measures of the economy, such as productivity, credit ratings, etc. Financing requirements are met through securitization more than by borrowing from central banks. Credit default swaps “de-risk.” They also make it more difficult to calculate risks and they heighten the spread of contagion.

Control of money creation, liquidity and credit shifted from regulated banks to deregulated financial markets. Central banks have ceased being lenders of last resort, since the finance sector is now creating money. Instead, central banks are now investors of last resort, through quantitative easing, buying securities with money they created to keep financial markets from failing.

Given the massive increase in liquidity, financial innovation, unknowable risk and private money creation, the notion of a determinate and determinable volume of circulating money appears like a ‘historical curiosity, like belief in a ‘flat Earth.’

Of course, as national economies become ‘financialized,’ the finance sector obtains more and more political power. As I read Volga’s critique, I do not see any easy way out. Trump can pull the United States out of the Trans-Pacific Partnership and the United Kingdom can leave the European Union but neither action is likely to forestall the ascendancy of finance. The transfer of public functions to ad hoc bodies continues, undermining the authority of governments and the distinction between public and private. The normative appearance of rationality make transfers most attractive, “precisely where the reliability and efficacy of political structures are lacking.”

In international arbitration courts, major corporations and governments meet on an equal footing. Credit conditions dictate political restructering in countries such as Greece. “Policy-making is pre-empted by market preference.” “The market imprisons the policy-making process.”

If I read him correctly, Vogl sees the rise of permanent public debt as one of the primary reasons why expansion of financial markets has led to what he terms “seigniorial power.” He devotes a whole chapter to the term which is too complex to describe as part of a brief review. Priority has shifted to ensure “the vital interests of creditors in the profitable circulation of national debt.”

The crux of our dilemma seems to be that economics has taken the dominant place in determining most human interactions. Seigniorial power seems to be about “diffusing corporate structures throughout the social body.” Risk is individualized. Pensions, healthcare, education are all tied to debt and market fluctuation. Systematic risk is transferred downwards.

About 1,300 corporations dominate 80% of the global economy; 147 (most in the financial sector) control 40% of worldwide profits. Typically, these companies hold a controlling interest in each other. The ascendancy of finance means, they increasingly make the rules.

With the ongoing collateralization and confiscation of the future, they  market itself becomes a creditor-diety, which in the last resort decides the fate of currencies, national economies, social systems, public infrastructures and private savings… financial systems have turned risks into clear and present dangers.

The Ascendancy of Finance presents a convincing explanation of a major threat, not only to democracy but to the individual’s freedom to live a meaningful existence, instead of as an  economic robot. Like Mary Shelley’s Frankenstein, Vogl offers little in the way of recommendations for how to deal with the monster we have unleashed. Shelly warned against ambition as the Creature morned his creator’s death and vanished onto the ice in an act of self-sacrifice. Our creation is much further along and is unlikely to follow suit.

Elon Musk and others have gotten a lot of press about the dangers of out of control artificial intelligence. Vogl’s warning of the ascendancy of out of control finance seems more of a likely near-term problem.

As I have argued elsewhere (The Individual’s Role in Driving Corporate Governance), one solution might be individuals demanding, creating, and utilizing democratic mechanisms within the governing structures of large financial corporations to ensure the convergence of public and private interests. Individuals need to step up and participating as full human beings, not rational economic robots, in governing corporations more democratically. That, in turn, could change the dynamics of finance. However, after reading The Ascendancy of Finance, I am unsure as to where hope lies for Joseph Vogl.