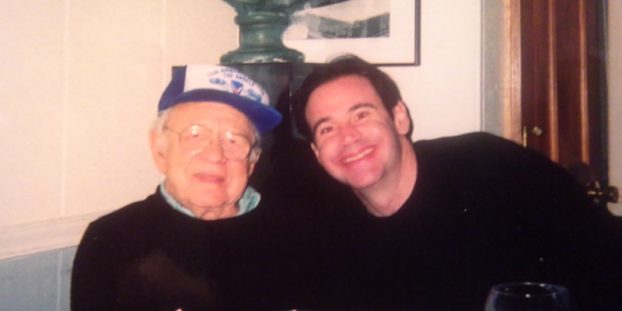 William Steiner recently became the most experienced shareholder activist alive to win majority votes for shareholder proposals at public companies. A few months ago, he celebrated 40 years of shareholder activism with an overwhelming victory at Haemonetics Corporation (HAE). The following is based on an interview with Mr. Steiner by his son, Kenneth Steiner, who works with his father to carry on what has become a family legacy.

Steiner attended Morris High School in the Bronx in the 1930s, graduating at age 16. He then attended City College in Manhattan where he eventually received his BBA after returning from service in WWII.

Steiner had a long and successful career as the owner of Accurate Personnel, one of the largest employment agencies in New York City between 1949 and 1982.  After selling his business, William Steiner became a full-time investor and used the proceeds from his business to build a sizable stock portfolio.

Steiner has been actively involved in corporate governance and shareholders rights since the 1970’s. At that time he started attending annual meetings as an interested shareholder of various companies. Before attending the annual meetings he would carefully review the proxy statement and make notes on items of interest to him. This included matters of director independence or conflicts of interest,  excessive executive pay or conflicts of interest between the company and so called outside auditors.

At times, he worked closely with both John and Lewis Gilbert, the famed activists who  started the entire shareholder rights movement many decades before and who were acting alone against the entirety of corporate America.

He studied value investing and became an expert in fundamental security analysis.  Over time Steiner realized, “Unfortunately, many good companies were being mismanaged, causing their companies to under-perform.” This exposed a deficiency in portfolio management theory. Without a good CEO and an active and engaged board of directors, any company could be run for the benefit of management, not shareholders.  Too many shareholders were disengaged and allowed incompetent management to get away with whatever they wanted, including excessive compensation  or conflicts of interest.

I decided to start attending annual meetings and asking tough questions.  As you could imagine the executives were often not very happy to face criticism!  They were used to a submissive shareholder base.

One of the first meetings he attended was Citibank in the late 1970. Steiner criticized the board and management for excessive compensation, perks and a directors retirement plan. After the meeting former President Gerald Ford (an outside director) approached him. According to Steiner, he “put his arm around me and told me I was correct. Soon thereafter, Ford resigned from the board.

Many companies  had never had an individual shareholder raise tough questions at the annual meeting.  Soon I realized that they actually respected me for speaking out and, indeed, feared having any of these abuses exposed.  The companies started becoming friendlier towards me in order to avoid trouble.

Many asked to take me out for dinner, etc.  However I would never let them buy me more than a cup of coffee because I did not want to owe anybody anything.  While it was valuable to have conversations with the CEO or his representative, I became aware that the real power for an individual shareholder was through the proxy statement.

I saw that a powerful resolution addressing a key issue in the official proxy statement would reach thousands of shareowners and bring unwanted attention to the board of directors (and important reforms could be won. Some companies changed policies in response to the exposure. Eventually, I actually became friends with some of the CEO’s and investor relations personnel. They appreciated my sincere interest as a shareholder activist and saw I was not a so-called ‘gadfly.’

Often companies would offer to make changes if I would agree to withdraw my proposal.  I was always amenable to a reasonable agreement if the company would make some improvements in their corporate governance. I emphasized to the companies that I was not an enemy but actually a friend of corporations and capitalism as a businessman myself.

I told them the only way to sustain support for capitalism in America was for companies to do the right thing for their shareholders, employees and the community. If they were selfish and insular they would kill the goose that laid the golden egg!

After several years of acting alone as active investor and shareholder proponent William got a call from Susan McBride in Washington, DC who was working for an organization being founded by famed investor and oil tycoon T. Boone Pickens. A group was being formed to promote shareholder rights nationwide and Steiner had come to their attention.

He was asked to volunteer to help organize and present shareholder proposals; to  educate the public; and, eventually, to influence Congress and public officials. Steiner says,

I was closely involved with both Boone Pickens and Ralph Whitworth in the highly successful United Shareholders Association (USA) in the 1980’s, which sponsored shareholder proposals across the country. It was very rewarding and helped bring these important issues to a much more prominent place than ever  before.

I worked closely with Ralph Whitworth who was the top assistant to Boone in the organization. We accomplished a lot. I  was extremely sad to hear that my friend Ralph Whitworth had unfortunately died of cancer last year after a valiant struggle. He did a lot for shareholders rights and became a very successful hedge fund manager in subsequent years.

William Steiner has been given credit by governance expert Nell Minow for almost single handedly bringing about the elimination of pension plans for outside directors. Professor Charles Elson, who heads the John L. Weinberg Center for Corporate Governance at the University of Delaware, teaches his efforts as part of the college curriculum. See Shareholder Activist, From Basement to Boardroom.

Steiner also successfully brought proposals to pay directors primarily in stock; ensure the majority of directors are independent; eliminate the staggered board system; and also  ensure outside accountants are not simultaneously consultants on CEO pay at the same company. Other successful resolutions eliminated director entrenchment devices such as poison pills from corporate bylaws.

These accomplishments occurred due to his efforts at hundreds of companies over the past thirty years.  In recent years, he won majority votes on dozens of proposals, ranging from proxy access to eliminating super majority voting standards and many other issues of concern to large and small shareholders alike.

He is very satisfied with the numerous positive changes that have occurred over the past thirty years but believes much work remains. William Steiner is generally a long-term shareholder. He follows the stock market regularly and trades occasionally. He intends to introduce about ten shareholder proposals the upcoming 2007-18 proxy season, vowing to continue his fight for democracy.

I will stay active to fight for our rights as shareholders. I was proud to volunteer for military combat service during World War II in 1942. I served with the famed 11th Airborne Glider Regiment in the Pacific theater and won a Bronze Star for bravery during combat in the Philippines in 1944. I was proud to be part of that effort.  We helped preserve freedom and democracy for America and the world. 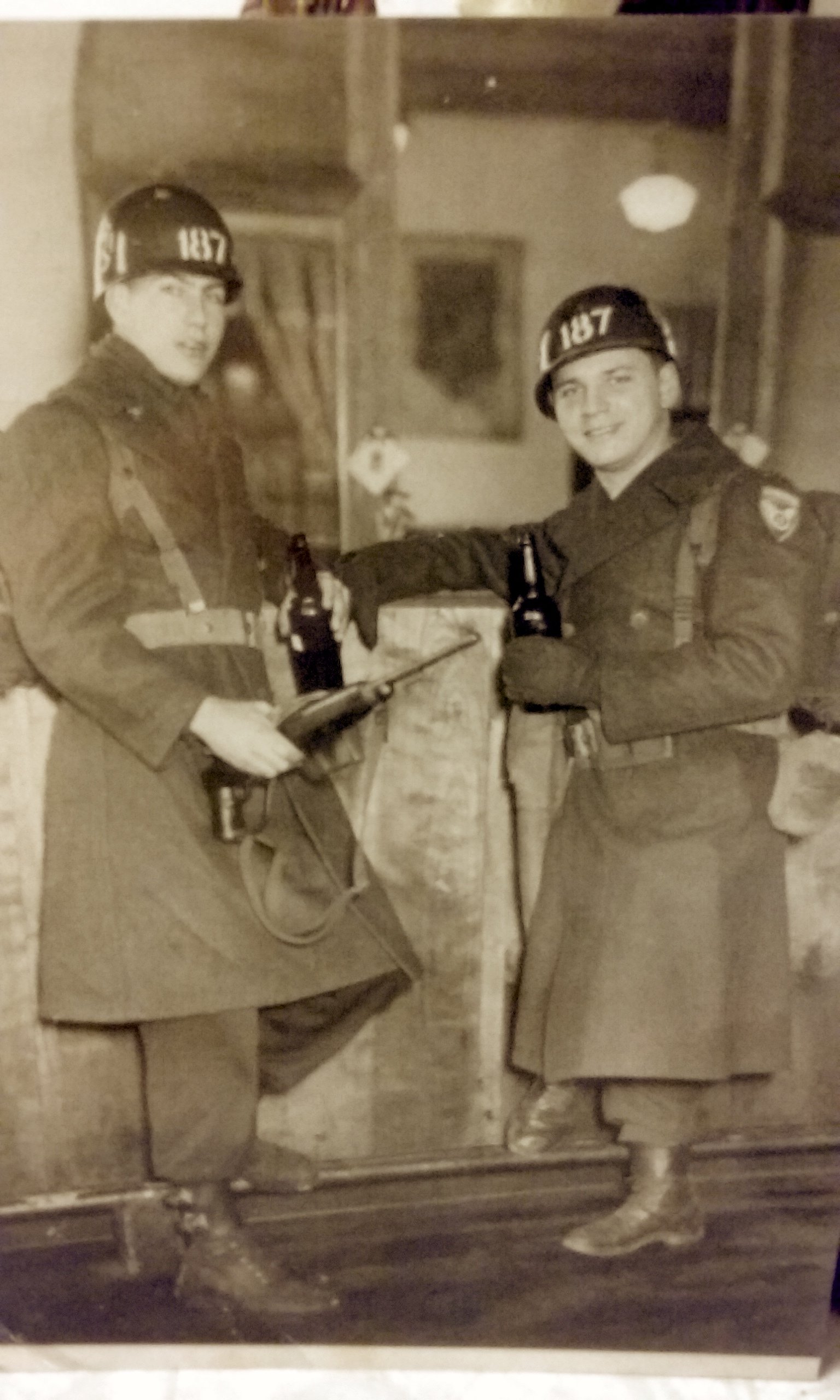 William Steiner (right) & Bob Huntley during the occupation of Japan, 1945

The fight for shareholders rights is my way of fighting for democracy and rights at home. I will continue to be active as long as I can as an individual shareholder. Not only is it the right thing to do but I also feel compelled to take action when others who should, like most of the big institutional investors, are unfortunately lacking in effort due to cowardice or conflicts of interest.

I was glad to see the very high vote at Haemonetics, which shows the issues I raise are legitimate and have broad public support. [Steiner’s proposal to move to a simple majority standard, for amending both the charter and the bylaws, won 77% of yes/no votes cast.]

Any attempt by Congress or others to disenfranchise shareholders with new rules or laws would be a disgraceful step backwards for all investors and our country. We need political leaders who look out for citizens like President Harry Truman, a great man. I once had the pleasure of meeting him at length once, soon after he left office. Truman was never afraid to take on powerful corporations or special interests. I will continue to fight for our rights and hope other investors will join us. My hero Winston Churchill had the right philosophy: no end, save victory!