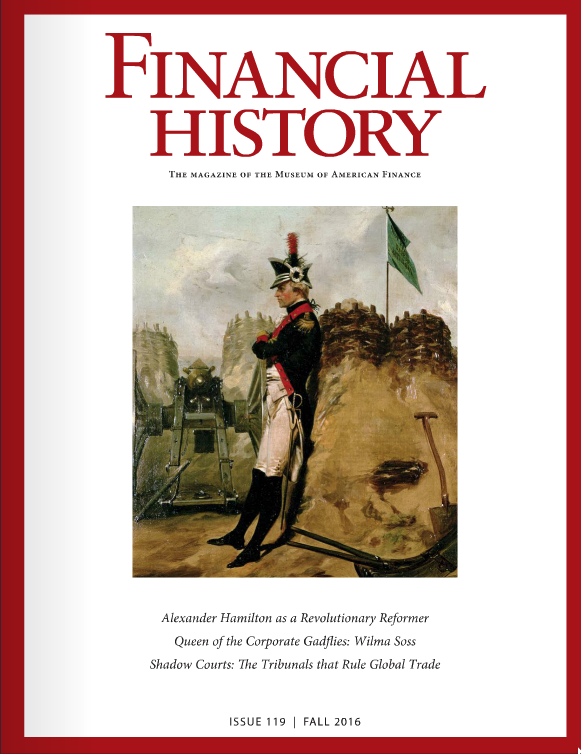 With activist investor Nelson Peltz of Trian Partners making an intense and expensive play for a seat on the board of troubled Proctor & Gamble, the past six months have witnessed the largest proxy battle, and perhaps the oddest one, in U.S. history. In October, it appeared to be over, as the relieved P&G management declared Peltz to be the loser based on its preliminary count of proxy votes.

The drama, however, took an unusual turn in November when Peltz announced that an independent vote count revealed that he indeed had won a seat on the board, albeit by the thinnest of thin margins. Whether Peltz truly succeeded in winning the battle will undoubtedly be hotly contested by P&G. But whatever happens, it is worthwhile at this juncture to put the Peltz play in some historical perspective. What would Founding Father Alexander Hamilton and pioneer “corporate gadfly” Wilma Soss think about the P&G proxy fight?

Alexander Hamilton was much more than just the inspiration for a popular Broadway musical. In addition to the crucially important fiscal and monetary policies he implemented as America’s first treasury secretary, Hamilton also played a seminal role in the development of the American corporate sector by writing several bank and manufacturing company charters. Most famously, he espoused a “prudent mean” voting rule that reduced the number of votes that large stockholders could cast in corporate elections below the “one share, one vote” rule that later became the standard.

Under a Hamiltonian prudent mean voting rule, Peltz would not have been able to challenge P&G’s management. But Hamilton would have been appalled that P&G’s management was involved in the election at all. In the Hamiltonian system of corporate governance that prevailed in America during the eighteenth and nineteenth centuries, boards selected managers, not the other way around. Boards represented stockholders, the corporation’s lawful and moral owners, and were responsible for hiring managers.

Under the Hamiltonian system, managers were encouraged to own stock, and to vote it (under prudent mean voting rules), but they were not supposed to collect proxies and vote in their own slate of directors. Such a reversal of the natural order of things, Hamilton knew, would allow managers to self-deal, leading to corporate accounting scandals and inefficiently high manager compensation.

More than a century and a half after Hamilton’s untimely death in a duel in Weehawken, New Jersey, corporate activist Wilma Soss came to national prominence for her role standing up at corporate meetings to protect the interest of small investors from some of the same corporate governance problems such as excessive executive compensation that Hamilton presciently foresaw. Unlike billionaire Nelson Peltz, Soss was herself a small investor, often owning only a handful of shares in a company she was targeting with her ire.

In mid twentieth century America, Soss and fellow “corporate gadflies” such as the Gilbert brothers typically did not seek a massive personal windfall from their activist agendas; they hoped that their reforms, if executed, would benefit a broad swath of shareholders, including themselves. True, due to her fame on the gadfly circuit, eventually Soss would go on to be a successful radio commentator on NBC on financial matters with her show Pocketbook News. Yet she went to her grave not having made a fortune from her work trying to goad corporate reform. She was passionate about her causes, not the money.

In 1954, Soss became involved in what would be one of the largest proxy fights ever—the fight for control over the underperforming New York Central Railroad. Soss did not start the proxy fight for control over who would run New York Central Railroad, but she saw its value. In the “war” that ensued, both sides—the entrenched management and Robert R. Young, then president of the Chesapeake and Ohio Railroad–would need the votes of little shareholders like herself. At the time, in the 1950s, retail investors, not institutions, still dominated the stock market, and New York Central had many small investors.

A public relations expert, Soss admired the persuasive way Young marketed to small investors to encourage them to vote for his side. Among other promises, Young pledged that he would favor cumulative voting and also that stockholders would not have to later reimburse a winning candidate for expenses accrued in board contests. Wooed by Young, Soss ultimately supported him in the battle, only to be bitterly disappointed when Young reneged on some of his key promises after he won.

Many today debate about what a Nelson Peltz win will ultimately mean to P&G management and the company’s shareholders. Peltz has gone out of his way to emphasize his “friendly” intentions, and unlike Young, he has expressed no desire to replace the CEO (or the directors, for that matter). In the past, though, when Peltz has not gotten his way with his desired changes, he has pressed aggressively for such drastic action as replacing the CEO or, in some cases, even selling off parts of the company.

Neither Hamilton nor Soss believed that shareowners should run the day-to-day operations of corporations any more than they thought that individual voters should directly run the offices of government. Instead, in both instances they wanted a group of stakeholders to select individuals for service on a deliberative body that would protect their interests by setting strategic goals and hiring people to carry out those goals. They envisioned governance rules as checks against potentially rapacious executives, people with incentives to overpay themselves, involve the organization/country in unnecessary conflicts, backdate options (which existed even in Hamilton’s time), and so forth.

In short, the details of “the battle for P&G” would not concern Hamilton and Soss so much as the flawed context in which the battle occurred would. Stockholder/shareowners, be they individuals or amalgamations of capital, should have sole control over the annual election of a board of directors tasked with hiring managers and delegating responsibilities to them. It used to be that simple, and it could be again.

Janice Traflet is Howard I. Scott Research Professor of Management at Bucknell University and the author of A Nation of Small Shareholders as well as numerous articles on Wall Street history.

Robert E. Wright is the Nef Family Chair of Political Economy at Augustana University and the author of Corporation Nation and 18 other books on U.S. economic and financial development and policy.

Publisher’s Note: I reformatted the post slightly, added the links and graphic, as well as the ad, tags and social media buttons below. Link to The Magazine of the Museum of American Finance issue (graphic above) with fascinating articles on both Alexander Hamilton and Wilma Soss – ‘Queen of the Corporate Gadflies’ by Janice Traflet and ‘Our Whole System is in Disorder’ by Richard Sylla. While you are there, sign up for a free subscription to have this great magazine delivered to your inbox.