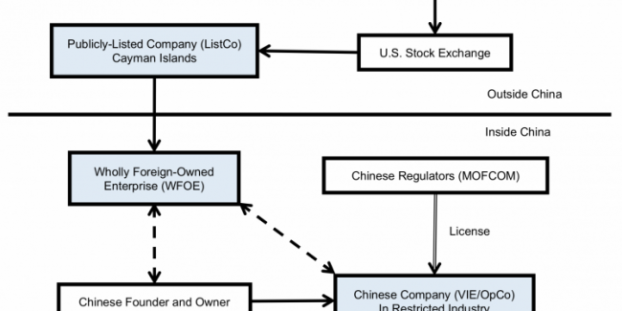 A new report from the Council of Institutional Investors (CII) underlines the risks posed to investors by a corporate structure called a variable interest entity (VIE). Sixty two percent of Chinese companies listed on U.S. stock exchanges use a VIE, including internet giants Sina, Baidu, Alibaba and JD.com. U.S. exchanges are experiencing a surge of Chinese VIE IPOs, with 20 filings this year, including 15 since September 1, compared to six in 2016 and seven in 2015.

Chinese companies using VIE structures have made a splash in the U.S. market and elsewhere, but investors should be aware that VIEs lack legal protections that investors normally expect.

I visit China fairly frequently. It is a dynamic economy. It is tempting to invest in their many quickly growing companies. However, their typical VIE structure offers far few rights to investors than even controlled companies like Facebook and Alphabet. At US companies, even if shareholders have little or no say through votes, at least we have the courts. Personally, I have chosen India over China because companies there typically offer better shareholder rights.

What is a VIE? The Chinese government restricts Chinese companies in certain industries from receiving foreign investment. To sidestep these regulations, companies seeking foreign capital have adopted the VIE structure by constructing a complex network of entities, one of which is an offshore shell company that conducts an IPO on a U.S. exchange. The operating company remains technically owned by Chinese nationals, not foreign shareholders, since the entities are connected through contractual arrangements rather than direct ownership.

Investors in companies with VIEs do not own equity in the Chinese company’s operations. Because the contracts are designed to evade foreign investment restrictions, they might be invalid under Chinese contract law. As a result, investors are left without any real right to residual profits, control over the company’s management or legal protections and recourse they would ordinarily enjoy through equity ownership.

The report concludes by offering five recommendations to the SEC on how to improve transparency and accountability to shareholders of Chinese companies using VIEs by strengthening disclosure rules.

Given the action on Snap that resulted in banning dual-class shares from future listing on the S&P 500, maybe CII and others should attempt a similar ban of VIEs from S&P’s international indexes. Follow CII in Twitter @CouncilInstInv.