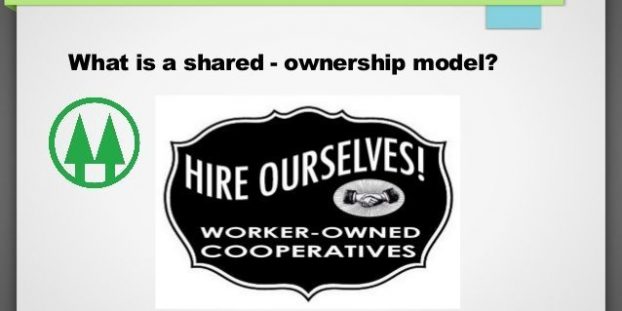 What is driving this wave of activity? These efforts speak to growing dissatisfaction with the economic status quo in America. During the 2016 election, both Donald Trump and Bernie Sanders espoused populist themes, championing the interests of everyday people over those of elites. Populist politics have a long history in the United States, but the current version encompasses a range of economic concerns – including dissatisfaction with how economic gains are distributed to various groups of Americans and criticisms of the inordinate sway of multinational investor-owned corporations. Shared ownership models can speak to such concerns.

Historically, tax and social policies that redistribute resources have been used to respond to concerns about the unequal distribution of economic gains. Touted under the banner of “economic democracy,” shared ownership is an alternative way to address such concerns. Though this term is nearly a century old, interest in economic democracy has increased significantly since the 2009 global financial crisis. In the 1980s, the political scientist Robert Dahl, an early academic advocate, argued political democracy was unsustainable without economic democracy – which he defined as workers having input, control, and ownership of their economic lives, just as they ideally exercise ownership of politics in a democratic country. In his view, cooperatively-owned businesses were the best path for workers to attain this control.

Practicing economic democracy typically means setting up businesses to give workers and other community stakeholders a controlling ownership stake. Similar goals can be furthered by other kinds of shared ownership models – such as credit unions and multi-stakeholder cooperatives. Most of these arrangements are not new. Cooperatives, for example, go back more than 150 years. Furthermore, democratic economic ownership has a proven history of success. Shared ownership has been an essential component of the redevelopment of the Dudley Street neighborhood in Boston, to mention one example. And employee ownership in U.S. firms has been shown to enhance morale and productivity and reduce rapid turnover of employees that requires constant effort to hire and train replacements.

Technological innovations contribute to the push for new ownership models in the economy – by connecting and empowering networks of advocates and policymakers that promote new models and by opening up new opportunities for cooperative decision-making.

A Red and Blue Cause, Advancing from City to State to Country

Individual U.S. states have long functioned as “laboratories of democracy,” where policies can be tested before nationwide deployment. Similarly, states can offer their cities authority to experiment with reforms. At both the state and local level there are opportunities to test policies that promote shared ownership models and energy cooperatives that promise to address populist dissatisfaction with the way American economic gains are currently distributed.

Cities and states can test:

Such measures have gained traction not only in liberal cities like Boston, Massachusetts and Oakland, California, but also Cleveland, Ohio; Richmond, Virginia; and Rochester, New York. Rural electric and agricultural cooperatives have historically been organized in otherwise conservative locales. Employee stock ownership plans typically enjoy support from people with centrist or conservative views, yet they offer some of the same ownership benefits as worker cooperatives, which are typically promoted by people on the left.

Going forward, the challenge for Americans will be to craft local, state and federal policies that enable shared ownership arrangements to grow, thrive, and scale up. Although employee stock ownership plans already have support from federal legislation, legal supports for worker and multi-stakeholder cooperatives vary from state to state. Despite the confusion such variation causes, waves of state and local experimentation are sure to proceed. Whether experiments lead to national breakthroughs that address growing anger at economic injustice remains to be seen.

Publisher’s note: I shortened the original title, added the graphic, a few links, the ad and social media links below.