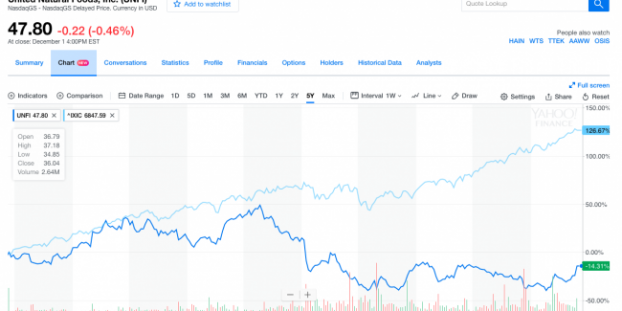 $UNFI, United Natural Foods, Inc. distributes natural, organic, and specialty foods and non-food products in the United States and Canada. The company operates through three divisions: Wholesale, Retail, and Manufacturing and Branded Products. $UNFI opposes giving shareholders effective rights to allow shareholders to call a special meeting and opposes putting change-in-control agreements to a shareholder vote.  Without such changes, $UNFI is likely to continue to lag the Nasdaq, as it has done for the last one, two and five year time periods. (See 5-year returns above.)

Most shareholders don’t vote because reading through 75 pages of the proxy AND many more pages of appendices are not worth the time for the small difference your vote will make. Below, I tell you how I am voting and why. If you have read these posts related to my portfolio for the last 22 years and trust my judgment (or you don’t want to take the time to read it), go immediately to see how I voted my ballot. Voting will take you only a minute or two and every vote counts. The annual meeting is coming up on December 13, 2017. I voted with the Board’s recommendations 50% of the time.  Read Warnings below.

What follows are my recommendations on how to vote the proxy in order to enhance corporate governance and long-term value.

From the Yahoo Finance profile: United Natural Foods, Inc.’s ISS Governance QualityScore as of November 1, 2017 is 1. The pillar scores are Audit: 2; Board: 3; Shareholder Rights: 1; Compensation: 2.

Egan-Jones considers directors, such as those with 10 years or more on the Board as “affiliated” and, therefore should not be serving key board committees. On that basis, they recommend a withhold vote against Peter A. Roy. They also vote against these holding combined CEO/Chair positions (Steven L. Spinner). I find those interesting policies but am not quite ready to embrace. Maybe in 2018 or at specific companies. However, I do embrace their recommendation to vote against (withhold) members of the compensation committee when voting against the compensation package. I voted against $UNFI nominees Eric F. Artz, Ann Torres Bates, and James P. Heffernan.

$UNFI’s Summary Compensation Table (p. 44) shows the highest paid named executive officer (NEO) was Chairman/CEO Steven L. Spinner at $14M. I’m using Yahoo! Finance to determine market cap ($2.4B) and I am roughly defining large-cap as $10B, mid-cap as $2-10B, and small-cap as less than $2B. $UNFI is a mid-cap company. According to the Equilar Top 25 Executive Compensation Survey 2015, the median CEO compensation at large-cap corporations was $5.3 in 2014, so pay was well over that amount. $UNFI shares substantially underperformed the S&P500 over the most recent one, two, and five year time periods.

Egan-Jones Proxy Services takes various measures to arrive at a proprietary rating compensation score, which measure wealth creation in comparison to other widely held issuers. “Needs Attention” is their rating given on compensation issues for $UNFI. Egan-Jones concludes:

Given above median pay, poor relative performance and the recommendation Egan Jones, I voted “AGAINST” the say-on-pay item.

From E-J: After taking into account the maximum amount of shareholder equity dilution this proposal could cause, as well as both the quantitative and qualitative measures outlined below, we believe that shareholders should not support the passage of this plan as proposed by the board of directors. We recommend the board seek to align CEO pay more closely with the performance of the company and work to reduce the cost of any similar plan that may be proposed in the future. Therefore, we recommend a vote AGAINST this Proposal. Agreed.

This proposal is from the Teamsters. I agree with them that requiring shareholder ratification of “golden parachute” severance packages with a total cost exceeding 2.99 times an executive’s base salary plus bonus will provide valuable feedback, encourage restraint, and strengthen the hand of the Board’s compensation committee. According to E-J, “After evaluating the details pursuant to the shareholder proposal and in accordance with the Egan-Jones’ Proxy Guidelines, we recommend a vote FOR this Proposal.” I Voted For.

This is my proposal, so of course, I voted FOR. Shareholders with 25% of common shares can currently call a special meeting. Our proposal would lower that to 15%. (That’s 5% above Delaware’s 10% provision in statute. A shareholder right to act by written consent and to call a special meeting are two complimentary ways to bring an important matter to the attention of both management and shareholders outside the annual meeting cycle. Both are associated with increased governance quality and shareholder value. Our Company offers no right of shareholders to act by written consent. Additionally, the relative dependency on sales to Whole Foods Market leaves our Company more vulnerable to possible changes. Vote FOR.


CorpGov Recommendations: Votes Against Board Positions in Bold

In addition to Trillium and CBIS votes reported by Proxy Democracy, Proxy Insight reported the votes of that Canada Pension Plan, Calvert, Texas Teachers and Australia’s Local Gov Super. All voted against the compensation package (#3) and for both shareholder proposals. (#6 & #7) My recommended votes that differ from what the Board recommends are noted in bold.

Any proposal that a stockholder wishes to be considered for inclusion in our proxy statement for the 2018 Annual Meeting of Stockholders must be submitted to our corporate secretary, Joseph J. Traficanti, at 313 Iron Horse Way, Providence, Rhode Island 02908, no later than the close of business on July 6, 2018. We strongly encourage stockholders interested in submitting a proposal to contact legal counsel with regard to the detailed requirements of applicable securities laws. Submitting a stockholder proposal does not guarantee that we will include it in our proxy statement.

Be sure to vote each item on the proxy. Any items left blank are voted in favor of management’s recommendations. (See Broken Windows & Proxy Vote Rigging – Both Invite More Serious Crime). I generally vote against pay packages where NEOs were paid above median in the previous year but make exceptions if warranted.

According to Bebchuk, Lucian A. and Grinstein, Yaniv (The Growth of Executive Pay), aggregate compensation by public companies to NEOs increased from 5 percent of earnings in 1993-1995 to about 10 percent in 2001-2003. Few firms admit to having average executives. They generally set compensation at above average for their “peer group,” which is often chosen aspirationally. While the “Lake Woebegone effect” may be nice in fictional towns, “where all the children are above average,” it doesn’t work well for society to have all CEOs considered above average, with their collective pay spiraling out of control.

We need to slow the pace of money going to the 1% if our economy is not to become third world. The rationale for peer group benchmarking is a mythological market for CEOs. For more on the subject, see CEO Pay Machine Destroying America.