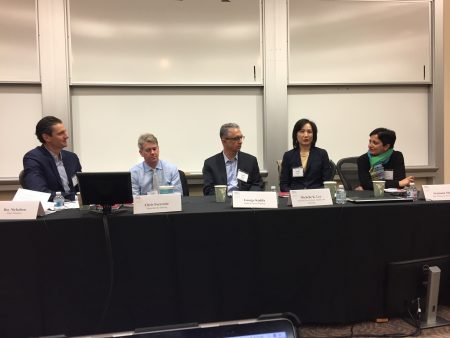 Robotics and AI: How will Boards Embrace Tomorrow’s Technologies?

As advertized: AI and Robotics are coming. There is no question that disruptive technologies are going to dominate not only what is introduced into the marketplace but also how our businesses are operated internally. Two evolving, and already disruptive forces, are robotics and artificial intelligence (AI).  From the Board’s viewpoint, how do you get smart on these topics and understand their value to you? What are the implications of enabling a digital workforce within organizations? Are their opportunities for the governance process itself to leverage these technologies? Could you soon be joined in the Boardroom by an AI Bot? The future is already here at some boards.

Roy Nicholson, Principal, Advisory Services, Grant Thornton. Based in Silicon Valley, Roy Nicholson is a principal at Grant Thornton LLP’s Advisory practice. He is a leader within the Technology Strategy and Management practice with a focus on Digital Transformation.

Michelle K. Lee, Visiting Professor, Stanford Law School; Director, Alarm.com Holdings; Former Director, U.S. Patent & Trademark Office and Former Undersecretary of Commerce for IP. Michelle K. Lee is a proven leader at the highest levels in technology, law, business and government. She has spent most of her professional career advising some of the country’s most innovative companies and brought that expertise as she led America’s innovation agency.

Robotics and AI: My Notes

Below are a few of my cryptic notes from this Rock Center / SVDX event introduced by Amanda Packel of the Rock Center and Gordon Yamate of SVDX. Their events operate under the Chatham House Rule, so no direct quotes. 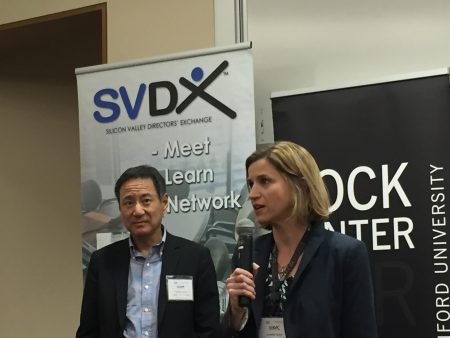 One of the more interesting implications of AI that has been too little recognized is its use for discovery in shareholder and other lawsuits. With so much more being recorded, powerful computers can quickly pore over millions of e-mails and reams of data. Everyone is doing AI at an aggressive scale.

Liability issues are wide open with AI, since the machine learned. The programmer did not tell it to do that… the AI learned to do it. Can you really trace back where the decision came from and assign liability?

Those at the middle and bottom of the pyramid are challenged re economic viability. Issues of augmentation or intellectual capacity will soon arise. Social media can be dangerous for creating unrest. AI for a first pass at the data. Smart contracts are a tool. Smart contracts will automatically perform validation steps and encode the conditions of a physical contract. They will be use by sales force to voice inputs and get hypothetical results right away. Cybersecurity vastly AI. Media buying is becoming nearly all logarithmic.

40% of jobs will be redundant in 10 years but panelists did not agree on the outcome. First we will be replacing the more mundane jobs. How is the management team handling upgrades? Is appropriate notice to the employee base? Are we treating workers respectfully? Few of us are farmers but we still have jobs. Same with manufacturing and service industries. What level of retraining is viable?

Retraining is critical but whose job will it be? If a company does not need most of its workers, should they be responsible for retraining laid off employees for jobs at other firms? There is a growing movement for “constituent corporations” that accept some responsibility to their workers. But maximizing profits is the normal maxim and I see many more moving to the gig economy that leaves workers to fend for themselves.

Automatic programming will put many out of work. Mortgage lending firms are having immersive discussions. Take your board to CES. How will AI influence the board process? ‘Alexa, tell me the last five lawsuits filed and their potential risk to our company.’ Almost four years ago a Hong Kong VC put an AI program called VITAL on its board as a nonvoting robot director. Keep in mind directors cannot legally delegate their responsibility to an AI robot.

Makeup of boards changing to add millennials. More tech people. Their insights are necessary going forward because of their level of familiarity.  Robot taxes, universal basic income; where will the solutions come for the unemployed? The Obama White House released a report on Artificial Intelligence, Automation, and the Economy. That report followed up on the Administration’s previous report, Preparing for the Future of Artificial Intelligence.

Accelerating AI capabilities will enable automation of some tasks that have long required human labor. These transformations will open up new opportunities for individuals, the economy, and society, but they will also disrupt the current livelihoods of millions of Americans. The new report examines the expected impact of AI-driven automation on the economy, and describes broad strategies that could increase the benefits of AI and mitigate its costs…

AI developments can only be addressed through public private collaboration. People will still need purpose and meaning in life. Education must bring out our innate talents and gifts. Some suggest getting away from the factory model; others see the need for even more vocational education. Where will the new jobs be? Health care could use more people. Education itself could grow. Nonprofit boards owe a duty to donors but they are also obligated to increase efficiencies.

Blackbox of the human mind.  One book recommended by a panelist was The Emperor’s New Mind; Concerning Computers, Minds, and the Laws of Physics. AI works best in constrained domain but humans are not so logical. We were encouraged to celebrate crazy ideas.

Which would you rather have, a human doctor or an AI doctor? Best to have a doctor assisted by AI. What if the doctor overrides the AI? Do they face additional liability? How are algorithms updated? Same standards for updated certification. Surveillance of individuals. Hacking. Elections influenced. Boardrooms also can be hacked. EU may lead in the regulation of robots and AI.

Check out The Future of Everything from the Nov/Dec 2017 WSJ, as well as the podcasts. ATMs were discussed. Yes, they put a lot of tellers out of work but banks then employee more “banking representatives.” AI will be used to augment human capacity.

Reliance on AI for duty of care could be a trap. Look at the assumptions. The standard is gross negligence. What do you know about the algorithm? All ‘what if’ assumptions would have to be analyzed. Have they done duty of care through due diligence? Board should be asking about data set and relevance to company. Assumptions and completeness of data, secure, how using, authorization, storing, deleting. It is happening now and has huge implications to the workforce.

I thought it was very interesting how two different organizations in the Bay Area covered similar topics. See 2018 CES: Northern California NACD Insights. Both offered great insights. See also Is Artificial Intelligence on Your Board’s Agenda? from Inside America’s Boardrooms.