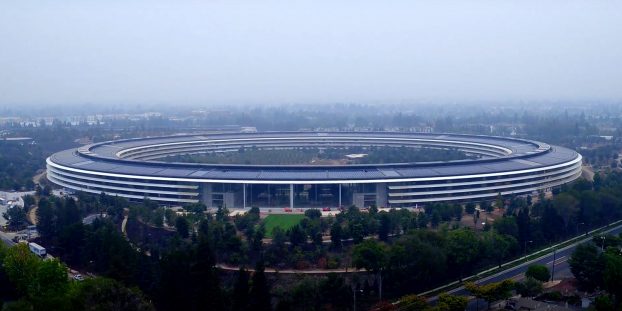 The annual meeting is coming up on February 13, 2018 at the new Apple Park. I voted with the Board’s recommendations 69% of the time. I voted against the pay package. I voted for proxy access amendments and for a human rights committee. View Proxy Statement via SEC’s EDGAR system (look for DEF 14A).

Most shareholders don’t vote because reading through almost 100 pages of the proxy and appendices aren’t worth the time for the small difference your vote will make. Below, I tell you how I voted and why. If you have read these posts related to my portfolio for the last 22 years and trust my judgment (or you don’t want to take the time to read my full post), go immediately to see how I voted my ballot. Voting will take you only a minute or two and every vote does count.

From the Yahoo Finance profile: Apple Inc.’s ISS Governance QualityScore as of January 1, 2018 is 1. The pillar scores are Audit: 1, Board: 1, Shareholder Rights: 1, Compensation: 6.

I voted with the Board on all directors. However, I note that Egan-Jones recommended voting against Art Levinson, who has been on the board since 2000, and Al Gore, who has been a director since 2003. I agree, directors tend to lose their independence after many years of service.

Apple’s Summary Compensation Table shows the highest paid named executive officer (NEO) was Senior Vice President of Retail Angela Ahrendts at $24.2M. Note 5 out of the 6 NEO’s had pay around $24.2M. The 6th, Tim Cook, makes up for it with more stock. I’m using Yahoo! Finance to determine market cap ($887B) and I am roughly defining large-cap as $10B, mid-cap as $2-10B, and small-cap as less than $2B.  Apple is a large-cap company. According to the Equilar Top 25 Executive Compensation Survey 2015, the median CEO compensation at large-cap corporations was $10.3M in 2014, so pay was well over that amount, even considering inflation.  Apple shares underperformed the Nasdaq over the most recent one, two, and five year time periods… although if I had taken the measure a few days ago, they probably would have matched or exceeded.

I see on Proxy Democracy Trillium Asset Management voted against the compensation package, in part, because it is “greater than 150 times national median household income.” I voted against the pay package. Pay on that level contributes to social inequality leading to all kinds of maladies.

Egan-Jones Proxy Services takes various measures to arrive at a proprietary rating compensation score, which measures  wealth creation in comparison to other widely held issuers. “Needs Attention” is their rating given on compensation issues for Apple. Egan-Jones concludes:

Given far above median pay, I voted “AGAINST” the say-on-pay item.

From Egan-Jones: The Non-Employee Director Stock Plan does not currently limit the amount of annual compensation paid to a Non-Employee Director for service on the Board. The proposed amendments provide for an annual limit of $1.5 million for all compensation paid to a Non-Employee Director, including the value of annual equity awards, cash retainers, and other compensation. “We believe that approval of this proposal will help the Company to attract, retain and motivate its directors whose efforts are essential to its success. We recommend a vote FOR this Proposal.”  I guess some limit is better than no limit. I voted FOR. What about taking the same concept and limiting executive pay to some upper limit, like $15M annually?

This proposal from me (James McRitchie) deserves support. Apple has adopted a ‘lite’ version of proxy access. Our proposal seeks a more robust version based on the SEC’s vacated Rule 14a-11 and CII’s Best Practices. The vast majority of proxy access bylaws adopted by Fortune 500 companies allow shareholders to nominate at least two directors, whereas Apple’s bylaws allow for only one nominee. One nominee could be easily isolated. See my extensive critique at Apple’s Proxy Access Lite Needs Changing. Vote FOR. Egan-Jones also recommended FOR.

This proposal is from another retail shareholder, Mr. Jing Zhao. Egan-Jones recommended against but as Calvert writes,

The creation of a human rights committee, as requested, should serve to further strengthen Apple’s commitment to universal human rights as well as augment its existing human rights-related oversight mechanisms; and- The establishment of a human rights-focused board committee should not be unduly burdensome and should enhance and complement the company’s capacity to manage human rights risks in the long-term, for the ultimate benefit of shareholders.

In addition to Calvert, Trillium and CBIS votes reported by Proxy Democracy, Proxy Insight reported Texas Teachers (below), which voted for both shareholder proposals, and Canada Pension Plan, which voted for #5 but against #6. By 2/12, 10 institutional investors had announced their votes. ALL voted in favor of #5.  My recommended votes that differ from what the Board recommends are noted in bold. Yes, I’m voting a little more against the Board than most but I want to send a real signal. Join me.

Proposals and director nominations must be sent either by mail to Apple’s Secretary at 1 Infinite Loop, MS: 301-4GC, Cupertino, California 95014, or by email to shareholderproposal@apple.com. Matters for inclusion in the proxy materials for the 2019 annual meeting of shareholders must be received on or before August 29, 2018. All proposals must comply with Rule 14a-8 under the Exchange Act.