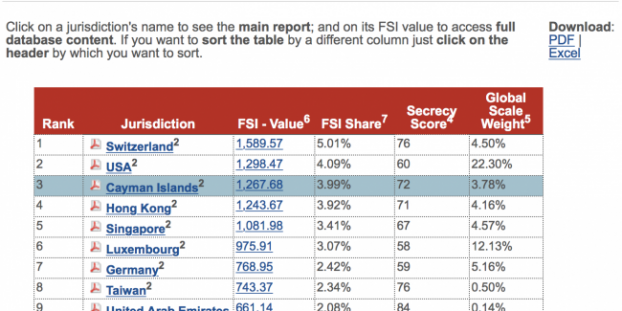 The United States has become the second largest tax haven in the world. That’s according to a new report published Tuesday by the Tax Justice Network (TJN), partnering with the FACT Coalition.  TJN’s 2018 Financial Secrecy Index (FSI) finds the U.S. has surpassed the Cayman Islands. Now we are the second largest secrecy jurisdiction, next to Switzerland.  TJN partnered with Transparency International and the Financial Accountability and Corporate Transparency (FACT) Coalition. They held an event in Washington on Tuesday afternoon. I would love to see the FACT Coalition follow up with research on how this corruption impacts corporate governance and civil society.

“This is not a ranking in which the U.S. wants to be number one or even number two. However, that is our place.  We have one of the strongest economies and one of the most secret.  It’s a perfect recipe for attracting the proceeds of crime, corruption, and tax evasion.  Internationally, this secrecy facilitates corruption that drains wealth from developing countries.  And we are fueling an austerity movement here at home.

“Our role and lack of global leadership on these issues also hurts us by enabling the larger tax haven industry.  Legislators talk about the federal deficit, and they battle over raising revenue and cutting programs. What about addressing the more than $100 billion that is lost each year to money shifted offshore, much of it through the use of anonymous companies, to cover both illegal tax evasion and questionable tax avoidance practices?

“It’s also time we are absolutely clear on the far reaching dangers of secrecy and stop talking about this as if it were an abstraction.  The opioid crisis and human trafficking are both on the rise with the help of anonymous shell companies to launder the proceeds.  As we consider economic sanctions for North Korea, we can’t ignore how Iran evaded our earlier sanctions by establishing an anonymous company in New York and purchasing a skyscraper in Manhattan.

“This report is the latest evidence that policymakers should move forward with sensible measures to end the abuse of anonymous shell companies, increase transparency around where multinational companies pay taxes, and engage constructively in international financial transparency initiatives.”

FACT Coalition: Easier to Form a Company Than Get a Library Card

Terrorists, narco-traffickers, arms dealers, corrupt foreign officials, tax evaders, and other criminals easily and regularly set up U.S. shell companies, without providing any information about who owns or controls such companies, to launder their criminal money in the United States or use that money to further their criminal activities, like buying precursor chemicals.  A 2012 academic study revealed that the United States is the second easiest place in the world—after Kenya—for a criminal or terrorist to open an anonymous shell company to launder their money.