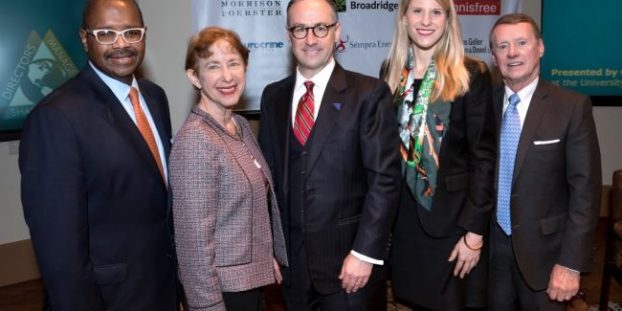 Culture impact in corporate governance got a big boost with NACD Blue Ribbon Commission report Culture as a Corporate Asset. A brave panel tackled the topic, The Culture Impact: Values, Attitudes & Strategic Directions, at the Corporate Directors Forums I attended in San Diego. Like all Corporate Directors Forums, this one operated under the Chatham House Rule, so you will not find any direct quotes below. These are my notes on The Culture Impact. As such, they include my opinions as well observations made by speakers, panelists and others in attendance at the Forum. This is certainly not a transcript. However, I hope even those who attended the Forum will find the post useful, especially my attempt to provide additional context through links and commentary.

To learn more about the 13th annual Directors Forum: Directors, Management & Shareholders in Dialogue conference, click on the following: @corpdirforum on Twitter, tweets from #CorpDirForum2018 that often link to other posts, #corpgov #boards website, and Linkedin.

The Culture Impact: My Notes

Paper forthcoming on Wells Fargo and Uber by Hanna Grene and Bryan Cornwall to be published on Equilar website. I will be waiting with anticipation. How would we react? What tools do we have available? It seems to me, the problems were an open “secret,” not unlike Harvey Weinstein.  The basics of the Wells Fargo scandal were reported in the LA Times in 2013. Los Angeles sued in 2015. The Board didn’t issue their own internal study until April 2017. Too little, too late with Federal Reserve placing the first firmwide limit on a bank as Chair Janet Yellen stepped down. Wells Fargo announced concurrently that it would replace 4 board members, three by April. Wells Fargo will be included in case studies on culture impact for years to come.

Similarly, Uber’s “hard charging” workplace environment was hardly a secret and had adverse corporate culture. Culture was key. Uber was (is?) aggressive and overbearing. Whereas founder Travis Kalanick’s motto might have been something like, “get it done,” the new CEO Dara Khosrowshahi has adopted ‘We do the right thing. Period.’ Media impact was huge reason for change. We see the influence of media, especially social media, even more after the latest mass shooting. (Mass shootings have made gun stocks toxic assets on Wall Street)

Renee Aggarwal, Isil Erel and Laura T. Starks, Influence of Public Opinion on Investor Voting and Proxy Advisors (August 6, 2014, Georgetown McDonough School of Business Research Paper No. 2447012; available at SSRN) found that investors have been “voting less with the recommendations of management or proxy advisors.” In contrast,

public opinion on corporate governance issues, as reflected in media coverage and surveys, is strongly associated with investor voting, particularly mutual fund voting. In addition, even proxy advisor’s recommendations are associated with public opinion… media coverage captures the attention of proxy advisors, institutional investors and individual investors, and is thus reflected in recommendations and votes.

The researchers looked at each proxy proposal for each firm in the Russell 3000 Index for the period January 2004 through November 2010. They looked not only at voting records and ISS recommendations but also media coverage of executive compensation, as well as Gallup surveys of public opinion.

A few highlights from their research are as follows:

Our results suggest that public opinion, as measure through either Gallop Poll survey or media coverage at the aggregate and firm level, influences shareholder voting. The implications of these results are that financial intermediaries, such as mutual funds, pay attention to the shareholders’ preferences regarding corporate governance. These results hold even after controlling for the recommendations of the proxy advisor.

The Culture Impact: Back to Conference Notes

Executives sometimes make it known they did not want negative feedback. How do directors make changes before a negative story appears on the upper fold of a major newspaper?

If you are a high performer, culture impact may be nonexistent for a while; you can do anything you want. But the buck stops at the board, not the CEO. The board needs to be willing to second guess. The board needs to wonder about what you do not know. The board should insure it has independent sources of information. Some argue they have their own independent staff. Activists often do, and they often turn out to be good board members in part because of those additional resources.  Every board member should have a responsibility to visit branches, have many experiences as a customer or user. Uber board members seem to have been blind-sided with rapid growth. They waited to long to go after the CEO. Mandatory unconscious bias training might have helped.

The NACD Blue Ribbon report has many tools. Regulatory or the courts; markets or self-reflection. Unfortunately, too often boards seem to be wearing blinders. We are unlikely to see regulatory reform on culture impact. Pressure seems more likely from major shareholders like BlackRock’ announcement to gunmakers. Shareholders have the ability to push back. They have the right to vote boards off the island. Larry Fink’s letter this year said companies must have “a sense of purpose.” Companies have culture impact.

Furthermore, the board is essential to helping a company articulate and pursue its purpose, as well as respond to the questions that are increasingly important to its investors, its consumers, and the communities in which it operates. In the current environment, these stakeholders are demanding that companies exercise leadership on a broader range of issues. And they are right to: a company’s ability to manage environmental, social, and governance matters demonstrates the leadership and good governance that is so essential to sustainable growth, which is why we are increasingly integrating these issues into our investment process.

Your vote is really important. At Wells Fargo and Uber we saw a failures of courage. Uber had frat boy culture. Culture, character and courage… that is what it takes. Wells Fargo seems to have had a culture of, ‘cheat and you can stay; don’t cheat and you are fired.’ Boards need to be more transparent around reports and actions taken, not just to reduce potential liabilities but also to help your company live up to its purpose.

Investigations must be reported up. HR should number and track complaints so they do not get lost. Boards should get routine reports to assess culture impact — to see trends and outliers. Boards should seek the right answers. Non-financial measures should be to be tied to compensation. In an M&A, which culture will prevail? Which culture to keep.

The role of HR. Is it to protect the company or to protect and develop employees? Heads of HR should address boards more frequently. Directors have to spot the data anomalies. Culture is important and is part of their fiduciary duty.