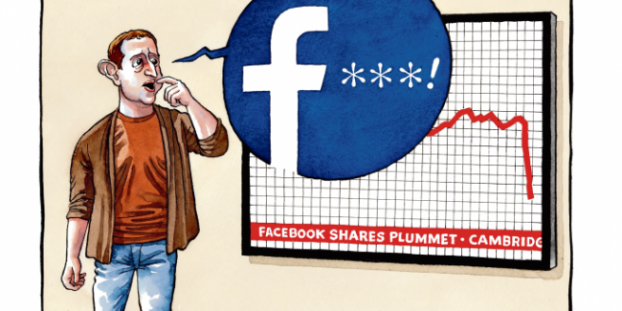 As Mark Zuckerberg comes to terms with his latest public-relations disaster, he has made some interesting admissions. One is that the Facebook CEO feels “fundamentally uncomfortable sitting here in California in an office making content policy decisions for people around the world,” as he told Recode. This sentiment echoes his manifesto on the future of Facebook from earlier this year, in which he called for “a system of more local governance,” for the same reason: He can’t figure out by himself how to set standards of behavior for Facebook’s more than 2 billion monthly active users.

It’s a sensible realization, and it wouldn’t be surprising if it came from anyone but Zuckerberg. This is the person, after all, who has managed to structure his company so as to retain monarchic powers despite being a minority owner. This is the company whose leading shareholders allowed that to happen. How would a company whose shareholders don’t even trust themselves ever enable meaningful user governance?

The current crisis of trust for Facebook should be a wake-up call that the tech giant—and others like it—need more appropriate structures of ownership and accountability.

Most of the talk about how to handle Facebook’s vast troves of valuable personal user data has revolved around regulation. Mark Zuckerberg, along with Apple’s Tim Cook, have outright invited such oversight, and Europe’s new data protections are forcing them to plan for it anyway. Commentators from Steve Bannon to Zeynep Tufekci have called for Facebook to be treated as a public utility, like power companies and telecoms. Before legal advisors got the better of him, presumably, Zuckerberg himself used to refer to the company as a “social utility.”

Some well-placed rules might do a lot of good. But heavy regulation can also backfire. Think of what our most highly regulated, utility-scale industries look like—Comcast, PG&E, AT&T. Airlines. Big banks. Many of these are among the most hated companies out there. Zealous regulation can result in regulatory capture; a few big firms can afford enough lobbyists to write their own rules, which tend to be are so onerous that they make it impossible for smaller competitors to challenge the incumbents. Regulation thus ends up subsidizing the big firms’ investor-owners and reducing the incentive for providing quality service.

We might also consider whether governments, especially the ones we currently have, can be trusted to protect our personal data. The Department of Justice, for instance, is seeking rules to ensure its ability to access data on encrypted phones; Congress has permitted ISPs to sell their customers’ personal data.

There are other ways to imagine organizing a social network of Facebook’s scale—ways better aligned with Zuckerberg’s ambition of “local governance.” One of the few companies that rivals Facebook’s scope is the Associated Press, the newswire service that claims to reach over half the world’s population every day with its reports. The fact that we tend not to think of the AP in the same breath as Facebook is a signal of its success; the goal of a good platform should be that we don’t notice it.

The AP was formed in the 1840s as an association of New York City newspapers that needed to share resources like telegraph wires and horseback couriers. It has since endured its share of Facebook-like controversy; Upton Sinclair once called it “the most powerful and most sinister monopoly in America.” But a decisive turning point came with a 1945 Supreme Court decision that forced the AP to become a truly open-membership cooperative, owned and governed by the competing news agencies that use it, which run the ideological gamut from Fox News to the New York Times. It provides its member companies—including my local paper—with much-needed reportage from all over the world. In a moment of media polarization, the AP has stuck to the center by virtue of its diverse ownership structure—which is to say, the structure of its accountability.

Calls have been mounting for antitrust action against the new tech behemoths—not only Facebook, but also Amazon, Google, and others. Too rarely do these proposals involve fundamentally changing how the platforms are owned and governed.

One approach, following the AP example, would be to reorganize Facebook into an association of diverse, interoperable social networks among which users could choose. The central company would act as a kind of franchiser, managing the core technology and underlying infrastructure; the smaller member-owner companies would compete for users by offering varied options on matters of ad deployment, data standards, content filtering, and even interface design. Like the internet’s most essential and resilient social network—email—the result would be a blend of unity and diversity. Like AP, also, Facebook would be insulated from the day-to-day economic temptations of the ad business.

The technology for such “federated” social networks has existed for years; the trouble is that the allure of monopolism has so far prevented more competitive models from flourishing.

A second approach might involve a more direct form of user-ownership, in which the company as a whole remains unified but individual Facebook users, together, wield significant ownership and governance powers. This would be especially well-aligned with one of Zuckerberg’s stated ambitions: “I hope that we can explore examples of how collective decision-making might work at scale.” Handling such governance would not be easy, but already large-scale co-ops and mutuals—think REI and Northwestern Mutual—do a fairly good job of serving member interests without being toppled by the fleeting whims of the crowd. The electric utility co-ops that supply electricity to much of rural America receive consistently higher customer service ratings than their investor-owned counterparts. If companies like Facebook are going to hold the data of our daily lives, the surest route to security and a sustainable business is for us to hold a stake in those companies in turn.

The path to either of these outcomes is not easy or clear. They are goals to work toward, not short-term fixes. And achieving them will require a mix of policy intervention and ingenuity. Perhaps the process could begin with Zuckerberg’s promised stock sell-off. One way or another, it is time to look beyond the ownership structures the online economy currently has to the ones we need for a healthier future.

The Cambridge Analytica case now plaguing Facebook is not a hack or a breach; it’s the rule, not an exception. It’s a symptom of a problem we already knew we had but were content to ignore. Facebook, Google, Amazon, and firms like them hold reams of data about us whose potential for abuse—if not now, in the future—may exceed the companies’ incentive to act in our interests. As online networks mature from dorm-room experiments to social utilities, our expectations should mature with them. Even Zuckerberg seems to realize that his network isn’t just his anymore. We give it value by acting like it is ours, by sharing our lives like it is ours. The nature of the company should reflect this.

Nathan Schneider is a professor of media studies at the University of Colorado Boulder. His next book, Everything for Everyone: The Radical Tradition That Is Shaping the Next Economy, will be published by Nation Books in the fall.

Publisher’s Note on Schneider and Zuckerberg

Adding the cartoon is my responsibility. It came from Zuckerberg Scrambles To Calm Facebook Employees, by Tyler Durden. The rest of the post originally appeared in a slightly different format as It’s Time for Mark Zuckerberg to Give Up Control of Facebook on Vice.

I’m delighted to publish Nathan Schneider’s timely article on Facebook’s Mark Zuckerberg. I am among those shareholders perennially filing to change Facebook’s dual class share structure. What is happening is to be expected when user’s have little ability to own and manage our personal data and one person is in unchecked “control.”

Twitter faces similar issues but at least does not have a dual-class structure or one person control. We have many posts on the ongoing campaign at Twitter. See Broad-Based Ownership at Twitter: Academic Perspective, A More Cooperative Based Twitter, BuyThisPlatform: Twitter Explores Co-op Capitalism, and Co-ops, Twitter, Democracy: Coalition Letter. Schneider and I have exchanged many emails on Twitter. I expect his ideas on Facebook will be widely discussed. Comments are welcome.

George Washington stepped down to ensure continued separation or powers for the United States. Zuckerberg now leads a much larger monopoly power. For the sake of democracy and humanity, Zuckerberg must transform Facebook by using a more democratic structure.