GE PX14A6G: Notice of Exempt Solicitation pursuant to Rule 14a-103 reproduced below with minor modifications. Please sign on to our Change.org campaign. Use Real Impact Tracker to ask your fund to vote for Shareholder Proposal 3, “Deduct Impact of Stock Buybacks from Executive Pay” at or before the GE annual meeting. See also SEC ADMITS IT’S NOT MONITORING STOCK BUYBACKS TO PREVENT MARKET MANIPULATION.

We call on GE shareholders to vote FOR shareholder proposal 3, “Deduct Impact of Stock Buybacks from Executive Pay” at or before the GE Annual Meeting on April 25, 2018.

The proposal asks the board of directors to adopt a policy to not utilize “earnings per share” (“EPS”) or financial ratios (return on assets or net assets or equity) in determining senior executive incentive compensation, unless the Board utilizes the number of outstanding shares on the beginning date of the performance period and excludes the effect of stock buybacks that may have occurred between that date and the end of the performance period. This policy is to be implemented without violating existing contractual obligations.

We support performance metrics that align senior executive pay with long-term sustainable growth. However, using EPS ratios to calculate incentive pay at a time it is aggressively repurchasing its shares reduces that alignment, artificially boosting EPS and executive pay.

In addition, research by Robert Ayres and Michael Olenick of INSEAD found “the more capital a business invests in buying its own stock, expressed as a ratio of capital invested in buybacks to current market capitalization, the less likely that company is to experience long-term growth in overall market value.” “GE has repurchased $114.6 billion of its own stock and has, at the end of Q1, 2016, a market capitalization of $253.25 billion, a ratio of 45%.” [Secular Stagnation (Or Corporate Suicide?) https://ruayres.wordpress.com/2017/07/11/secular-stagnation-or-corporate-suicide]

The purpose of the proposal is to reduce the artificial impact of stock buybacks on senior executive pay, since buying back stock is generally correlated with reducing company productivity and artificially boosting pay.

GE’s opposition statement does not address these problems but argues, the proposal would “unduly restrict“ the Compensation Committee’s ability to structure executive compensation arrangements to ensure “alignment” with “shareowners.” However, most shareholders are not the short-term variety GE wants to please. We are concerned with long-term growth and aligning pay with long-term shareholders.

This is a relatively new type of proxy proposal. Many funds and proxy advisors do not have a set policy and say they will attempt to evaluate this and other new proposals on a  “case-by-case approach,” considering factors such as the frequency and timing of the company’s share buybacks, the effect of recent buybacks on metrics utilized in executive incentive programs, and the types of one-time adjustments generally made to those metrics. However, I hope they will take this opportunity to reevaluate that approach. Although the compensation committee and board are generally in the best position to determine the most appropriate incentive metrics and buy-backs certainly can be in the interest of shareholders, it is clear that buybacks do not add value to core business performance. That should be at the heart of pay for performance.

GE executives should be incentivized to make our company more productive, not to goose the stock price temporarily through buy backs to benefit their own pay.

This written material is submitted pursuant to Rule 14a-6(g)(1) promulgated under the Securities Exchange Act of 1934. Submission is not required of this filer under the terms of the Rule, but is made voluntarily in the interest of public disclosure and consideration of important issues. This is not a solicitation of authority to vote your proxy.  Please DO NOT send us your proxy card; the shareholder is not able to vote your proxies, nor does this communication contemplate such an event.

The shareholder urges shareholders to vote FOR “Shareowner Proposal No. 3 — Deduct Impact of Stock Buybacks from Executive Pay” following the instruction provided on management’s proxy mailing. 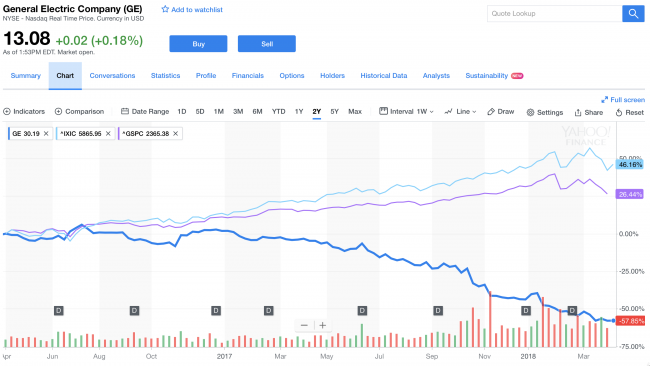 The Many Facets of Risk
NCR Recent Governance Developments