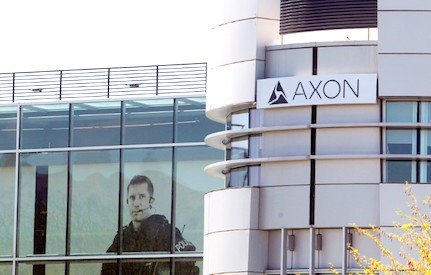 Axon Enterprise, Inc. (AAXN) develops, manufactures, and sells conducted electrical weapons (CEWs) worldwide. Most shareholders do not vote because reading through 60+ pages of the proxy is not worth the time for the small difference your vote will make. Below, I tell you how I am voting and why.

The annual meeting is coming up on May 24, 2018. I voted with the Board’s recommendations 25% of the time. View Proxy Statement via SEC’s EDGAR system (look for DEF 14A).

From the Yahoo Finance profile: Axon Enterprise, Inc.’s ISS Governance QualityScore as of April 1, 2018 is 6. The pillar scores are Audit: 5; Board: 4; Shareholder Rights: 6; Compensation: 4.

Egan-Jones Proxy Services recommends “against” for Ricahard Carmona and Brent Taylor – Carmona because he has served more than 10 years on the Board, so is no longer considered independent; Taylor for attending less than 75% of Board meetings.

I voted AGAINST Carmona and Taylor.

Egan-Jones notes Axon: “should re-evaluate and re-assess its Remuneration Policy regarding CEO performance awards  to ensure that the interests of the key individuals are aligned with the business strategy and risk tolerance, objectives, values and long-term interests of the Company and will be consistent with the “pay-for-performance” principle. Accordingly, we recommend a vote AGAINST this Proposal.”

Axon’s Summary Compensation Table shows the highest paid named executive officer (NEO) was CEO Patrick W. Smith at $3.8M. I’m using Yahoo! Finance to determine market cap ($3B) and I am roughly defining large-cap as $10B, mid-cap as $2-10B, and small-cap as less than $2B. Axon is a mid-cap company. According to the Equilar Top 25 Executive Compensation Survey 2015, the median CEO compensation at mid-cap corporations was $5.3M in 2014, so pay was under that amount. Axon shares outperformed the Nasdaq over the most recent one, two, and five year time periods. Axon did not appear on As You Sow‘s list of the 100 Most Overpaid CEOs. Prior reports have shown that being on that list is correlated with lower returns in subsequent years. However, maybe they did not appear because the company is too small to be covered. Mr. Smith’s annual total compensation is forty-one times (or a ratio of 41 to 1) that of the estimated median compensated Axon employee.

Egan-Jones Proxy Services takes various measures to arrive at a proprietary rating compensation score, which measures wealth creation in comparison to other widely held issuers. “Some Concerns” is their rating given on compensation issues for Axon.

We believe that the Company’s compensation policies and procedures are not effective or strongly aligned with the long-term interest of its shareholders. Therefore, we recommend a vote AGAINST this Proposal.

Given above median pay, the recommendation of Egan-Jones, the vote of Calvert, and my concern with growing wealth inequality,

I have no reason to believe the auditor has rendered an inaccurate opinion, is engaged in poor accounting practices, or has a conflict of interest. However, Egan-Jones notes that Grant Thornton, LLP has been serving as the Company’s auditor for seven years and their independence is compromised.  I also believe that the companies should consider the rotation of their audit firm to ensure auditor objectivity, professionalism and independence. However, I have not set a specific number of years.

E-J recommended against; institutional investors disclosing their votes voted against.

This is my proposal (James McRitchie), so of course I voted For. This good governance proposal simply asks that our Board take the steps necessary to reorganize into one class with each director subject to election each year and to complete this transition within one-year.

It is intuitive that when directors are accountable for their actions, they perform better. We, therefore, prefer that the entire board of a company be elected annually to provide appropriate responsiveness to shareholders. After evaluating the details pursuant to the shareholder proposal and in accordance with the Egan-Jones’ Proxy Guidelines, we recommend a vote FOR this Proposal.

To be eligible for inclusion in the Company’s proxy materials for the 2019 Annual Meeting of Shareholders, a proposal intended to be presented by a shareholder for action at that meeting must, in addition to complying with the shareholder eligibility and other requirements of the SEC’s rules governing such proposals, be received not later than December 14, 2018 by the Corporate Secretary of the Company at the Company’s principal executive offices, 17800 North 85th Street, Scottsdale, Arizona 85255.