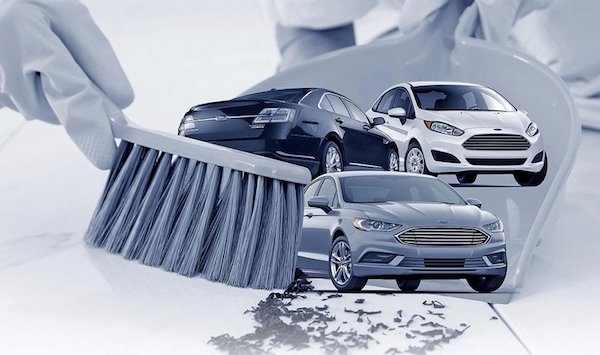 Ford Motor Company (F) designs, manufactures, markets, and services a range of Ford cars, trucks, sport utility vehicles, and electrified vehicles; and Lincoln luxury vehicles worldwide. Placing a big bet on the continued profitability of gas guzzling SUVs and trucks, they recently announced phasing out most sedans. Most shareholders do not vote because reading through 100+ pages of the proxy is not worth the time for the small difference your vote will make. Below, I tell you how I voted and why. If you have read these posts related to my portfolio for the last 22 years and trust my judgment (or you don’t want to take the time to read my rationale), go immediately to see how I voted my ballot. Voting will take you only a minute or two and every vote counts.

The annual meeting is coming up on May 10, 2018. I voted with the Board’s recommendations 52% of the time. View Proxy Statement via SEC’s EDGAR system (look for DEF 14A).

3D Systems Corporation’s ISS Governance QualityScore as of April 1, 2018 is 4. The pillar scores are Audit: 2; Board: 3; Shareholder Rights: 1; Compensation: 10.

Corporate governance scores courtesy of Institutional Shareholder Services (ISS). Scores indicate decile rank relative to index or region. A decile score of 1 indicates lower governance risk, while a 10 indicates higher governance risk. Therefore, we need to pay closer attention to executive compensation. However, with unequal voting, I cannot agree with an ISS Shareholder Rights rating of 1. I would rate it closer to 10, so that is another high concern.

Egan-Jones Proxy Services recommends “For,” with the exception of: 1A) Stephen G. Butler because has have served for more than ten years (with compromised independence) and sits on key committees, which should be composed only of independent directors. Although I agree with the thrust of their arguments, I am not ready to set that as my policy. However, since I agree with E-G’s recommendation to vote against the pay package, I agree with their recommended vote AGAINST members of that committee: 1C) Anthony F. Earley, Jr., 1J) Ellen R. Marram, 1I) John L. Lechleiter, 1K) John L. Thornton

I have no reason to believe the auditor has rendered an inaccurate opinion, is engaged in poor accounting practices, or has a conflict of interest.  However, Egan-Jones notes the auditor has been serving as the Company’s auditor for more seven years and their independence is compromised. They also several other issues. I also believe that the companies should consider the rotation of their audit firm to ensure auditor objectivity, professionalism and independence. I have not set a specific number of years. In this case I voted FOR.

Ford’s Summary Compensation Table shows the highest paid named executive officer (NEO) was CEO James P. Hackett at $16.7M. I’m using Yahoo! Finance to determine market cap ($45.3B) and I am roughly defining large-cap as $10B, mid-cap as $2-10B, and small-cap as less than $2B. Ford is a large-cap company. According to the Equilar Top 25 Executive Compensation Survey 2015, the median CEO compensation at large-cap corporations was $10.3M in 2014, so pay was well over that amount.

Ford shares underperformed the S&P 500 over the most recent one, two, and five year time periods. Ford also appears on As You Sow‘s list of the 100 Most Overpaid CEOs. Prior reports have shown that being on that list is correlated with lower returns in subsequent years. The ratio of reported CEO’s annual total compensation to median employee’s total annual compensation for fiscal year 2017 is 285 to 1.

Egan-Jones Proxy Services takes various measures to arrive at a proprietary rating compensation score, which measures wealth creation in comparison to other widely held issuers. “Some Concerns” is their rating given on compensation issues for Ford. Egan-Jones concludes:

Given underperformance, above median pay and my concern about wealth distribution, E-G’s recommendation and their short-sighted move out of sedans, I voted “AGAINST” the say-on-pay item.

We believe that shareholders should not support the passage of this plan as proposed by the board of directors. We recommend the board seek to align CEO pay more closely with the performance of the company and work to reduce the cost of any similar plan that may be proposed in the future. Therefore, we recommend a vote AGAINST this Proposal.

After analyzing the pay package, it did not require any convincing. I voted AGAINST.

5. Equal Voting Rights for Each Shareholder

This proposal is from John Chevedden and is nearly identical to others I have submitted, so of course I voted FOR. Dual-class voting stock is inherently undemocratic. It reduces accountability by allowing corporate control to be retained by insiders disproportionately to their money at risk. Egan-Jones recommended for. Vote FOR.

Ford Motor Company apparently left off the title of this proposal submitted by the Unitarian Universalist Association. The proposal is good governance, simply requesting a report to account on lobbying activities. It would do nothing to prevent any such lobbying activities. As I have reminded readers in previous posts, the US Supreme Court’s decision in Citizens United v. Federal Election Commission was based on a false premise. Justice Kennedy’s majority opinion justifies the decision by pointing to the Internet.

And the Court expressed enthusiasm that technology today makes disclosure “rapid and informative.” Yet, corporations are notrequired to make the disclosures of lobbying expenditures and political contributions to shareowners as Justice Kennedy seems to have believed. Vote FOR.

This proposal is from As You Sow. Again, Ford left off the title. Ford Motor Company is requested to report on how our fleet GHG emissions through 2025 will increase given its planned changed in fleet mix and industry’s proposed weakening of CAFE standards or, conversely, how it plans to retain emissions consistent with, or better than, CAFE standards to ensure its products are sustainability in a rapidly decarbonizing vehicle market. Want an environment favorable to human health?

This is my proposal (James McRitchie), so of course I voted in favor of it. See #6 above. The same arguments apply.

Proxy Democracy was down. Proxy Insight reported on Canada Pension Plan (CPPIB), Texas Teachers, Calvert, CBIS, Australia’s Super and Trillium. All funds voted FOR all the shareholder proposals and against the stock plan. Calvert and Trillium voted against most of the directors. Trillium also voted agains the pay package. CBIS had the only vote against the auditor.

Unless the Board of Directors determines otherwise, next year’s annual meeting will be held on May 9, 2019. Any shareholder proposal intended for inclusion in the proxy materials for the 2019 Annual Meeting must be received by the Company’s Secretary no later than November 29, 2018, and can be sent via facsimile to 313-248-8713. Shareholder proposals submitted outside of the process described in Rule 14a-8 of the Securities Exchange Act of 1934, as amended, will not be considered at any annual meeting of shareholders. The Company will not include in the Notice of Annual Meeting proposals not in compliance with SEC Rule 14a-8 and, under the Company’s By-Laws, no business other than that stated in the notice of meeting can be transacted at the meeting.