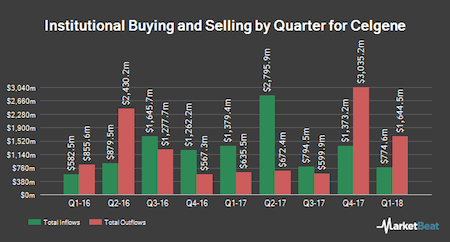 Celgene Corporation (CELG), a biopharmaceutical company, engages in the discovery, development, and commercialization of therapies for the treatment of cancer and inflammatory diseases worldwide. Most shareholders do not vote.  Reading through 70+ pages of the proxy takes too much time. Your vote will make only a small difference but could be crucial. Below, how I voted and why.

If you have read these posts related to my portfolio and proxy proposals for the last 22 years and trust my judgment, skip the 10 minute read. See how I voted my ballot. Voting will take you only a minute or two. Every vote counts.

I voted with the Board’s recommendations 66% of the time. View Proxy Statement via SEC’s EDGAR system (look for DEF 14A).

From the Yahoo Finance profile: Celgene Corporation’s ISS Governance QualityScore as of April 1, 2018 is 6. The pillar scores are Audit: 1; Board: 10; Shareholder Rights: 3; Compensation: 2.

Egan-Jones Proxy Services recommends For all board nominees, except Michael D. Casey, Ernest Mario, and James J. Loughlin. Each served for 10 years or more. Egan-Jones assumes they are no longer independent and should not sit on critical committees, such as compensation, nominating and audits. Yes, independence erodes over time. Given the poor performance of Celgene, I voted again these directors. I also voted Against members of the compensation committee, since they recommended excessive pay.

I have no reason to believe the auditor engaged in poor accounting practices or has a conflict of interest. Egan-Jones recommends voting against the auditor if they served for seven years. Independence becomes compromised by that time. The Celgene auditor served less than seven years. No other significant issues arose in review.

Celgene’s Summary Compensation Table shows the highest paid named executive officer (NEO) was CEO Mark J. Alles at $13.1M. I’m using Yahoo! Finance to determine market cap ($57.3B). I define large-cap as $10B, mid-cap as $2-10B, and small-cap as less than $2B. Celgene is a large-cap company.

Egan-Jones Proxy Services uses a proprietary rating compensation system to measures wealth creation in comparison to other companies. “Superior” is their compensation rating for Celgene. They recommend a vote For the say-on-pay item.

Given above median pay, below average performance and my concern for growing inequality, I voted AGAINST pay and members of the compensation committee: Michael D. Casey, Carrie S. Cox, James J. Loughlin, and Ernest Mario.

This is my proposal. (James McRitchie) Celgene adopted a ‘lite’ form of proxy access after a proposal by the UAW Retiree Medical Benefits Trust passed in 2016.  Still, the proposal is definitely ‘lite,’ since it limits nominating groups to 20 members, instead of having no cap.

Egan-Jones recommends a vote For. The Board takes issue with my argument, “Under current provisions, even if the 20 largest public pension funds were able to aggregate their shares, they would not meet the 3% holding criteria at most of companies examined by the Council of Institutional Investors. Allowing an unlimited number of shareholders to aggregate shares would facilitate greater participation by individuals and institutional investors in meeting the stock ownership requirements, 3% of the outstanding common stock entitled to vote.”

The Board argues, “Among the top 100 largest stockholders alone, there are countless combinations of two or more stockholders whose aggregate holdings would equal or exceed 3%.” However, their analysis completely disregards the fact that eligible group members must have continuously held qualifying shares for three years. Many funds, even indexed funds, trade shares frequently just to keep balanced with an index or other target. See graphic at the top of this post.

Additionally, the largest owners of Calgene (Vanguard, BlackRock, SSgA, and Northern Trust) have yet to file a proxy proposal. They are unlikely to form a group to nominate directors, since that is a much more difficult task.

Activist funds, such as Millennium Management, CalPERS, CalSTRS, and Trillium hold much smaller stakes. Trillium’s holdings, while valued at almost $16M, represent only .03% of shares. The 20 member limit adopted by Celgene and most other companies allows them to say they have proxy access, without having usable proxy access. Putin’s Russia holds elections few American consider them legitimate.

In a capitalist economy it is competition and the free-flow of ideas that drives productivity. That is why Governance Changes through Shareholder Initiatives found the announcement of shareholder proposals for proxy access submitted to 75 US public companies resulted in $10.6 billion of increased shareholder value across targeted firms. Voting For the proposal is likely to raise the value of Celgene shares.

John Chevedden submitted this proposal. Egan-Jones supports it. An independent chairman is important at Celgene Corporation since our Chairman, Robert Hugin, and our Lead Director, Michael Casey, each had more than 15-years long-tenure. Mr. Casey also had additional influence, since he was on our Executive Pay Committee and our Nomination Committee.

Stockholders wishing to include proposals in the proxy materials in relation to our Annual Meeting of Stockholders to be held on or about June 12, 2019 must submit the same in writing, by mail, first-class postage pre-paid, to Celgene Corporation, 86 Morris Avenue, Summit, New Jersey 07901, Attention: Corporate Secretary, which must be received at our executive office on or before December 31, 2018. Such proposals must also meet the other requirements and procedures prescribed by Rule 14a-8 under the Exchange Act relating to stockholders’ proposals.

Be sure to vote each item on the proxy. Items left blank are voted in favor of management’s recommendations. (See Broken Windows & Proxy Vote Rigging – Both Invite More Serious Crime). I generally vote against pay packages where NEOs were paid above median in the previous year but make exceptions if warranted. According to Bebchuk, Lucian A. and Grinstein, Yaniv (The Growth of Executive Pay), aggregate compensation by public companies to NEOs increased from 5 percent of earnings in 1993-1995 to about 10 percent in 2001-2003.