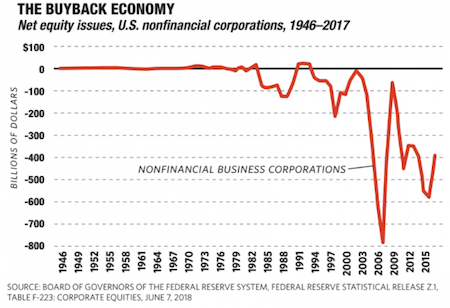 A stock buyback can increase senior executive pay, unrelated to performance. First, stock buybacks increase the value of long-term performance stock options and other forms of equity pay. Second, senior executives sometimes time their own stock sales to take advantage of the bump in price that usually accompanies stock buyback announcements. Such behavior defeats the purpose of incentivizing a long-term focus. To address our concern that performance pay should not be artificially boosted by a stock buyback, I recently submitted a proposal to Cisco Systems and expect to submit similar proposals to other companies.

Last year, I submitted a similar proposal to GE. The updated submission to Cisco Systems adds a provision to address market timing. As always, I welcome suggestions and comments from interested readers. How can such resolutions be improved? What have I missed? Or, if you disagree, why are my concerns unwarranted? Use the comment section below the post or email me.

Deduct Impact of a Stock Buybacks from Executive Pay

Resolved: Shareholders of Cisco Systems (“CSCO”) ask the Board of Directors to adopt a policy that it will not utilize “earnings per share” (“EPS”) or its variations (e.g., diluted or operating EPS) or financial ratios (return on assets or net assets or equity) in determining senior executive incentive compensation or eligibility for such compensation, unless the Board utilizes the number of outstanding shares on the beginning date of the performance period and excludes the effect of stock buybacks that occur between that date and the end of the performance period. The policy shall be implemented without violating existing contractual obligations in existence on the date this proposal is adopted.

Supporting Statement: According to last year’s proxy statement, a substantial proportion of compensation to executives was based on performance targets, including earnings per share (EPS). https://www.sec.gov/Archives/edgar/data/858877/000119312517319338/d448947ddef14a.htm#toc

We support the use of performance metrics that align senior executive pay with long-term sustainable growth. However, this alignment may not exist if a company is using earnings per share or certain financial return ratios to calculate incentive pay awards at a time that the company is aggressively repurchasing its shares or if senior executives use the jump in stock price resulting from a buyback announcement as a chance to sell stock intended to incentivize performance.

Research by Robert Ayres and Michael Olenick of INSEAD found “the more capital a business invests in buying its own stock, expressed as a ratio of capital invested in buybacks to current market capitalization, the less likely that company is to experience long-term growth in overall market value. [Secular Stagnation (Or Corporate Suicide?) https://ruayres.wordpress.com/2017/07/11/secular-stagnation-or-corporate-suicide]

Another recent study found “twice as many companies have insiders selling in the eight days after a buyback announcement as sell on an ordinary day.” [Stock Buyouts and Corporate Cashouts https://corpgov.law.harvard.edu/2018/06/13/stock-buyouts-and-corporate-cashouts/#23b] Commissioner Jackson stated his belief that rules should be amended, “at a minimum, to deny the safe harbor to companies that choose to allow executives to cash out during a buyback.”

This proposal would not affect the board’s discretion about the appropriate method of returning value to shareholders. The proposal would, however, address the distorting effect that stock buybacks can have on calculating and redeeming what is supposed to be incentive pay for senior executives based on genuine improvements in performance.

Vote For Proposal #X (number to be determined by Cisco):