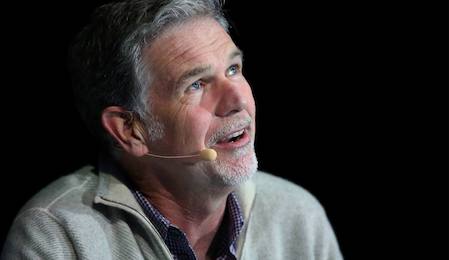 Netflix Approach to Governance: Genuine Transparency with the Board (download) by David F. Larcker and Brian Tayan takes a look at one aspect of corporate governance at Netflix and finds “a radically different approach to information sharing” by management with the Board. Shareholders are largely left out of the equation.

Netflix Approach to Governance has the appearance of a balanced look at how management shares information with the Board. There is no suggestion the approach can be widely copied. Says Larker,

I think it would be hard to put this type of system in place at older and more mature organizations. Innovative organizations that want and need the insights from board members can clearly adapt this type of approach. You need a CEO who wants a high level of discussion about strategy, etc., and is open to alternative points of view.

Transparency works at Netflix, at least in part, because CEO Reed Hastings understands board members would not have the confidence to make tough calls unless they have a better understanding of the company.

Transparency is hard to argue against, unless it leads to directors leaking information that reaches competitors. Larcker and Tayan interviewed CEO Reed Hastings and most of the board members. They describe two key features of what they appear to believe is remmanagement transparency.

Board members attend monthly and quarterly senior management meetings as observers. Communications to the board take the shape of approximately 30-page memos that are heavy on analysis and contain links to all relevant data on the company’s internal computer systems. (Another Netflix Disruption: A Transparent Board)

More frequent meetings with senior staff and more information allows Netflix directors to work more effectively, since they are better able to assess strategic developments. It is hard to tell what impact transparency is having on the company but,

The overall tone Reed has set, really from early days, is around transparency. … There is no editorializing. There’s no censorship.

It’s just a deep desire to hear rational, well-argued pros and cons of any decision.

No censorship and frank discussions between management and board; if other companies are not operating that way, why not? Equally important, why does that approach not carry through to the relationship between shareholders and the board?

Their research, part of the informative Stanford Closer Look Series, begins with the following sentence:

The hallmark of good corporate governance is an independent-minded board of directors to oversee management and represent the interests of shareholders.

The only other significant reference to shareholders comes later in the following sentence:

While fiduciary rules allow directors to rely exclusively on information provided by management, dynamics such as these can reduce the quality of that information and impair their ability to make good decisions on behalf of shareholders.

Even through the law allows directors to rely on what the CEO and other senior executives tell them, directors make better decisions when the company is more transparent – when they can observe meetings further down the chain and have more direct access to company relevant data. Yet, the Netflix approach to governance appears one-sided. Transparency and dialogue are missing when it comes to management and shareholders.

As I pointed out in a recent post, Netflix has repeatedly ignored shareholder votes. (Will Netflix Ignore Stockholders Again?) While proxy proposals are generally precatory, most companies implement those receiving a majority vote and often those that do not. The Netflix approach to governance appears to ignore proxy votes whenever legally possible.

Given the Netflix approach to governance with regard to shareholders, I expect the only proposal that will be adopted from this year is the binding proposal to require a majority vote in uncontested directors elections. The vote in favor surpassed the bylaw requirement of a two-thirds threshold.

Although I do not question the scholarship of Larcker and Tayan, their discussion of the Netflix approach to governance would benefit from an examination of shareholder relations with the board. We hope that is on their agenda for a closer look.

Netflix Approach to Governance: Other Views