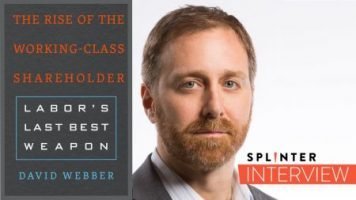 The Rise of the Working-Class Shareholder: Labor’s Last Best Weapon by David Webber is sure to get readers thinking (purchase).

Those sentences, early in the book, had me hooked. As a sociologist, I have long recognized corporations as the most powerful force in American life. I have tried to influence corporations through legislation, regulations, boycotts and protests. My most fruitful results have been from “inside,” as a shareholder advocate. While I am not sure more democratic corporate governance is labor’s ‘last’ or even its ‘best’ weapon, it is certainly an underutilized tool.

Thomas Piketty found investment income accelerates at a faster pace than wages. To address that issue, we need many more participants in capitalism (A Nation of Small Shareholders: Review Essay).  Second, we need to bring our full values to investing and be concerned with wealth inequality, climate change, diversity, etc. Investing must become social investing. We need to anticipate how our investments, including how we monitor and shape those investments as owners, impacts society and the environment. Helping more people investors and heightening their awareness of environmental, social and governance (ESG) issues is necessary, if we are to create a salubrious economy.

I would go further. We need a more radical departure from what is typically defined as fiduciary duty. The prudent man standard of ERISA (Employee Retirement Income Security Act of 1974) is a “lemmings rule” because it requires fiduciaries to act like other fiduciaries. If most fiduciaries are investing in something that is highly profitable but will soon make earth uninhabitable, many believe the prudent man standard dictates all trustees must follow. Yet, even lemmings are not that dumb. Mass suicide was not nature but a Disney invention. Fiduciaries should focus on long-term sustainable growth.

In 1994 the 3rd Restatement of Trust Law drafted by the National Conference of Commissioners on Uniform State Laws set out a list of usual considerations for meeting the Standard of Care, such as economic conditions, tax consequences, expected total return, needs for liquidity, etc. One interesting consideration that needs more attention was the following:

an asset’s special relationship or special value, if any, to the purposes of the trust or to one or more of the beneficiaries.

What “special value” does any specific investment have to one or more of the beneficiaries? Yes, fiduciaries must pay close attention to the money but they should also consider other potential benefits that beneficiaries are known to value, such as clean air, clean water, affordable housing, a healthy planet and economy, etc.

When Norway required public boards to have 40% or more of each gender the initiative was not justified on the basis of expected higher returns because of more diverse boards. The focus was on societal needs for justice, democracy, participation, equality and human rights. Fiduciaries in America need to push the envelope. We are not Homo Economicus.

Webber’s The Rise of the Working-Class Shareholder is full of interesting bits of recent history, such as campaigns by CalPERS, AFSCME, NYC, SEIU, AFL-CIO and other union-related funds. That is the bulk of the book, with many lessons learned by labor leaders. Readers can learn much from the book on what works and what does not. The discussion of hedge funds may be particularly instructive to many, as will the discussion of the ugly push for conversion of defined benefit plans to defined contribution plans. (See Making Corporate Governance Decisions that Work for Whom? under the heading “CalPERS Under Attack.”)

The Rise of the Working-Class Shareholder: A Quibble

The Rise of the Working-Class Shareholder asserts, “in many respects, the D.C. Circuit’s overreaching opinion had the perverse effect of strengthening proxy access rights” (74) because shareholders have won such rights in the marketplace. However, although proxy access rights have become the norm at most companies in the S&P 500, those rights have not filtered down to most mid- and small-cap companies where boards tend to be less independent and shareholder rights more fragile.

Additionally, most proxy access bylaw provisions limit access to groups of twenty shareholders or less. The Council of Institutional Investors (CII) found that limitation prohibitive for their members… and those members hold more than $3 trillion in assets. The only funds that can use proxy access, in most cases, are huge funds like BlackRock, Vanguard, Fidelity, UBS and State Street, with assets of over $20 trillion.  BlackRock, Vanguard, and State Street alone constitute the largest shareholder in at least 88% of S&P 500 firms. These funds have never filed a shareholder proposal. They are unlikely to invoke proxy access. Doing so takes more effort and these funds compete on the basis of low costs. Proxy access has never been used. That is likely to remain so for the foreseeable future.

I am not against proxy access. CII credited my petition to the SEC for re-energizing the debate over proxy access. (See Equal Access – What Is It?) I have also filed dozens of proxy access proposals. However, “industry standard” proxy access bylaws provide a pale set of rights on comparison to the rules struck down by the court.  The SEC rules had no cap on the number of participants, allowed a higher proportion of boards to be renominated, did not contain a minimal threshold for renomination, etc. The Court’s decision in no way “had the perverse effect of strengthening proxy access rights”

The Rise of the Working-Class Shareholder: Conclusion

Weber has recommendations scattered throughout the book but concludes with the following (highly abbreviated below):

These are excellent recommendations, part of the reason The Rise of the Working-Class Shareholder is getting justified attention. As Webber goes around the country on speaking tours,  he is soliciting additional suggestions from working-class people. In that spirit, I suggest the following:

Shareholders, acting as shareowners, should be able to demand that corporate directors and fund managers represent their interests as full human beings, not simply as imaginary rent-seeking robots. If that ever happens, future shareholders might spend as much time on corporate governance as they do now on market timing and stock picking.

When that day comes – if that day comes – we will we transform the corporation’s pathological pursuit of profit and power, as pictured in its most vivid form perhaps by Joel Bakan, into fully developed mediating structures that help individuals make our world both more productive but also more salubrious. The rise of working-class shareholders will be central to the success of such efforts. (purchase)

The Rise of the Working-Class Shareholder: Other Resources