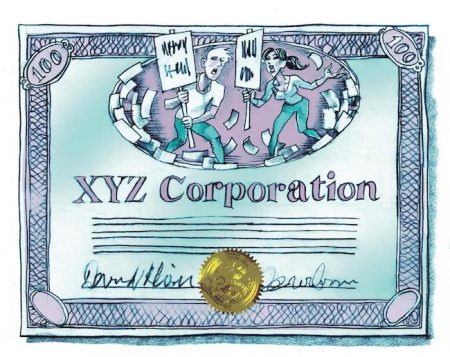 The deceptive title of a recent op-ed in the Wall Street Journal would not keep politics out of the boardroom. Instead, the recommendations would deny shareholders the right to request boards disclose those politics, in addition to denying many other long-standing rights. Read the op-ed and weep that such trash gets published in the Journal.

This is my response to the 7/18/2018 op-ed “Keep Politics Out of the Boardroom” by Phil Gramm and Mike Solon. I waited before publishing this, in case WSJ chose to publish my rebuttal. They did not.

Response to “Keep Politics Out of the Boardroom”

I am a shareholder advocate and file dozens of proposals each year based on relatively small holdings at over 100 firms. Companies frequently agree to implement my proposals. Many other proposals go on to win majority votes.

Gramm and Solon argue, “We are all free to invest our own money to promote broadly defined objectives.” Agreed; let the free market determine where individuals invest their money and how index funds vote. If people lack information about how funds vote and their impact, the answer is not to stop requiring them to vote.

Votes are real assets and should be treated as such. Instead of suppressing the vote, encourage voting records to be widely disseminated and easily researchable on an interactive database. Ideally, votes would be announced and posted before the annual meeting where each vote will be counted. That would lead to more informed discussions about the efficacy of proxy votes.

Investors are not clamoring to stop shareholder proposals on ESG issues or to suppress proxy analysis and voting. Those recommendations are coming from management groups like the Business Roundtable, US Chamber of Commerce and the so-called “Main Street Investors Coalition” (funded by the National Association of Manufacturers).

It is obvious from the growth of SRI funds and increased use of ESG considerations by just about all funds, Americans see no conflict between investing and utilizing ESG factors. In fact, investors increasingly want businesses to serve useful social purposes while earning returns. Delaware’s Voluntary Sustainability Certification Law now facilitates the ability of corporations to document and obtain certification of their sustainability reporting.

Justice Kennedy’s majority opinion in Citizens United assumed corporations already disclosed their political contributions. He wrote, “With the advent of the Internet… Shareholders can determine whether their corporation’s political speech advances the corporation’s interest in making profits, and citizens can see whether elected officials are ‘in the pocket’ of so-called moneyed interests.”

However, corporations are not required to make such disclosures. Gramm and Solon want to effectively ban shareholders from requesting such information. How can we, as shareowners, hold corporate managers accountable when we do not know what candidates or measures our corporations are supporting?

Do not make the mistake of entrenching managers at the expense of shareholders, society, the environment and the free market of ideas that drive our economy.

Don’t Keep Politics Out of the Boardroom

At least thirty thirty years ago, I was a management auditor with the State of California. One of the companies I audited offered to double my salary if I came to work for them. I told them I thought I could do more good to society working for the State. They asked me to think about the good I could do with all that extra money.

Much later, the Bill & Melinda Gates Foundation made a similar argument with regard to their investing and proxy voting. They were in it for the money, which they would then use to fund their social and environmental goals. In looking at the Foundation’s Investment Policy page, it appears they now “consider other issues beyond corporate profits, including the values that drive the foundation’s work.”

The Gallup 2017 State of Worldwide Workforce Report revealed that only 15% of full-time employees worldwide are enthusiastic about their work. The longer we keep politics out of the boardroom, the longer it will take to expand that 15%. When looking for a job, we need to integrate what we love with what we are good at, can be paid for and what is needed for a better world. Similarly, we need to bring our full values to how we invest and govern the companies who use our investments.

Financial Reporting Not Same as Guidance
Who Wants Impact Investing?