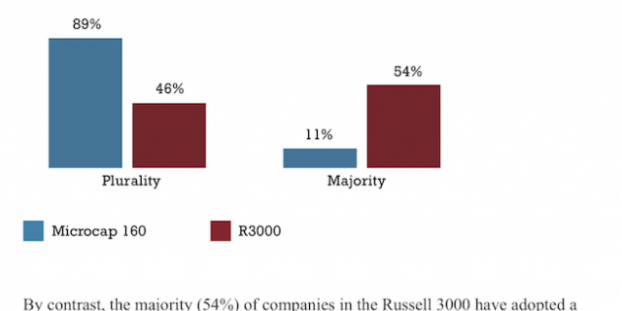 Microcap Board Governance, a study conducted by Board Governance Research LLC commissioned by the Investor Responsibility Research Center Institute (IRRCi), examines microcap board governance at 160 companies. That represents about  ten percent of all companies with less than $300 million in market capitalization traded on major U.S. stock exchanges.

Most microcaps are not included in major indices. Many do not have analysts following their performance. As a result, microcap governance practices have not received the same level of scrutiny as larger capitalization companies. In fact, as I attend investor and director conferences, about the only one I hear frequently talking about microcap board governance is Adam J. Epstein, of Third Creek Advisors, LLC.

Register for a webinar on Wednesday, August 22nd at 4:00 PM ET to review the findings. Leading the webinar I expect will be Jon Lukomnik, Executive Director
IRRC Institute, as well as Annalisa Barrett, Founder and CEO of Board Governance Research LLC.

The Investor Responsibility Research Center Institute is a not-for-profit organization headquartered in New York, NY, that provides thought leadership at the intersection of corporate responsibility and the informational needs of investors.   IRRCi recently selected the John L. Weinberg Center for Corporate Governance (Weinberg Center) at the University of Delaware as its successor organization

Microcaps are an intriguing and often overlooked corner of the equity market. This report is a much-needed deep dive into the corporate governance of microcaps so investors can better understand the landscape. The findings contradict a number of microcap misconceptions. For example, these aren’t necessarily young companies with the founder at the helm. Instead, about one-quarter of microcaps have been public for less than five years and only 14 percent of microcap CEOs are the founders.

At the same time, the report suggests some paths microcap companies should consider moving toward consensus best practice for corporate governance. For example, there is nothing associated with size that suggests it is a good idea to have an all-male board or to fail to establish the position of a lead independent director when there is a combined chair/CEO structure.

Said Annalisa Barrett, report author, chief executive officer and founder of Board Governance Research and clinical professor at the University of San Diego School of Business;

The smallest U.S. companies play an important role in our economy, so everyone has an interest in how they are governed. Investors, employees, customers and suppliers of these microcap companies all benefit when they are well-governed and their boards have the optimal structure and practices in place to provide effective oversight and guidance to management.

I started going through the list of surveyed companies to find possible investment opportunities. Data on most is scarce. Investment is speculative. However, it looks like I will find about ten good opportunities. Once invested, I will no doubt agitate for better governance.