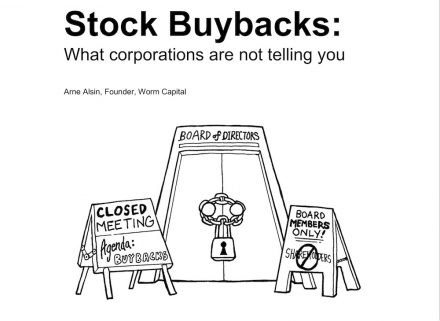 WBA Stock Buyback Proposal is my latest submission in an attempt to address CEO pay and long-term performance. As mentioned previously (Stock Buyback: Shareholder Initiative) this is a new type of proposal for me. I welcomed feedback from readers and certainly got it. The wording of this proposal is substantially better, thanks to your many suggestions!

Among papers cited by readers, I found Stock Buybacks: What corporations are not telling you to be the most helpful. That report came from Arne Alsin, the Founder of Worm Capital. Below are some bullet points from the Executive Summary (modified and abbreviated).

Resolved: Shareholders of Walgreens Boots Alliance Inc (“WBA”) request that any open market share repurchase programs or stock buybacks (“buybacks”) adopted by the Board after approval of this shareholder proposal shall not become effective until such new programs are approved by shareholders.

Supporting Statement: WBA announced a $10 billion buyback in June 2018 http://www.walgreensbootsalliance.com/newsroom/news/walgreens-boots-alliance-authorizes-10-billion-share-repurchase-program-and-increases-quarterly-dividend.htm. According to last year’s proxy statement, a substantial proportion of compensation to executives was based on performance targets tied to stock price, including earnings per share (EPS) https://www.sec.gov/Archives/edgar/data/1618921/000119312517354603/d452082ddef14a.htm.

Performance metrics that align senior executive pay with long-term sustainable growth are a plus. However, this alignment may not exist if a company uses earnings per share or certain financial return ratios to calculate incentive pay awards when the company is aggressively repurchasing its shares or if senior executives use the jump in stock price resulting from a buyback announcement as a chance to sell stock intended to incentivize performance.

Research by Robert Ayres and Michael Olenick of INSEAD found “the more capital a business invests in buying its own stock, expressed as a ratio of capital invested in buybacks to current market capitalization, the less likely that company is to experience long-term growth in overall market value [Secular Stagnation (Or Corporate Suicide?).

Another recent study found “twice as many companies have insiders selling in the eight days after a buyback announcement as sell on an ordinary day” (Stock Buyouts and Corporate Cashouts). SEC Commissioner Jackson stated that rules should be amended, “at a minimum, to deny the safe harbor to companies that choose to allow executives to cash out during a buyback.”

For more information, read Stock Buybacks: What Corporations Are Not Telling You by Arne Alsin, The Curse of Stock Buybacks, and Q&A: Economist William Lazonick On Stock Buyback Mania That Threatens The American Economy.

Legacy pharmacies could face an existential threat in the near future from online competition (Amazon buys online pharmacy PillPack). Why not gear up for that battle or provide a one-time dividend?

Since my WBA Stock Buyback Proposal submission, another report was released by the Roosevelt Institute, Curbing Stock Buybacks: A Crucial Step to Raising Worker Pay and Reducing Inequality.

Further ideas on how the template can be improved for other companies? Other supporting studies? What have I missed?  If you disagree, why are my concerns unwarranted? Use the comment section below the post or email me.