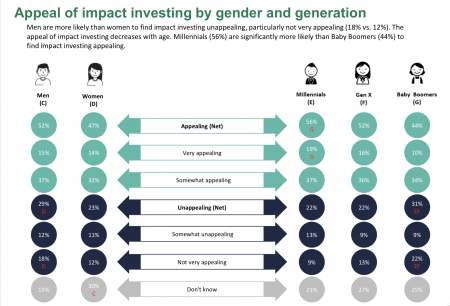 “Impact investing” – financial investments designed to generate a measurable, positive impact on society, while also providing potential returns – is growing in popularity, according to new research conducted by American Century Investments. The “appeal” of impact investing reached 49% among 2018 survey participants, compared to 38% in 2016. At 56%, Millennials find impact investing most appealing, followed by Gen Xers and Baby Boomers at 52% and 44%, respectively.

A representative sample of more than 1,000 American adults (18 years of age or older) were surveyed in July 2018 to better understand generational and gender-based attitudes toward impact investing. American Century conducted a similar survey in 2016.

This research shows that interest in impact investing continues to grow across all age groups but particularly among the next generation of investors. As an asset manager, we’re committed to offering solutions for those seeking to have a positive impact on society by investing in companies whose business activities are focused on addressing global issues, notably the United Nations’ Sustainable Development Goals (SDGs).

When asked about the importance of certain factors while making investment decisions,“return on the investment” was considered “somewhat or very important” by 86% of 2018 respondents, up from 81% in 2016. “Fees, risks and length of time money will be invested” also ranked high as considerations in both studies. “Impact on society,” was selected by 54% of respondents in 2018, up from 42% in 2016. The response was popular among Millennials (60%) and women (57%).

As one might expect, factors like investment returns and fees remain top considerations when determining how to invest money. The significant increase in the percent of investors factoring societal impact into the decision-making process, particularly among younger investors, confirms our view that investors do not need to choose between impact and returns.

Nearly half (45%) of the 2018 survey respondents said they intentionally choose to do business with companies whose “values align” with their own. This finding was consistent across all gender and age groups, with Millennials ranking it highest at 47%.

When presented with a broad list of causes that align with their personal values, a third (33%) selected “healthcare/disease prevention and cures” as a priority when making an impact investment. This cause ranked the highest followed by “environment/sustainability, improved education, mitigating poverty and alignment with religious principles.” Other mentions garnering single-digit responses included “animal rights” and “veterans issues.”

Investor interest in making an impact investment tied to healthcare/disease prevention aligns well, not only with the SDG goal tied to good health and well-being, but also with AmericanCentury’s unique ownership model, which we view as the ultimate example of investing with impact. As we strive to deliver superior investment results for clients and they continue to entrust us with their assets, our success and profitability will continue to generate positive societal impact around basic medical research funding that is aimed at finding cures for life-threatening diseases like cancer.

The survey was conducted among a sample of 1,005 adults, comprising 503 men and 502 women 18 years of age and older from July 9-11, 2018. The study was fielded using Engine’s twice-weekly Online CARAVAN® Omnibus Survey. The results from the survey were weighted by age, sex, geographic region, race and education to ensure reliable and accurate representation of the adult U.S. population.

In reviewing the report, I found most respondents did not know what “impact investing” is. “Overall familiarity with Impact Investing jumped from 20% in 2016 to 24% in 2018.” 32% of Millennials were familiar with the concept, followed by Men (30%), Gen X (26%), Women (19%) and Baby Boomers (17%). It would be interesting to know if those familiar with the concept are more in favor of it.

American Century is to be applauded for undertaking the survey. A somewhat similar survey was undertaken by the Main Street Investors Coalition (which is not composed of retail shareholders but of corporate managers, headed by a former Trump Administration official). The Coalition concluded that investors are interested in returns, not having an impact. I am pleased to see American Century recognize investors want both returns and a positive impact.

I sent the following email to American Century:

I see that 2017 was the first year that American Century voted in favor of a few shareholder proposals aimed at addressing climate change. Has this report led to a reexamination of the fund’s proxy voting policies? Can we expect American Century to take a more active role in ESG issues to address increasing client interest in “impact investing”? How will the study impact how your funds invest and vote?

Their response, if any, will be noted in comments below. Regardless of how it American Century utilizes the information, it is clear that it would be to their advantage to ensure their investments and votes have the kind of impact Americans increasingly want. I hope they will follow this report with another aimed at specifically at their own investors. It would be wonderful if all funds took more similar surveys of the public and of their own investors, including public pension funds like CalPERS.

We are all engaged in impact investing. However, we would all sleep better if we knew the impacts of our investments were positive, rather than negative, on society and the environment. Once Americans become familiar with impact investing, it is sure to be an even higher priority.

Keep Politics Out of the Boardroom?
September 13th Agenda for SEC-IAC

One Response to Who Wants Impact Investing?