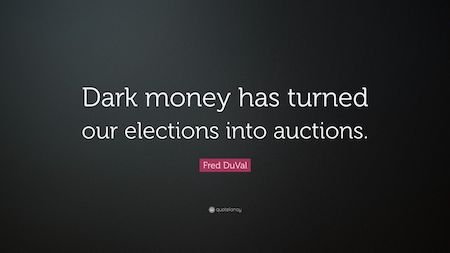 Dark money risk is highlighted in recent fine. State Farm agreed to a $250 million settlement last week for $4 million in contributions it allegedly steered through conduits to Illinois State Supreme Court candidate Lloyd Karmeier. Where is the outrage over dark money?

This case should be a wake-up call to companies of the high price they can pay when they try to hide their political spending, At a time when companies are under heightened pressure to give through secretive non-profits and trade associations, political transparency and accountability are critical for protecting their reputation and treasury.

It should also alert journalists to the need to pay much greater attention to ‘dark money’ that is flooding this year’s state and federal elections.

Aside from a Thomson Reuters column that ran September 5, the settlement has received scant media attention. The column detailed State Farm’s under the table efforts to elect a state supreme court justice who subsequently sided with the company on a major consumer fraud class action suit brought against the company.

The plaintiffs’ amended complaint alleged State Farm supported the election of Karmeier in 2003 and 2004 through the Illinois Civil Justice League and the U.S. Chamber of Commerce. State Farm allegedly orchestrated as much as $4 million of Karmeier’s $4.8 million in campaign contributions.

A State Farm lawyer helped found the ICJL, hired its president, Ed Murnane, and helped run Karmeier’s campaign without claiming about $700,000 in dark money expenses as in-kind donations, according to the complaint. The Illinois Civil Justice League’s PAC contributed nearly $1.2 million to the Karmeier campaign, the suit said.

After Karmeier’s election, plaintiffs who had obtained the $1.05 billion judgment against State Farm sought Karmeier’s recusal in the pending state supreme court appeal. In response to the plaintiffs’ recusal motion, State Farm misrepresented the magnitude of its support, the complaint had alleged.

The plaintiffs who obtained the judgment had claimed State Farm breached its contract with them by using nonoriginal parts in vehicles damaged in crashes. When the Illinois Supreme Court decided the case in 2005, Karmeier voted to overturn the award.

Karmeier joined the majority opinion that included four other justices. Another justice did not take part in the 2005 case, and two others partly concurred and partly dissented.

State Farm said in a press release announcing the RICO settlement that it continues to deny liability and it believes the plaintiffs’ claims are without merit. The press release says both sides settled because they “believe it is in the best interest of all the parties and to avoid protracted litigation and appeals that could continue for several more years.” (State Farm to pay $250M to settle suit claiming it orchestrated win of justice who voted its way)

What I’d like to know with regard to this specific case regarding dark money is the following:

Over the next few weeks, CPA will release the 2018 CPA-Zicklin Index. The Index will show which companies in the S&P 500 have adopted “dark money” policies. The Index is the only benchmarking of companies on their political disclosure and accountability policies.

Founded in 2003, the Center for Political Accountability is a non-profit, non-partisan advocacy organization, recognized as bringing sunlight to corporate political spending and making political disclosure and accountability the norm.

DONATE if you think democracy should not be turned into rule by the highest bidders or that judges should not be bought and paid for.