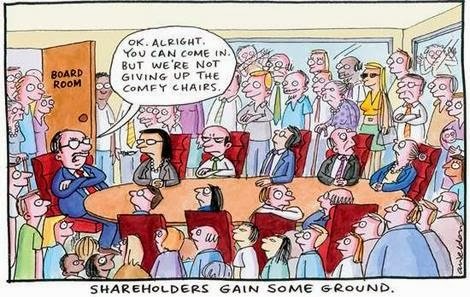 Shareholder Collaboration is a new ECGI working paper by Jill Fisch and Simone M. Sepe. Fisch is one of my favorite researchers, being insightful and less predictable than many of those in the primary academic hubs of corporate governance (Harvard, Stanford, and Delaware). In Shareholder Collaboration, the authors discuss the growing importance of a collaborative model, in contrast to models based on management power or shareholder power. (download paper in pdf)

The productive process has grown increasingly knowledge-intensive. This makes it unlikely that any one individual or organization, including the firm’s officers and directors, possesses the relevant information to respond effectively to all business challenges. As a result, today’s corporations no longer face just classic issues of asymmetric information, where insiders are likely to have access to private information unavailable to (or not verifiable by) outsiders. Rather, corporations also confront what we call “partial information” problems, under which both insiders and outsiders have access to private information not available to the other party.

Second, the rise of empowered and actively-informed investors offers a new source of well resourced and sophisticated firm-specific knowledge from outside the corporation. Under this change in the fact pattern, shareholders have increasingly come to resemble VC investors in that they are likely to possess information that is not just different but also “complementary” to that of insiders. This means that the informational whole of insider and outsider information is arguably greater than the sum of its individual parts, so that the aggregation of this information adds to firm value.

At many firms, partial information costs have surpassed agency costs. Firm value depends on intangible assets such as patents, R&D results, brand names, trade secrets and other forms of intellectual property. I touched on this topic twenty years ago in an interview with Margaret Blair. No single individual or organization either possesses or can effectively process all the relevant information.

The viability of a strictly management power model has been reduced by the rise of hostile takeovers, pay for performance and independent directors with little firm-specific knowledge. The authors argue the rise of activist hedge funds and the concentration of ownership among large asset managers like BlackRock, Vanguard and State Street has tipped the balance of power to shareholders.

Activist hedge funds can take a hit and run approach by seeking short-term gains from selling company assets, share buybacks, one time dividends, etc.. Or they can act more like a venture capitalist (VC), sharing power through joint decision-making. The first is primarily focused on value extraction. The second provides value-added services such as the following:

Identifying and evaluating business opportunities, including management, entry, or growth strategies; negotiating and closing the investment; tracking and coaching the company; providing technical and management assistance; and attracting additional capital, directors, management, suppliers, and other key stakeholders and resources.

Reconcentration of once dispersed owners means the largest fund managers have not only become universal forever owners, largely because of indexing strategies, they have also become the new deciders.  BlackRock, Vanguard and State Street attempt to vote against hedge fund strategies that focus on the short-term extraction of profits to the detriment of long-term viability. They aim to side with hedge funds when their initiatives are likely to add value over the long-term.

Since the largest funds are universal forever owners and cannot sell their stock, they are incentivized to invest in generating firm-specific information. Corporate managers understand these funds take a long-term approach. Only 6% of S&P 500 companies reported investor engagement in 2010. As of 2017, 72% reported engaging with investors.

The most frequent positive outcomes included additional company disclosures, specific changes in company practices and a commitment to act on issues of concern in the future. While many of those engagements could have been with hedge funds, most could equally be with advocates of ESG proposals by smaller institutional investors and individuals.

The authors not only discuss bilateral discussions between investors and companies but also multilateral initiatives such as the following:

Since Shareholder Collaboration was released there was also PJT Partners’ impending acquisition of CamberView Partners for $165 million. Defensive banking services have been dominated by Morgan Stanley, Goldman Sachs, Evercore and Lazard but CamberView Partners is known for a more wholistic approach. The acquisition is another sign that shareholder collaboration is on the rise.

Shareholder Collaboration: Why Does It Work?

First, markets may temporarily fail to aggregate information efficiently… Over time, prices converge to fundamental values. But the potential gap between prices and fundamental values reduces the effectiveness of prices in informing business decisions. It follows that while prices can be useful for the ex-post monitoring of corporate decisions, they are less useful for aggregating information on production decision-making.

Second, asset pricing theory teaches that when securities are “non-separable,” information incompetitive markets with partially informed traders does not get aggregated at all.

Investor information is often complementary with that held by both the firm and other investors. Each bases their own evaluation on an incomplete inaccurate evaluation. Communicating through trades is unidimensional. Shareholder collaboration is a more deliberative process, allowing for a deeper exchange of information and meaning.

The authors’ takeaway is that “a party’s say over the collaborative process should be determined according to the marginal contribution of that party’s informational inputs.” In most cases, the player with the highest marginal contribution would be the board. However, that may not be the case if the board and/or CEO are underperforming. Both parties must pitch their arguments to the giant owners, such as BlackRock, Vanguard and State Street, which are the larges owners in 88% of the S&P 500.

In the current information-rich economy, empowered shareholders increasingly resemble VC investors in their ability to provide value-added knowledge on top of capital and discipline.

Under these changes, the normative task is no longer only to determine the appropriate balance of shareholder and manager power to limit managerial moral hazard. Rather, this task involves a determination of the best way to aggregate the partial and complementary information that insiders and shareholders are likely to possess in a world of complex investments and reconcentrated equity ownership. As this Article has shown, collaboration offers a means to that end that neither unilateral decision-making nor the mediated transmission of information through markets can provide, adding corporate value.

A quick read of Shareholder Collaboration might leave the impression that only hedge funds and the largest investors like BlackRock, Vanguard and State Street have a role in shareholder collaboration. The authors may contribute to that assessment when they write that “last year, Blackock, Vanguard and State Street led efforts to induce Exxon management to devote greater attention to – as well as adopt greater disclosure and transparency about – the risks associated with climate change.” (my emphasis)

BlackRock, Vanguard and State Street certainly did not lead efforts to get more climate change reporting at Exxon. The New York State Pension Fund, Church of England, New York City Retirement Systems and dozens of other funds filed a proposal and led the effort in 2017.  BlackRock, Vanguard and State Street finally voted in favor of the reporting proposal after years of mounting pressure. Read my backstory on what moved BlackRock.

As the authors point out, the most frequent positive outcomes of collaboration are not changes in board composition but additional company disclosures, specific changes in company practices and a commitment to act on issues of concern in the future. Many collaborative efforts are resolved prior to proxies being filed. BlackRock, Vanguard and State Street exercise quiet diplomacy behind the scenes. If they have led change efforts most of us will never know.

However, we do know who filed proposals that could have led to shareholder collaboration. John Chevedden and shareholders associated with him (including James McRitchie/Myra Young and Kenneth Steiner) submitted or co-filed the most shareholder proposals during the 2018 proxy season—187 or 24% of all proposals. Other top filers were as follows:

Although hedge funds may get reimbursed according to their marginal contribution to the surplus created because they take large stakes before engaging, the system does not reimburse most other shareholders for work that may create value that is harder to measure.

“For example, consider the 2000 and 2003 proposals filed by religious investors at banks regarding subprime lending and securitization. The responsive companies—those that took action on the issues raised by the proposals— reportedly avoided being part of the financial crisis.” [Petition regarding resubmission of shareholder proposals under Rule 14a-8(i)(12), page 14]. Unfortunately, there was no shareholder collaboration at most banks and the resulting financial crisis cost Americans alone an estimated $13 trillion.

The closest we have come to putting a value on the “marginal contribution to the surplus” created by proxy proposals that could lead to shareholder collaboration may be the total sums paid to proxy advisors and proxy voting analysts at individual funds. Relative to potential impacts on the market, that total is a pittance. The Votermedia Shareowner Proposal Campaign is the only effort I know to date to try to remedy that situation. Creative solutions are needed.