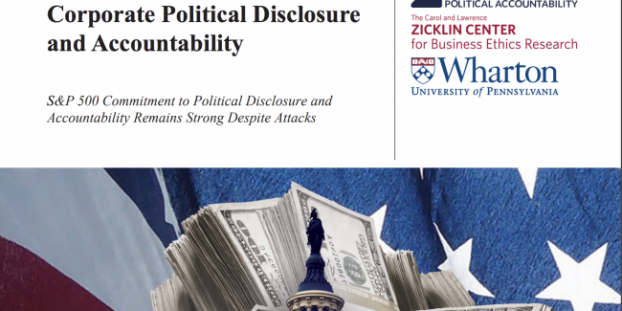 That is the chief finding to emerge from a non-partisan study by the Center for Political Accountability (CPA) and the Zicklin Center for Business Ethics Research at The Wharton School at the University of Pennsylvania.

Released in the run-up to the high-stakes 2018 midterm election, this year’s index is the first to examine these trends during an entire year of the Trump Administration and a Republican majority Congress.

It finds a pattern of large public companies holding steady in accepting and practicing disclosure and accountability with regard to their election-related spending. In several key categories, more companies are letting in sunlight or strengthening their related practices.

Data reflecting these trends are found in the 8th annual CPA-Zicklin Index of Corporate Political Disclosure and Accountability, issued by CPA in conjunction with the Carol and Lawrence Zicklin Center at The Wharton School.

According to the Index, 57 companies in the S&P 500 received the highest scores for political disclosure and accountability of 90 percent or above, up from 50 in 2017 and double the 28 companies identified in 2015. These 57 “Trendsetter” companies span all sectors of the U.S. economy. In addition, three companies received scores of 100 percent, up from one in 2017.

There are more S&P 500 companies with disclosure and accountability policies and practices that scored in the first and second tiers (100 percent to 60 percent), a total of 196 compared to 174 in 2015.

The number of core S&P 500 companies fully disclosing their election-related spending or prohibiting it increased for all five categories of this spending since last year, and since 2015. Similarly, there were increases for core companies having elements of political spending oversight and accountability. Further, the number of these core companies with a detailed policy governing electoral-related expenditures from corporate funds increased to 267 this year from 261 in 2017 and 225 in 2015.

A yearly benchmarking study launched in 2011, the Index is a helpful resource for shareholders, journalists, academics and business leaders interested in finding out which public companies are best and worst at transparency. The Index has gained widespread acceptance in an era of surging political spending and controversy over anonymous “dark money” contributions.

I can’t remember a more volatile mid-term election season. Companies that spend political money in this climate are taking a risk of consumer blowback or even boycotts. The new Index shows how companies are managing the risk through a voluntary approach to corporate political disclosure, or in some instances, they’re abstaining from spending political dollars.

We’ve seen a strong correlation between shareholder engagement and higher company scores for political disclosure and accountability. We will work with partner organizations to engage more companies to endorse sunlight in the year ahead.

According to William S. Laufer, Director of Wharton’s Zicklin Center:

This is a definitive win for the idea that well-aligned incentives can drive successful corporate self-regulation in some companies. And their success is that much more notable at a time of significant regulatory retrenchment. That said, no matter how far we have come, it is still fair to say that the road to corporate political transparency remains long and winding.

Data from the 2018 Index, which is based on a survey of information publicly available on company websites, will be added to the TrackYourCompany.org database maintained by CPA.

The 2018 CPA-Zicklin Index is available by clicking here.

CPA is a non-profit, non-partisan organization created in November 2003 to bring transparency and accountability to political spending. The Zicklin Center for Business Ethics Research at The Wharton School sponsors and disseminates leading edge research on critical topics in business ethics.

Prompt disclosure of expenditures can provide shareholders and citizens with the information needed to hold corporations and elected officials accountable for their positions and supporters. Shareholders can determine whether their corporation’s political speech advances the corporation’s interest in making profits, and citizens can see whether elected officials are “in the pocket” of so-called moneyed interests… This transparency enables the electorate to make informed decisions and give proper weight to different speakers and messages.

The Court expressed enthusiasm that technology can make disclosure “rapid and informative.”Unfortunately, disclosures are not required. Relying on publicly available data does not provide a complete picture of corporate political spending. For example, at many companies payments to trade associations that may be used for election-related activities are undisclosed.

As we can see from the 2016, getting “dark money” out of politics is critical if we are to live in a democratic society. I will be filing shareholder proposals requesting annual reports of political spending, including funds channeled through the U.S. Chamber of Commerce and others. I will file about ten proposals on this topic for the 2019 proxy season.

I see that BlackRock voted in favor of my proposal at PayPal this year, as did many public pension and SRI funds. However, many other funds vote to keep dark money in politics. Maybe I can get help from SumOfUs.org, Change.org and YourStake.org.  Funds should not be using our money and their votes to support dark money.

As Justice Kennedy wrote in Citizens United, “prompt disclosure of expenditures can provide shareholders and citizens with the information needed to hold corporations and elected officials accountable for their positions and supporters.”

Institutional and retail support of corporate political spending proposals has increased notably over a five year period (from 20% overall in 2014 to 28% this season).  (2018 ProxyPulseTM)