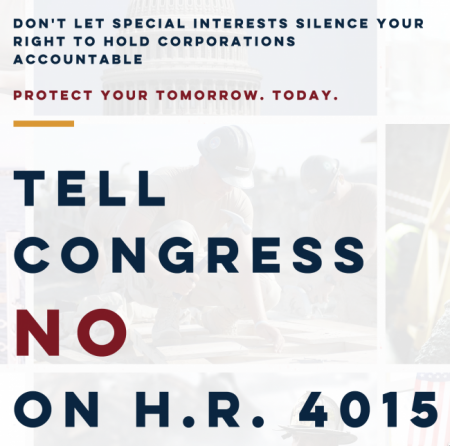 Protect the Voice of Shareholders is the name of a new website created by Institutional Shareholders Services (ISS) and the Council of Institutional Investors (CII). The educational website supports the current system, where institutional investors pay for and receive independent research and voting recommendations from proxy advisory firms for the public corporations in which they are owners.

The site was launched in conjunction with a new Morning Consult poll of nearly 2,000 registered voters that found voters do not want Senators to advance the mis-named Corporate Governance Reform and Transparency Act of 2017 (H.R. 4015). H.R. 4015 passed in December 2017 in the U.S. House of Representatives and that, among other changes, would permit public company management to potentially stall or block proxy adviser reports and recommendations to their investor clients.

H.R. 4015 would harm workers and retirement savers across the country who entrust institutional investors with making informed investment decisions with their hard-earned money. This poll makes clear that American voters want their pension, IRA, and 401(k) managers to continue to receive unbiased, independent research and recommendations from proxy voting advisers and do not support a new law that would change the current system.

The new website, Protect the Voice of Shareholders (www.ProtectShareholders.org), corrects the inaccurate rhetoric pushed by H.R. 4015 proponents and shines light on the powerful special interests that are pushing the legislation. ISS and CII encourage individuals to visit the website to understand why they have collaborated to provide clarity and transparency on these important issues.

While proponents of H.R. 4015 have created the illusion of problems in proxy advising that need fixing by Congress, what they really seek to do is minimize the voice of shareholders and investors on matters like CEO pay. H.R. 4015, would require proxy advisory firms to share their research reports and voting recommendations with the companies that are the subject of their reports and recommendations before they share them with their paying customers, institutional investors.

Giving companies the right to review proxy advisors’ work before it goes to actual clients is unprecedented interference in the commercial marketplace. In practice, it could have the effect of slowing down the issuance of these reports, giving institutional investors less time to do their own analysis. It could also have the effect of encouraging proxy advisory firms to skew their reports and recommendations in favor of companies and no longer allow institutional investors to receive the unbiased and independent information they find useful in assisting them in making informed proxy voting decisions.

Finally, H.R. 4015 would increase regulatory costs imposing higher barriers to entry for new firms to enter, or existing firms to remain in, the industry.

A Morning Consult poll of 1,975 registered voters, fielded August 27-29, finds H.R. 4015 to be an important bipartisan issue that Senators should take into account when considering legislation that would undermine institutional investors and their proxy voting advisers. The findings include:

Voters oppose H.R. 4015 and want their Senator to oppose it too

Institutional Investors should get first look at proxy adviser reports

More poll details can be found here. Full list of organizations supporting Protect the Voice of Shareholders effort. Congratulations to CII and ISS. I hope Protect the Voice of Shareholders will more reach more Americans than the fake news of the so-called Main Street Investors Coalition, which is spending millions to ensure corporations are controlled by managers and entrenched boards.

Your senator needs to hear from you, since up until now it’s been largely a one-sided debate driven by misinformation. By entering your contact information here, the Protect the Voice of Shareholders site will send a brief email to your senator encouraging him or her to oppose calls by special interests to pass this law, which will weaken investor and shareholder rights.