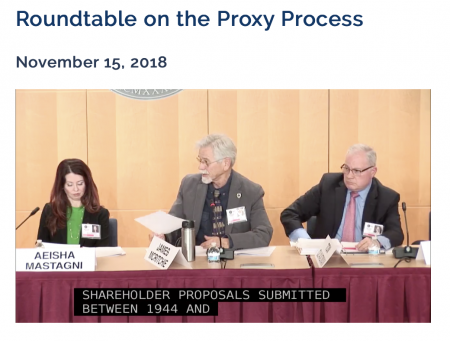 In the interest of documenting important events in corporate governance, I am here bookmarking the SEC Proxy Process Video from November 15, 2018, for future reference. Read transcript by downloading the following pdf: SEC TranscriptShareholderProposalsRoundtable. (full day)

Here is a link to comments filed for consideration by the SEC with respect to the Proxy Process Roundtable. Some of the more thoughtful comments are linked below:

Listed below are a few press reports on the SEC’s Proxy Process Roundtable.

The current somewhat modest threshold of holding $2,000 or more of a company’s shares for more than a year upholds a core principle of broad-based shareholder democracy. As several panelists noted, the quality of one’s ideas does not depend on the size of one’s ownership stake. Individual investors were represented on the panel by James McRitchie who ably defended the role average, truly Main Street investors can play… Another issue for discussion was whether a proposal should be entitled to appear on proxy statements over multiple years, if they do not receive significant shareholder support. Currently a shareholder proposal must be supported by 3% of shareholders to appear in the proxy a second time, 6% for a third, and 10% thereafter… Michael Garland, assistant comptroller for corporate governance and responsible investment at New York City Office of the Comptroller, told the story of what may have been the first “social issue” shareholder resolution and how support for it grew slowly. The proposal first filed in 1992 called for the creation of an anti-discrimination policy at Cracker Barrel, which had at one time an explicit policy against hiring gays. The SEC initially declared that this proposal, filed by the New York City Employees Retirement System, was not an appropriate topic for a shareholder proposal. The New York retirement systems challenged the SEC decision in court. While the lawsuit was unsuccessful, the resulting investor outcry later prompted the SEC to reverse its position in 1998, allowing the proposal to ultimately open the door for other proposals…

Looking back over time, the shareholder resolution system works. So why these discussions again? In great part, it is because the system has been effective in raising social and environmental issues to the fore and recognizing that they are, indeed, material issues for companies. In the end, there are many voices that would like to reduce attention to these fundamentally important issues and suppress innovative shareholder ideas, even where they have been shown to reduce corporate and shareholder risk over the long term.

According to the CII representative, instead of intermediaries voting the “fungible mass of shares,” voting of shares should belong directly to the beneficial owner; the use of blockchain or other distributed ledger technology would allow for traceable shares. In essence, there would be no need for all of these intermediaries, which just adds opacity to the system. In addition, he contended, participants in the system should be subject to market competition; to the extent there is a natural monopoly, it should be regulated like a utility. (To this point, Clayton noted that it was important to respect that the intermediary system was useful for trading and settlement in the context of trading.)  That didn’t mean, however, that near-term steps, such as routine and reliable vote confirmation, guidance on reconciliation and universal proxy, couldn’t be undertaken now…

[M]ost panelists for this topic seemed to view the shareholder proposal system as relatively smooth functioning and didn’t offer that much criticism. The representative of CalSTRS even went so far as to suggest that, since shareholder proposals constitute only 2% to 3% of the proposals, why try to remedy a problem that really doesn’t exist?…

The topic of reigning in the proxy advisory firms, which some view as having too much unaccountable power over proxy votes, has become something of a political hot potato.(See, e.g., this PubCo post and this PubCo post.) But the panel’s discussion regarding the power of proxy advisors was surprisingly tepid.

More than a dozen panelists at the roundtable agreed that increased use of electronic voting and the introduction of new technologies, particularly a blockchain-based system, or an immutable distributed ledger, could increase accuracy, as well as reduce the costs of shareholder and proxy votes. Perhaps more important, the five SEC commissioners’ statements concurred that it’s time for an update.

NAM/Chamber’s Campaign Encouraged Attendance – Recently, the National Association of Manufacturers & the US Chamber have been running ads against proxy advisors – including full-page spreads in the WSJ and Washington Post. They’ve spent six figures on their media campaign! Here’s what the ads looked like. As part of this campaign, the groups operate ProxyReforms.com – a site that had been encouraging folks to attend the last panel of the day (the one about proxy advisors).

Ahead of the roundtable, the National Association of Manufacturers, a trade body, and the US Chamber of Commerce spent almost $1m on an advertising campaign that said that it was time for reform of the proxy advice system.

Before you throw your hat in the air at the emergence of spokespersons for the small investor’s interests, there are a couple of things you should know about the Main Street Investors Coalition. First, it’s a creature of corporate managements and a front for their interests, not the individual investors’. Their goal is to narrow, not expand, the opportunities for shareholder interests to be brought before corporate boards and managements.

With little hope of overturning the say-on-play rule, which was mandated by law as part of the 2010 Dodd-Frank Act, the industry groups have instead turned their sights on so-called proxy-advisory firms like Institutional Shareholder Services and Glass, Lewis & Co.

Ken Bertsch, executive director of the Council of Institutional Investors, highlighted the SEC ‘s 2016 proposed rule that would require the use of universal proxies in contested elections as something to consider. Mr. Bertsch also endorsed looking into using blockchain technology in the proxy-voting process. The technology would ensure vote confirmation, enhance privacy and security, and reduce mailing costs, he said.

If the ultimate human investors do, in fact, want their funds to take social responsibility into account when voting their shares, why is that a problem for regulators to solve?…  it seems apparent that much of the ire about “factual errors” in proxy advisor recommendations is, in fact, a dispute about the content of their recommendations.  Business Roundtable’s comment letter to the SEC kind of gives the game away on this point (.pdf)… Commissioner Roisman said he had a new appreciation for how important proxy advisor recommendations are to shareholders, and that therefore it seemed reasonable to him that there be some kind of rebuttal period for companies to respond to firms’ recommendations and correct any errors.  Which to me suggests some foreshadowing of what the SEC is likely to do.

The SEC could be open to imposing a review period for issuers to assess the accuracy of proxy advisory firms’ reports prior to publication, SEC commissioner Elad Roisman said during an event hosted by the regulator last week… Meanwhile, a bi-partisan bill was introduced last Wednesday to the Senate Committee on Banking, Housing and Urban Affairs that would require proxy advisers to register as investment advisers under the Investment Advisers Act of 1940.

Meanwhile, a bi-partisan bill was introduced last Wednesday to the Senate Committee on Banking, Housing and Urban Affairs that would require proxy advisers to register as investment advisers under the Investment Advisers Act of 1940.

Barbara Roper, director of investor protection for the Consumer Federation of America which endorses the bill, is quoted in the press release for it. “This is a thoughtful and balanced bill that brings the benefits of government oversight to the proxy advisory business while recognizing, and strengthening, the fiduciary duty that these firms owe to their investor clients. The Consumer Federation of America strongly supports its adoption,” said Roper.

In a series of advertisements, press releases, reports and regulatory filings, industry groups including the U.S. Chamber of Commerce and National Association of Manufacturers have attacked the process of corporate elections as distracting from executives’ pure motives of creating jobs and economic growth… According to the Economic Policy Institute, the average CEO among the 350 largest companies got an 18% raise in total compensation last year to $18.9 million. That amount was roughly 312 times the pay for the typical worker, up from 20 times in 1965 and 58 times in 1989… With little hope of overturning the say-on-play rule, which was mandated by law as part of the 2010 Dodd-Frank Act, the industry groups have instead turned their sights on so-called proxy-advisory firms like Institutional Shareholder Services and Glass, Lewis & Co… Of the 62 cases disputes [to the SEC] cited [by the Chamber of Commerce] for 2017, some 34 stemmed from the advisers’ disapproval of executive-pay plans; most of the rest related to negative recommendations on specific board members.