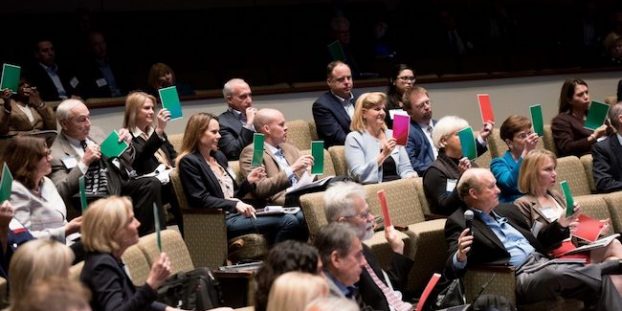 I just registered and booked for Directors Forum 2019. San Diego is a great place to be in January. The 14th annual Forum promises to be the best yet. Will you join us this year? Check out the agenda. Photos from the 2018 event. Here are a couple of my posts from last year’s Forum.

SEC Commissioner Robert Jackson Jr is up first. The SEC recently held their Proxy Process Roundtable. Have his own opinions changed since September? What can we expect going forward?

The most important issue in corporate governance today is dual class capitalization, and the most important recent development is the petition submitted on October 24, 2018 by the Council of Institutional Investors (“CII”) to both the New York Stock Exchange and Nasdaq, asking them to place a “sunset” on differentials in voting rights.

Coffee points out unseating provisions can be gamed. What does Jackson think of the proposed Long Term Stock Exchange, which seeks to offer disproportionate votes to long term holders?

I am also inspired by Jackson’s Stock Buybacks and Corporate Cashouts. So far, I have not had much luck addressing the issue through shareholder proposals. Will our rules stop giving executives incentives to use buybacks to cash out?

The always inspiring Jon Lukomnik is moderating the first session. I am curious about where he is going from IRRCi and what his next book will be. Will this be the traditional “hot topics” session or something new? Who will Robbins Geller Rudman & Dowd sue next?

It is great to see a panel on global risks. The Trump administration just released the “Fourth National Climate Assessment, Volume II,” which involved 13 different federal agencies and the work of more than 300 scientists. However, Trump downplayed the report, alleging that it focuses only on the most extreme predictive models. I doubt our panel will follow him down that road.

Then we hear “What Directors Need to Know about Blockchain.” My lettuce is tracked from farm to fork, why not my stocks and my proxy vote? This could be another driver as big as the Internet.

During our direct engagements with companies, we address the issues covered by any shareholder proposals that we believe to be material to the long-term value of that company. Where management demonstrates a willingness to address the material issues raised, and we believe progress is being made, we will generally support the company and vote against the shareholder proposal. (page 10)

So, they make a determination that voting for a shareholder proposal would be in the best interests of the company but they will vote against it if management leads them to believe progress is being made? Keith Johnson and Cynthia Williams called them out to the SEC. Will they be at lunch too?

Disconnects might result from misunderstanding that the fiduciary duty of loyalty in the exercise of proxy voting rights runs only to fund beneficiaries (who will benefit from improving company performance as soon as practical) rather than to the interests of company management or business goals of the fund manager.

Monday afternoon begins with a discussion of activism and hedge funds… always informative, especially when Andrew Shapiro talks about some of the battles at small-caps, where governance is often designed to entrench boards and management. After a break, GE, one of my worst investments, will be dissected as a case study. At diner we learn about Jack in the Box and lessons learned.

The final day discusses international directors; debates mandating for good; and will find us enraptured by John Carreyrou. His Bad Blood: Secrets and Lies in a Silicon Valley Startup chronicles the rise and fall of Theranos. Where were the directors? I almost got snookered myself. Too much fear of being left out.