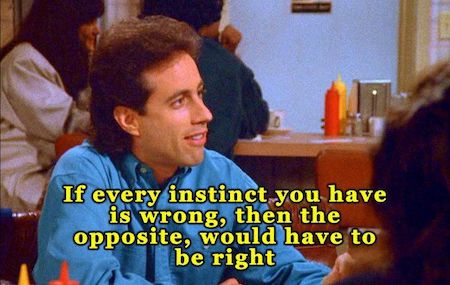 Do the Opposite was funny in the sitcom Seinfeld but not so funny when Franklin Resources does the opposite of shareholder proposals. In fact, doing the opposite threatens the existence of even the facade of democratic corporate governance, alive since 1947 with the legal right of shareholders to file and vote on proposals.

For readers too young to remember, Seinfeld was a TV sitcom about Jerry Seinfeld, a stand-up comedian. Jerry’s New York apartment was the center of a small world of eccentric friends focused on the minutiae of daily life. Jerry’s best friend, George Costanza, was an insecure complainer – miserly, dishonest, and petty –  in short, a loser.

In one episode George tells Jerry every decision he ever made was wrong. His life is the exact opposite of what it should be. Jerry convinces George “if every instinct you have is wrong, then the opposite would have to be right.” George experiments. ‘Do the opposite’ works, at least for that episode.

Do the Opposite: Background of SEC Loophole

Never underestimate the ability of SEC staff to parse the rules in a creative way. Staff Legal Bulletin No. 14H (CF) does not adhere completely to original intent, which staff determined was “to prevent shareholders from using Rule 14a-8 to circumvent the proxy rules governing solicitations.” …

The guidance still provides some wiggle room for companies to game the system by proposing the opposite. For example, if a shareholder proposes proxy access a company could invoke (i)(9) by countering with a proposal to deny any form of proxy access. However, in most cases that tactic will backfire. Whole Foods became something of a pariah last year when they put up a counter proxy access proposal to mine with thresholds that could never be met. (see Appeal of No-Action on Proxy Access at Whole Foods Markets (WFM)

I hoped no company would want to be a pariah on shareholder rights. No company would do the opposite of what shareholders want, since shareholders elect the boards. However, that was before Donald Trump became President and before many companies realized that share ownership has become so concentrated the interests of real “Main Street” investors can be ignored with impunity. Do the opposite is aided by a “Main Street Investors Coalition” with no real Main Street investors as members, stirring up fake news, like Russia’s involvement in the 2016 elections.

Regardless of what threshold you believe is best, I hope you will vote AGAINST the Board’s 25% proposal because they should not be able to hijack a shareholder proposal by simply submitting one of their own. That was principle SLB 14H attempted to establish but the poorly crafted language allowed a loophole for doing the opposite. Shareholders should have been given the choice to vote for the Board’s proposed threshold and mine. The winner would have reflected the preferred choice of shareholders.

Will Glass Lewis & ISS recommend against ratification and the against governance committee and/or board? See ISS and Glass Lewis Policy Updates for the 2019 Proxy Season. Even if they do, will it make any difference?

Do the Opposite: Trumpian Logic

As dual-class share structures proliferate, frozen charters protect entrenchment through supermajority majority standards and the “Big 4 continue to have a fiduciary blind spot,” we can expect more companies to do the opposite. There is no reason to see this strategy as limited to special meeting provisions.

Boards can eliminate almost any shareholder proposal with a ‘do the opposite’ board substitute. With SLB 14H, Rule 14a-8(i)(9) now means only that “a reasonable shareholder could not logically vote in favor of both proposals, i.e., a vote for one proposal is tantamount to a vote against the other proposal.” All boards need to do is ask shareholders to ratify the status quo and shareholder proposals disappear.

Do the opposite has a nice Trumpian logic that appeals to the base of those who prefer entrenched corporate governance royalty to the messiness of debate, compromise and something akin to democracy.

Doing the opposite, in George’s case, means being honest, treating women like people, speaking openly, confronting social situations directly, and having patience with others. No wonder his life improves—the opposite of George is a good person. The absurdity is totally obvious, and yet still funny. (The First Seinfeld Episode You Should Re-Watch on Hulu)

Doing the opposite of what shareholders request should make all stakeholders wonder about the ethical character of Franklin Resources. Is it the Constanza of funds? If Franklin Trust is NOT “miserly, dishonest, and petty –  in short, a loser” like George, why would they go down this road?

Do the Opposite: SEC Should Act

The essential principle at the core of capitalism is the assurance that investors’ money will be honorably managed by the corporate executives. That means if their interests are misaligned, shareholders can voice their opinion, take action and replace directors. That is much less likely if entrenched boards can replace any shareholder proposal with a newly minted sham board proposal.

Do the opposite lasted one episode on Seinfeld but has already run an entire season at the SEC.  Doing the opposite of what shareholders suggest does not make corporations funny or more endearing. We should not have to wait until Donald Trump’s successor appoints new members to the SEC for this strategy to be recognized as bad corporate governance.

In their oversight of financial markets, the SEC has a responsibility to all stakeholders to promote engagement and sustainability. Allowing board members to do the opposite by gaming SEC provisions designed to protect investors does the opposite of promoting the collaboration and consensus needed for value creation and confidence in our markets. Integrity is key to corporate governance principles. The Commission should order a new SLB to implement the original intent of Rule 14a-8(i)(9).

No person is your friend who demands your silence, or denies your right to grow. Allice Walker

Hopelessness is the enemy of justice. Injustice prevails where hopelessness persists. Bryan Stevenson