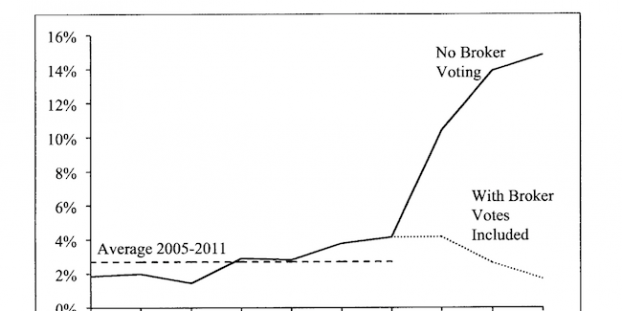 Thanks to Scott Hirst‘s articles and papers on the subject, I can borrow his catchy label for one of biggest current problems in corporate governance. Frozen charters are supermajority provisions that are impossible to repeal. He appears to attribute that to the 2012 change by the New York Stock Exchange (NYSE), which changed its policies to prohibit brokers from voting uninstructed shares on corporate governance proposals. I would lay a larger share of the blame on founders who wrote the frozen charters to forever retain a large degree of control. Regardless of who is to blame, frozen charters are a problem that needs fixed.  Managers, boards, shareholders, Republicans and Democrats should all be able agree on a solution.

My homeowners association faces the same problem. The developers wanted to make sure they maintained control. Twenty years later, long after they are gone, we cannot change critical articles and bylaws because of supermajority requirements. Like the provisions at corporations discussed by Hirst, the problem is that some people will just not vote. Some problematic governance provisions require a supermajority of not just those voting but all entitled to vote. I am not sure if the problems of my homeowners association will ever get sorted but Hirst outlines a good solution to frozen charters.

Frozen Charters: Some of My Efforts

For years, along with John Chevedden, the Steiner’s and others, I have tried to eliminate supermajority provisions at many companies. For example, I filed on various topics at iRobot (IRBT). Lately, I have agreed to withdraw based on their commitment to include multiple items as management proposals. Frozen charter provisions are now backed up like planes trying to land at O’Hare.

For example, the following items were included in the 2018 proxy to amend the certificate of incorporation: eliminate supermajority voting standards, declassify the board of directors, and allow shareholders to call special meetings. Although votes in favor of these items ranged from 99.4% to 99.6%, none achieved the affirmative vote of 75% of the outstanding shares required for approval. Frozen charters remain. I am told they will try again, so I did not file this year. I suggested they tell shareholders they will plant a tree for every account voted.

Another case of frozen charters in my portfolio is Clorox (CLX). There, a proposal to eliminate supermajority requirements only got 98.9% of the vote earlier this year, so again fell short of 80% of outstanding shares to pass. Scott Hirst identifies more in his Frozen Charter articles.

This autumn, I filed simple majority vote proposals at the following companies:

Please vote in favor of either my proposals and/or management’s to eliminate supermajority standards if you get the chance.

Hirst lays out various options and I briefly comment on some of them below.

[B]ecause the broker voting change was not a formal amendment to Rule 452, it avoided the considered process required for reviewing and approving such rule changes. Similarly, it could easily be undone by a similar information memorandum amending the NYSE policy on the matter. However, there may be reasons to believe that the NYSE will not wish to take action on the matter without going through the SEC rulemaking procedure. The most practical approach would therefore be for the NYSE to work with the SEC on developing a new policy for the treatment of broker votes on corporate governance proposals, and to submit that policy to the SEC for approval through the rule-making process.

Who is working on this and how can others get involved? Have the NYSE or SEC been approached? If you know, please contact me.

I am not sure the current SEC is the right one to tackle the issue, since they might have difficulty with constituents who want to bring back broker voting for other issues. I might just add this to my “Take Action” pile for a 2020 SEC, once new appointments are in place. In the meantime, I will try to get companies to motivate their shareholders by offering to plant a tree for each account voting or something similar. Additionally, we need to get ProxyDemocracy.org back online and get more retail shareholders referencing the votes of funds that announce their votes prior to annual meetings, such as the following: